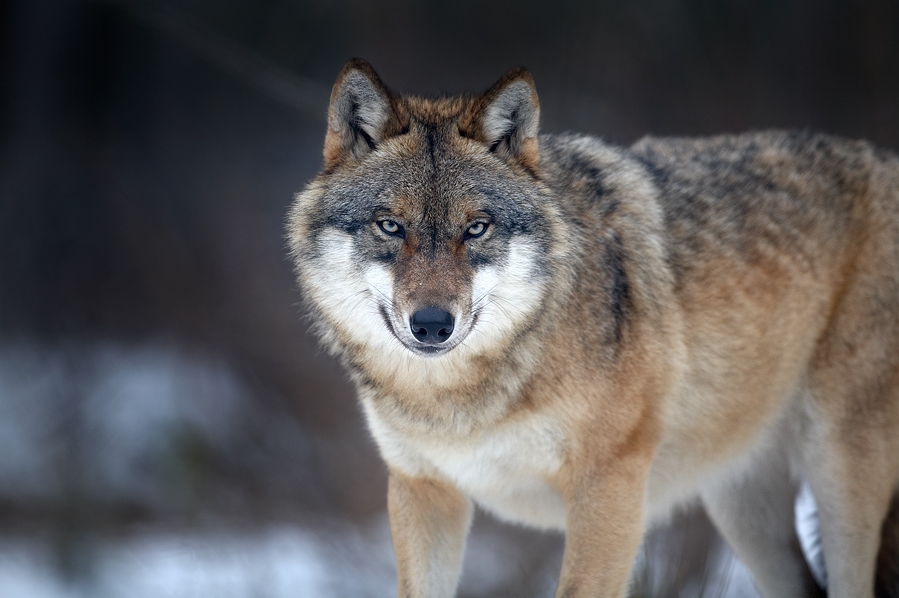 Mammals (Mammalia) are a class of warm-blooded, usually viviparous vertebrates that nurse their young: the mothers produce milk and use it to feed their young. They are part of the Amniota and as such are most closely related to the reptiles and birds. Mammals are distinguished from other animals by their protective hair, their well-developed brains and the specific structure of their skulls. More than 6400 species are counted among modern mammals. The mammals have both flying (bats) and swimming (whales) and both carnivorous (predators) and herbivorous (ruminants, among others) species. The largest animal of all time, the blue whale, and the largest living land animal, the African bush elephant, are both mammals. Mammals are found all over the world, except in the most extreme habitats. Man is also a mammal. Many mammals exhibit intelligent behavior. They are able to communicate with each other in different ways through sounds, smells and signals. Most mammals live in groups and form social structures, for example a harem band or a hierarchy. Some species are solitary and have a territorial lifestyle. From the Neolithic Revolution, many species of mammals were domesticated by humans. Domesticated mammals are still an important component of the human food supply (in the form of meat and dairy), supplying fur and leather. Mammals also play a role in sports, such as hunting or racing, and are used as model organism in science. More and more wild mammals are facing extinction, mainly due to human poaching and habitat destruction.

Mammals are warm-blooded vertebrates with – at least potentially – a body covering made up of hair. They breathe with their lungs and they suckle their young with breast milk, the secretion of their mammary glands. In addition to mammary glands, the skin also has sweat glands, which allow mammals to lose heat. With the exception of the cloaca animals, all species are viviparous. Characteristic is the construction of the lower jaw, which consists of one bone, and the three ossicles. Not all of the features listed are unique; for example, some sharks develop a placenta and birds are also warm-blooded. Both groups are examples of convergent evolution; both the warm-bloodedness of the birds (which descend from cold-blooded reptiles) and the placental development of the young in the sharks (an exception in the egg-laying cartilaginous fish) arose independently of the parallel features in the mammals. Unique to mammals are the fur, the ossicles, the lower jaw and the milk and sweat glands. Mammals are diploid organisms (the chromosomes come in pairs). In mammals, sex in almost all species is determined by the sex chromosomes: females have two X chromosomes and males have an X and a Y chromosome. Exceptions to this are, for example, the platypus, the echidna and Tokudaia osimensis. The total number of chromosomes (2n) varies greatly: from 2n6 in the Indian muntjac (Muntiacus muntjak), an Asian deer, to 2n118 in Dactylomys boliviensis, a South American rodent from the spiny rat family.

In all mammal species, fertilization takes place internally, with a penis introducing the sperm into the vagina. The sperm cells move through the cervix and uterus to the fallopian tube. Fertilization generally takes place in the fallopian tube. Although the more primitive members of the class (the cloaca animals, for example the platypus and the echidna) are oviparous, most mammals give birth to their young alive. In the marsupials (Metatheria) the young are still very little developed after birth and they remain after their birth

INSERT INTO `wiki_article`(`id`, `article_id`, `title`, `article`, `img_url`) VALUES ('NULL()','Zoogdieren','Mammals','In the marsupials (Metatheria) the young are still very little developed after birth and they remain after their birth','https://upload.wikimedia.org/wikipedia/commons/2/2e/Canis_lupus_2_%28Martin_Mecnarowski%29.jpg')