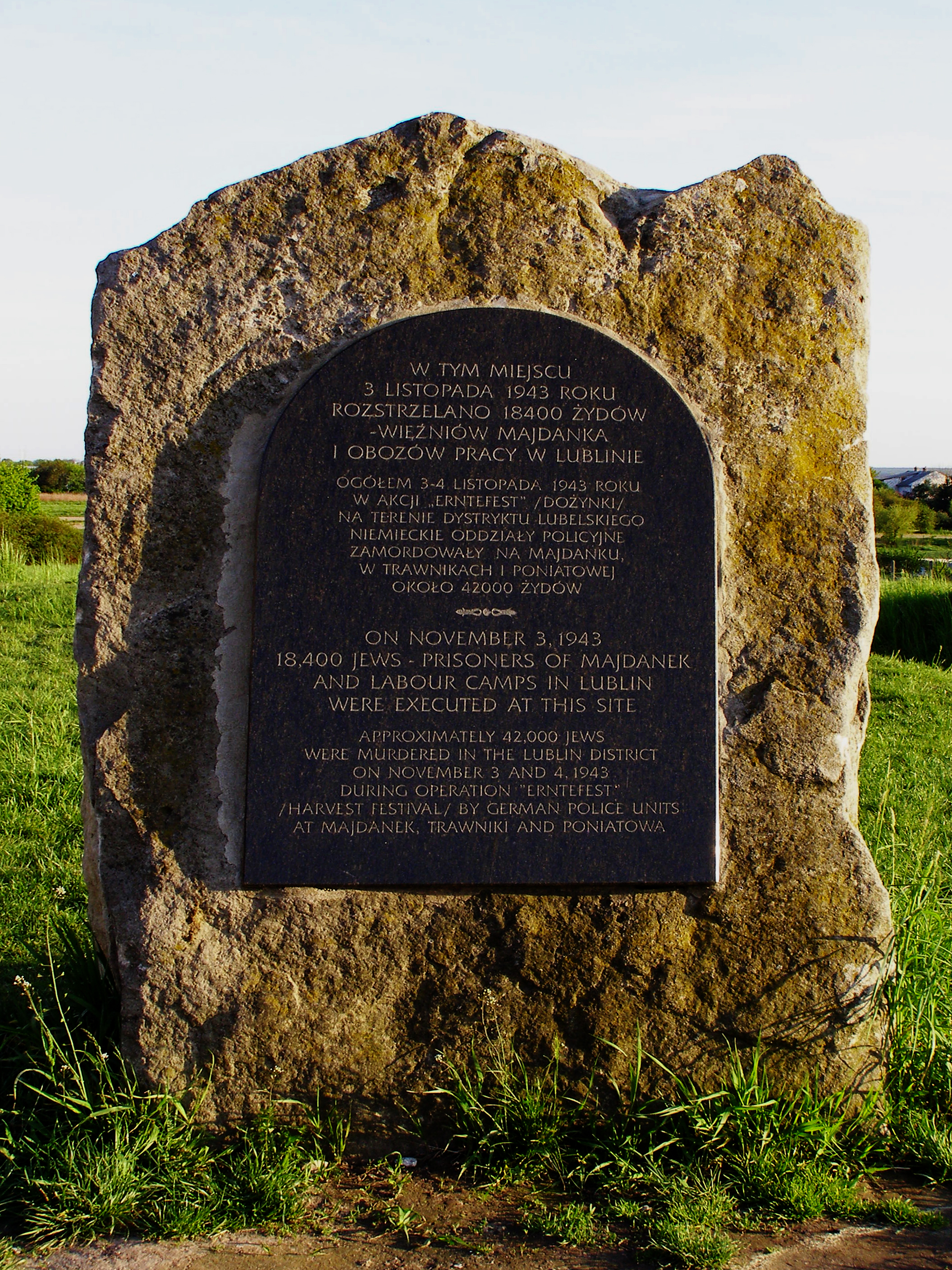 Aktion Erntefest ("Operation Autumn Party") was a German-led massacre of 42,000 Jews 3-4. November 1943 in the General Government, the German - occupied parts of Poland. The aim of Operation "Autumn Party" was to kill all the remaining Jews in the Lublin area in a quick and surprising operation. The massacre was mostly carried out while it was daylight on 3 November. The Jews were shot and dumped in mass graves in the Majdanek, Trawniki and Poniatowa camps. The mass graves were laid out in a zigzag pattern, probably to give the impression that they were a defense installation. Erntefest was the largest single massacre during the Holocaust and probably the largest single killing operation carried out by German forces during World War II. Several thousand policemen and SS men surrounded the camps. The victims were forced to lie in the mass grave of those who had already been killed with the so-called sardine method used by Friedrich Jeckeln. After the massacre, about 100 Jews from the Milejow camp near Lublin were taken to the Trawniki camp to burn the bodies there. The 100 Jewish workers were then shot and killed in pools where the survivors had to burn the dead. The last were burned by Ukrainian guards. In Majdanek, Erich Muhsfeldt and 20 Russian workers spent about a month burning all the bodies.

The background for the massacre was, among other things, riots in Warsaw, Bialystok, Treblinka and Sobibor earlier in 1943. The operation ended Action Reinhardt. In July 1943, there were about 203,000 Jews left in the General Government out of originally over 3 million. The massacre was ordered by Heinrich Himmler, chief executive of Schutzstaffel. A large proportion of those killed had been classified as important labor for war effort (kriegswichtig) indicating that Himmler had a strong notion of the Jews as a security threat and this ideological motive overruled economic considerations.

The operation was planned and ordered by SS chief Heinrich Himmler together with HSSPF Friedrich-Wilhelm Krüger. Christian Wirth had the operational management of the operation together with Sporrenberg. The operation was led by SS officer Jakob Sporrenberg, who succeeded Odilo Globocnik as SS and police chief in Lublin shortly before the operation. In 1944, Sporrenberg and parts of his staff were transferred to Norway, where he was SS and police chief for southern Norway. After the war, Sporrenberg was convicted by a Polish court and hanged in public. Operation Erntefest was a crucial point in the verdict. Erik Muhsfeldt participated in the massacre and was hanged in Poland after the war. Hermann Höfle participated and took his own life in 1961 in connection with a court settlement. Ordinary German police officers, including Reserve Battalion 101 from Hamburg described by Christopher Browning, assisted in the operation with guards and transport. The executioners were from the security police in Lublin.

SS judge Konrad Morgen was to investigate allegations of inappropriate behavior by Christian Wirth and came to the scene on November 5, 1943. Based on testimony, Morgen summarized a report he sent to Ernst Kaltenbrunner, head of RSHA. The report was presented as evidence against Kaltenbrunner during the Nuremberg Trials, in which Kaltenbrunner denied knowledge of the report. Morgen testified about the massacre in court settlements in the 1970s and 1980s.

From Erich Muhsfeldt's explanation during the court settlement. In Majdanek, the prisoners from the end of October 1943 had to dig wide ditches, about 2 meters deep, about 50 meters from the crematorium. Otto Moll and Franz Hössler came from Auschwitz with ten SS men. A total of around 100 SS men came from different places and they formed a special command (Sonderkommando). The camp was guarded by several hundred police officers with machine guns and other automatic weapons. Early in the day, November 3, the operation began. The barbed wire fence was opened and rows of policemen formed a corridor from the camp to the ditch. Naked Jews were chased from the camp to the ditch where p