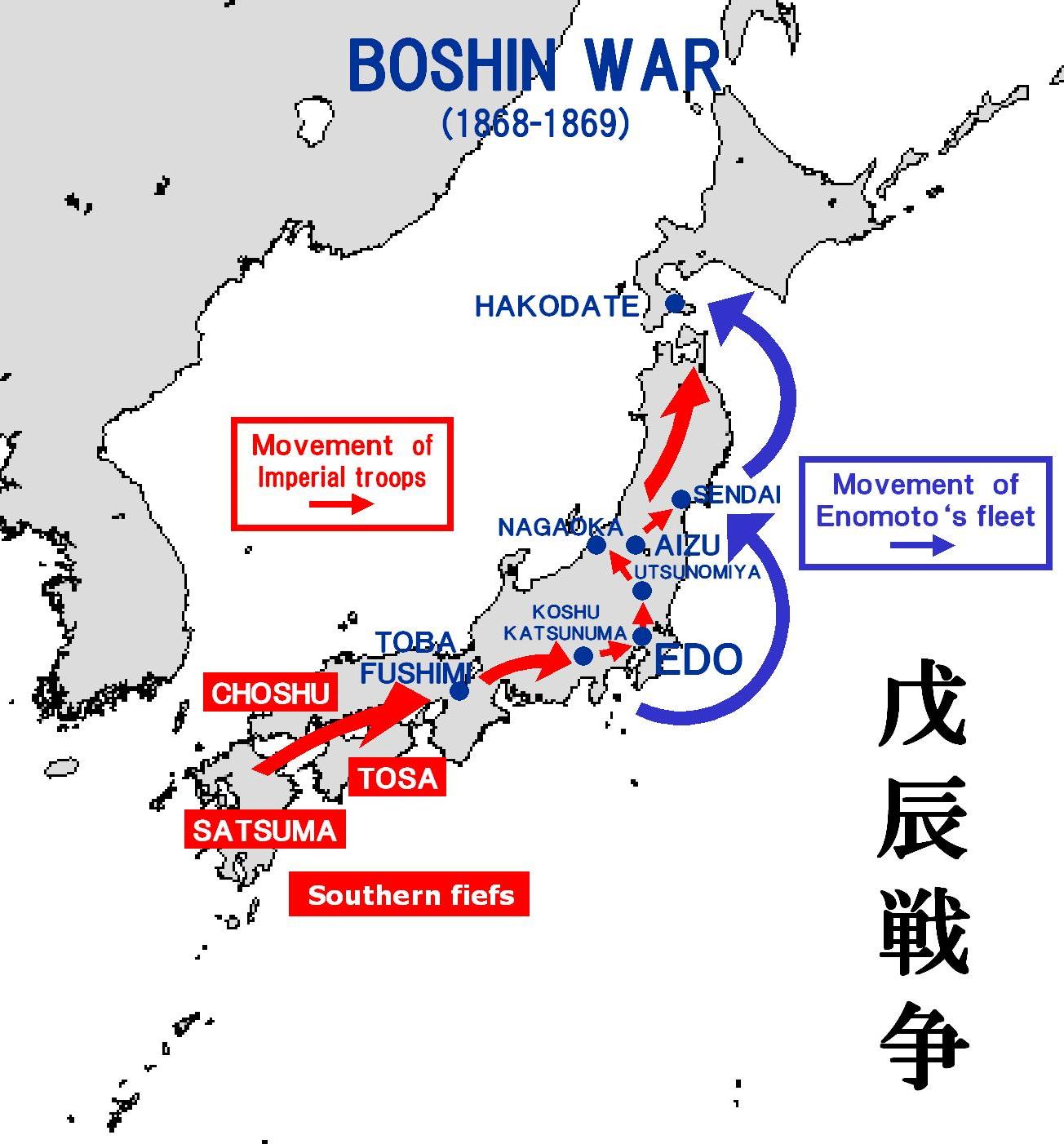 The Boshin War (Japanese: 戊辰 戦 争, Boshin Sensō, "War of the Dragon Year"), sometimes referred to as the Japanese Revolution, was a Japanese civil war fought between January 27, 1868 and June 27, 1869. The warring parties were the ruling Tokugawa shogunate and those who wanted power to be returned to the imperial court. The basis for the war was the dissatisfaction among the nobles and the young samurai over the shogunate's handling of the influence of foreigners after Japan was opened up to the outside world.

Increasing Western influence in the economy led to a decline similar to other Asian countries at this time. An alliance between samurai in western Japan, especially the domains of Chōshū, Satsuma and Tosa, and officials at the court, secured control of the imperial court and gained the influence of the young emperor Meiji. Tokugawa Yoshinobu, the sitting shogun, realized the seriousness of his situation and abdicated his political power to the emperor. Yoshinobu hoped that it would lead to his family being preserved and having the influence and power of the future Japanese government. However, military movements by the emperor's forces, violence by partisans in Edo, and an imperial decree abolishing and abolishing the Tokugawa House led Yoshinobu to go to war to conquer the emperor's court at Kyoto. The military development quickly turned in favor of smaller but relatively modernized imperial forces, and after a series of battles that ended with Edo surrendering, Yoshinobu also personally capitulated. Those loyal to the Tokugawa House withdrew to northern Honshu and later to Hokkaido, where they founded the short-lived Ezo Republic. The defeat at Hakodate defeated this last stronghold, leaving the imperial government as autonomous throughout Japan, completing the military phase of the Meiji Restoration. Around 120,000 men were mobilized during this conflict, of whom about 3,500 were killed. Finally, the victorious imperial faction renounced its goal of expelling foreigners from Japan, and instead switched to a policy of continuing modernization with the new goal of being able to renegotiate the various treaties with the Western powers. Due to opposition from Saigō Takamori, a prominent leader of the imperial faction, those loyal to Tokugawa were shown mercy, and many former leaders of the shogunate were later given positions of responsibility under the new government. The Boshin War testified that Japan had already achieved rapid modernization and was heading for a level of development similar to that of the industrialized nations of the West, but at the same time rejected free trade imposed by the West, which undermined Japan's economy. The war showed the great influence that Western nations, especially Britain and France, had on the country's internal politics and the rather turbulent establishment of the imperial power. Over time, the war was romanticized by the Japanese and others who viewed the Meiji Restoration as a form of "bloodless revolution," despite the large number of dead. The war has been filmed many times in Japan, and parts of the conflict were portrayed in the American film The Last Samurai (2005), starring Tom Cruise.