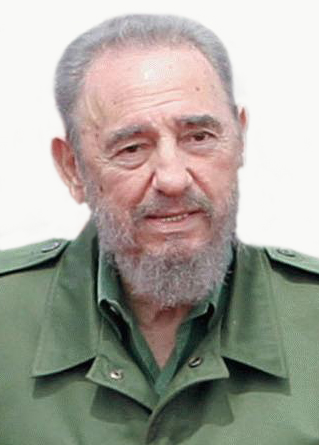 Fidel Castro (audio), originally Fidel Alejandro Castro Ruz (born August 13, 1926 in Birán in the province of Holguín in Cuba, died November 25, 2016 in Havana) was a Cuban communist revolutionary and dictator. He was Prime Minister from 1959 to 1976 and President from 1976 to 2008. Castro became prime minister in January 1959 after the Cuban Revolution, when the July 26 movement overthrew Fulgencio Batista, turning Cuba into the first socialist state in the Western Hemisphere during the period 1959–1965. He was prime minister until 1976, when he took over as president of Cuba. In Cuba, he carried out a radical land reform and collectivization of agriculture and nationalization of enterprises, combating illiteracy through a successful literacy campaign and developing a free health care and education system. At the same time, he has been criticized for violating human rights and for poor economic policy. On July 31, 2006, Fidel Castro temporarily handed over the presidency to his brother, Vice President Raúl Castro, after a serious intestinal disorder forced him to the hospital bed. Castro was then the head of state in the world who had been in power the longest. On 19 February 2008, he announced via the party newspaper Granma that he would not be re-elected president. The National Assembly elected Fidel's brother Raul Castro as its new president. He continued as First Secretary of the Communist Party until his resignation in April 2011.

Fidel Alejandro Castro Ruz was born out of wedlock to a sugar plantation in Birán, near Mayarí, in what is now the province of Holguín in eastern Cuba. He was the third son of Ángel Castro y Argiz, a working-class son who had immigrated from the poor region of Galicia in northwestern Spain. His father was a Falangist, a supporter of Franco, and had originally come to Cuba as a soldier to defeat the national liberation movement. His father made a fortune working for UFCO (United Fruit Company), for which he later became a contractor, and investing. For a profit, he bought land from UFCO and set up a sugar plantation that supplied goods to UFCO. Eventually he invested in a shop, bakery, sawmill and nickel mine. For the most part, approx. 300 families on the property. Fidel's mother, Lina Ruz González, who was a housekeeper, was also of Galician descent. Castro's father was married to another woman, Maria Luisa Argota, until Castro was 17, and the father did not recognize Fidel as his son until this marriage ended. and growing up he had to live with his illegitimacy in addition to being moved from foster care to foster care. As a child, he was often referred to as a "Jew" because he was not baptized. As a five-year-old, Fidel was sent to private tutoring with a teacher in Santiago de Cuba. He was frustrated, and as an eight-year-old he was sent to the Christian boarding school Hemanos de Salle, but was expelled due to bad behavior. In 1938 he was sent with Raul to the Jesuit school Colegio Dolores in Santiago de Cuba, and in 1942 to the Colegio de Belén (another Jesuit school) in Havana. Fidel excelled as a particularly talented student. He and Raul were expelled from school for a time because they had rebelled. Fidel Castro has six siblings, two brothers and four sisters - all born out of wedlock: Angelita (b.1923) Ramon (b.1924) Raul (b.1931) Juanita (b.1933) Enma (b. 1935) Agustina (b. 1938) In addition, Fidel has two half-siblings (Lidia and Pedro Emilio) from his father's first marriage.

Castro trained as a lawyer at the University of Havana. Despite the fact that Castro himself was "politically illiterate" at the time, he noted himself as a radical student activist at the university. He was passionate about anti-imperialism, and strongly criticized the United States' influence on Cuba and Latin America.