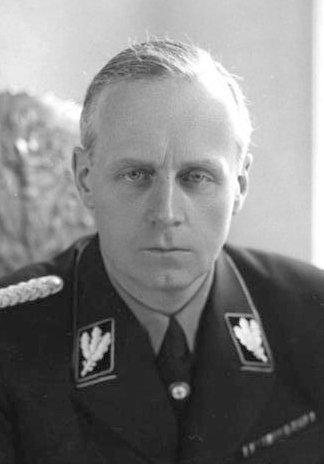 Ulrich Friedrich Wilhelm Joachim von Ribbentrop (born 30 April 1893 in Wesel, Germany, executed 16 October 1946 in Nuremberg) was a Foreign Minister of Nazi Germany from 1938 to 1945. He was a General (Obergruppenführer) of the Schutzstaffel (SS), the Nazi paramilitary elite force, and had a background as a diplomat and businessman. He played a key role in the negotiations on the Anti-Comintern Pact between Germany and Japan in 1936, and later the Molotov-Ribbentrop Pact between Germany and the Soviet Union in 1939. He played a minor role in the negotiations on the Munich Agreement in 1938. Ribbentrop believed that France and Britain would not go to war to save Czechoslovakia or Poland. He claimed that Britain would be intimidated into neutrality. He did not think the United States was a serious opponent of Germany. At the beginning of World War II, Ribbentrop advocated the invasion of Czechoslovakia and Poland. He gradually weakened his influence after 1939 when diplomacy became less important. Ribbentrop was against the German invasion of the Soviet Union in 1941. Ribbentrop had its own ability to take on half-conceived ideas from the Nazi leader Adolf Hitler and embroider these into great visions. Internally in Hitler's regime, he rivaled, among others, Marshal Hermann Göring and ideologue Alfred Rosenberg. Ribbentrop became involved in politics during the time of Hitler's takeover in 1933. He then had a career as a successful businessman in the trade in wine and spirits. Ribbentrop was the only leading Nazi with a Jewish circle of friends. As Foreign Minister, he became involved in the implementation of the Holocaust, the Nazi genocide of the Jews before and during the war. After World War II, the Allied victorious powers brought Ribbentrop to justice in the Nuremberg Trials, along with other German top leaders who had not committed suicide after the defeat of the war. He was sentenced to death and hanged.

Joachim Ribbentrop was born in Wesel in Rhinprovisen, without the noble predicate "von". His father Richard Ulrich Friedrich Wilhelm Ribbentrop (1859–1941) was a lieutenant colonel in the artillery and excelled in the First World War. His mother was Johanne Sophie Hertwig (1860–1902), and he had an older brother and a younger sister. The family name comes from the farm Ribbentrup near Salzuflen in Lippe-Detmold. He spent much of his childhood at Schloß Wilhelmshöhe in Kassel where his father was stationed. Around 1900, his father was stationed in Metz, at that time a German garrison town. Ribbentrop remembered his father as a stern and distant figure. As a widower, his father married Deta von Prittwitz und Gaffron, who came from a dynasty of Prussian landowners. In Metz, the French language was common, the family traveled to France on holiday and Ribbentrop spent some time at a French-language school in Grenoble. For a couple of years (while his father was out of service), the family lived in the resort town of Arosa, in Graubünden, Switzerland. In Arosa, Joachim and his brother got to know many in the city's international environment. Together with his brother, he traveled to London in 1909 to learn English from acquaintances from Arosa. In 1910, the two brothers traveled to Canada to visit acquaintances. Joachim lived in Canada until 1914. He first began teaching banking and worked from 1912 in the Canadian Railways. He had various jobs, including on construction and as a farm worker. Joachim Ribbentrop was known there as a pretty, well-behaved and cheerful boy. He also lived for a time in New York where he wrote reports for daily newspapers. He envisioned a future in Canada, and settled in 1913 in Ottawa. With the help of his mother's inheritance, he started as a businessman with, among other things, the import of German wines. In Ottawa, he met Prince Arthur, the son of Governor-General and Queen Victoria, and his Prussian wife. Ribbentrop had sports talent and did well in horseback riding and tennis. In Canada, he joined the national figure skating team and in 1914 participated in the tournament Ellis