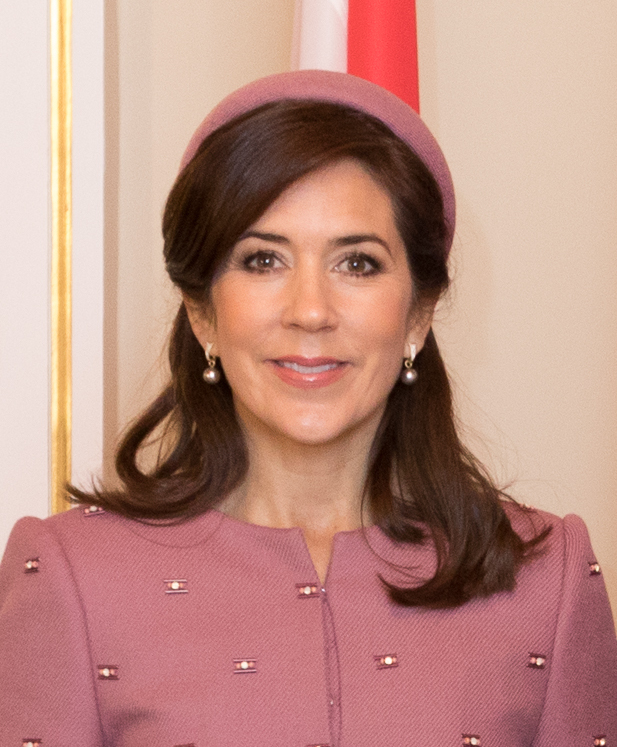 Crown Princess Mary of Denmark, Countess of Monpezat (born Mary Elizabeth Donaldson on 5 February 1972 in Tasmania, Australia) is married to Denmark's heir to the throne, Crown Prince Frederik. She is the daughter of Professor John Dalgleish Donaldson and Henrietta Clark Donaldson. Crown Princess Mary has a bachelor's degree in law and economics. Before she got married, she worked in marketing for DDB, Young Rubicam, Microsoft.

On October 8, 2003, Queen Margrethe gave her official permission for Crown Prince Frederik to marry the then Australian-British citizen Mary Elizabeth Donaldson. The couple was married in Copenhagen Cathedral on 14 May 2004.

On April 25, 2005, it was announced that the Crown Prince and Crown Princess were expecting their first child. On October 15, 2005 at 01:57, the Crown Princess gave birth to a well-built son, Christian Valdemar Henri John, with a weight of 3500 grams and a length of 51 cm. On October 26, 2006, the Danish court announced that the Crown Princess was pregnant with her second child. The Crown Princess was admitted on 21 April 2007 at Rigshospitalet in Copenhagen. Mary gave birth on Saturday, April 21, 2007 at 16.02 and well-built daughter. Weight: 3350 grams and length of 50 cm. The princess is the first princess born in Denmark since 1946. At her baptism on July 1, 2007, she was named Isabella Henrietta Ingrid Margrethe. On January 8, 2011, it was reported that she had given birth to twins on the same day, a 47 centimeter long boy weighing 2684 grams, and a 46 centimeter long girl weighing 2554 grams. The twin children were named Vincent Frederik Minik Alexander and Josephine Sophia Ivalo Mathilda.

Crown Princess Mary is the holder of the following Danish and foreign orders, medals and decorations.