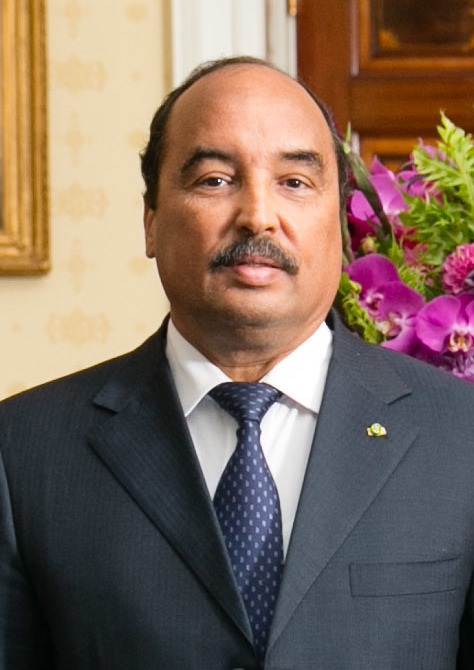 Mohamed Ould Abdel Aziz Ould Ely (Arabic: محمد ولد عبد العزيز ولد العظر; Muḥammad Uld ʿAbd al-ʿAziz Uld al-ʿLy; most commonly known as Mohamed Ould Abdelaziz with variations, born 20 December 1956 in Akjoujt in Inchiri in French Mauritania) is a Mauritanian officer and politician who since 2009 has served as the fourth president of the Islamic Republic of Mauritania. Abdel Aziz is a career soldier and high-ranking officer in the Mauritanian army. He led the coup d'état in August 2005, in which then-President Maaouya Ould Sid'Ahmed Taya was ousted. In August 2008, he led another coup that overthrew President Sidi Ould Cheikh Abdallahi. After this coup, Abdel Aziz became president of the State High Council as part of what was described as a political transition period before another election. In April 2009, he resigned from his post to run as a candidate for the Mauritanian presidential election in 2009, where he won with 52.58% of the vote, and where he formally represented the Union pour la République party. On 5 August of the same year, he took over the presidency. On 13 October 2012, he was shot and wounded in what official sources described as an accident.