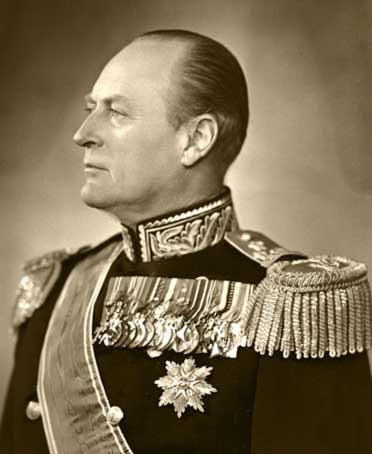 Olav V (born Alexander Edward Christian Frederik, Prince of Denmark, 2 July 1903, died 17 January 1991) was King of Norway from 1957 until his death in 1991. He was a member of the House Schleswig-Holstein-Sonderburg-Glücksburg and was born in Great Britain as the son of Prince Carl of Denmark and Princess Maud of Great Britain. He became crown prince and heir to the throne of the Norwegian throne when his father was elected king in 1905. He was the first heir to the throne of the Norwegian throne who grew up in Norway since Olav IV Håkonsson, and his parents took care to give him such a Norwegian upbringing as possible. In preparation for his future royal duties, he attended both civilian and military schools. In 1929 he married his cousin and third cousin Princess Märtha of Sweden. During World War II, his leadership was highly valued and he was appointed Norway's Chief of Defense in 1944. At his death, he was the last surviving grandson of Edward VII of Great Britain and his wife Alexandra of Denmark. King Olav had a popular and down-to-earth demeanor that made him popular and gave him the nickname "The King of the People". In a poll on NRK in 2005, Olav was named "Norwegian of the Century".

Olav was born in Appleton House at Flitcham on the Sandringham estate in Norfolk, England, and was the son of Prince Carl of Denmark, the later Haakon VII of Norway, and Princess Maud, daughter of Edward VII of Great Britain. He was christened Alexander Edward Christian Frederik and was Prince of Denmark, but was named Olav when his father became King of Norway in 1905. Crown Prince Olav was the first Norwegian heir to the throne since the Middle Ages to grow up in Norway. He went to public school. In 1921 he graduated in art at the private school Halling School in Oslo. Three years later he graduated from the War School. The Crown Prince continued his studies in economics and law at the University of Oxford. Olav was an athlete who jumped on skis in Holmenkollen and participated in several regattas. During the 1928 Olympic Games in Amsterdam, he won the gold medal in the 6-meter class with Johan Anker as helmsman. He was an active sailor until well into his older days.

March 21, 1929 Olav married his cousin, Princess Märtha Sofia Lovisa Dagmar Thyra of Sweden, born March 28, 1901, later Crown Princess Märtha of Norway. The Crown Princess died on April 5, 1954. The couple had three children, Princess Ragnhild, Princess Astrid and Prince Harald. In 1939, Märtha and Olav were on a three-month journey in the United States, while the children temporarily moved to the Palace in Oslo to be close to their grandfather. The Norwegian-Americans in the USA had long demanded visits from the Crown Prince and later the Crown Prince and Crown Princess, but without any success. Olav refused to visit the 1932 Winter Olympics in Lake Placid on personal grounds. The economic crisis was the reason why he refused to participate in the 1932 Summer Olympics in Los Angeles to defend his Olympic gold from 1928. There was also no trip to the United States in 1935 when an official invitation came from President Franklin D Roosevelt. Norway received a new invitation from President Roosevelt in 1938 to attend the world exhibitions in New York and San Francisco, and then the journey was completed. The Crown Prince and Crown Princess traveled through "Norwegian America", and they visited President Roosevelt at the country house in Hyde Park north of New York City. Olav gave over 300 speeches during the journey. The Crown Prince and Crown Princess traveled with the MS "Oslofjord" from Oslo to New York and with the DS "Stavangerfjord" on the return trip.

As Crown Prince, Olav had received extensive military training and education, and he had participated in most major Norwegian military exercises. Because of this, he was possibly one of the most knowledgeable Norwegian military leaders and was respected by other Allied leaders for his knowledge and leadership ability. During a visit to the United States before the war, he and his wife established a close friendship with President Roosevelt. These factors