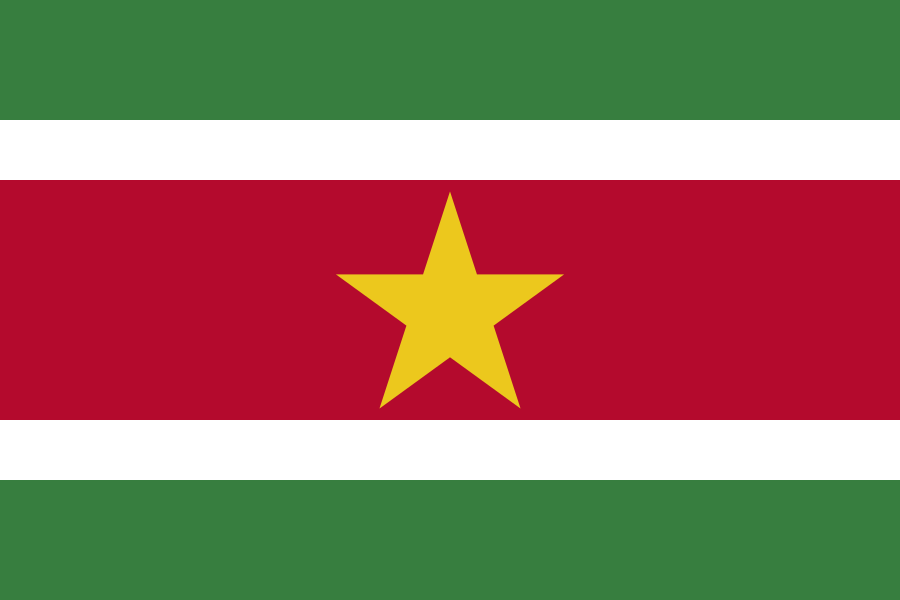 The Republic of Suriname is a country in the far north of South America, bordering the Atlantic Ocean to the north, Guyana to the west, Brazil to the south and French Guiana to the east. The country was formerly a Dutch colony, but became an independent state in 1975. Suriname is a member of CARICOM and is culturally considered a Caribbean country; it has strong cultural and economic ties to other caribbean nations.

Suriname is the smallest independent country in South America. It is located on the plate of Guyana and the highest point is Julianatop (1,286 meters above sea level). The country can be roughly divided into two parts. The north is cultivated land and where most people in Suriname live. The southern part consists partly of savannas and partly of tropical rainforest. Since Suriname is close to the equator, the climate in the country is tropical, and temperatures vary little throughout the year. There are two rainy seasons, from December to the beginning of February and from the end of April to the middle of August. Northeast of the country is Professor Doctor Engineer W.J. van Blommestein Meer, a large lake that was made in 1964 when a dam was built.

According to calculations made by the UN, in 2018 Suriname had a population of 568,301 inhabitants. As of 2018, the population of Suriname was divided into these ethnic groups: Indian 37% Creoles (European-African) 30% Javanese 15% Africans 10% (African slaves were imported to Suriname in the 17th and 18th centuries, and several of these fled into the country and formed their own societies) Chinese 2% (in the eighteenth century a number of Indians, Javanese and Chinese emigrated to Suriname) Native American population 2% Europeans 2% other ethnic groups 2%

Before the Europeans came to the country, a number of Indians lived in the area; primarily Arawaks and Caribbean. The coast of Suriname was first seen by Europeans in 1498 during Christopher Columbus' expedition, and in 1593 the area officially came under Spanish rule; without Spain creating colonies there. A number of Dutch trading posts were established along the coast from 1616, and in 1667 the colony of Dutch Guiana was established. From 1951 the colony gained more and more autonomy, and on 15 December 1955 the country became an autonomous part of the Kingdom of the Netherlands. Suriname became independent on November 25, 1975.

Suriname's economy is dominated by the bauxite industry, which accounts for more than 15 percent of the country's GDP and almost 70 percent of export earnings. The second most important export product is sugar. Suriname has some oil and gold reserves. About a quarter of Suriname's population works in the agricultural sector. Suriname's economy is highly dependent on trade with other countries, especially the Netherlands, the United States and the Caribbean.

Two places in Suriname are on the UNESCO World Heritage List: Central Suriname's nature reserve was added to the list in 2000, and consists of 1.6 million hectares of tropical rainforest. In 2002, the old, inner settlement in the capital Paramaribo was listed.