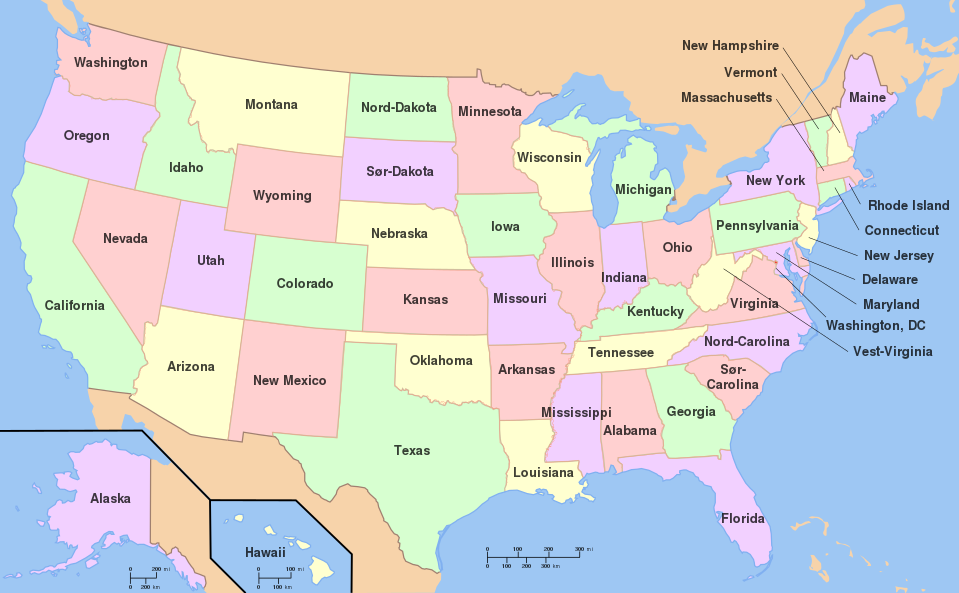 The states of the USA are the 50 states that together make up the USA (United States of America, in Norwegian United States of America). In the US flag, the 50 stars represent the current states, while the 13 stripes represent the original 13 colonies that in 1776 broke away from Britain and formed the United States. The growth in the number of states has largely taken place through "federal territories" gaining state status and internal self-government. The most recent states are Alaska and Hawaii, both of which were established in 1959. The states have their own laws, a state capital, their own flags and other symbols. The states have partly different demographics, history and culture. The United States is a federation. Under American law, states are sovereign entities, meaning that their power comes from the people rather than being delegated from the federal government. Federal laws take precedence over state laws in areas where the federal government has authority, but the US Constitution limits the authority of the federal government. All powers not expressly conferred on federal authorities by the Constitution are reserved to the Länder. The American Civil War (1861 to 1865) and the Supreme Court ruling "Texas v. White" ruled that states have no right to secede, and that, under the Constitution, they also have no right to pursue foreign policy.

Table of US states, with zip code abbreviations, state capital, largest city, state flag, year of incorporation into the union, population, GDP per capita in the state and the state's "popular name". Some states have several popular names. This overview shows "official" state names adopted by state assemblies, as well as names used on license plates and names that are considered very common. Names that are official or used on license plates are marked with (O) or (B) behind the name.