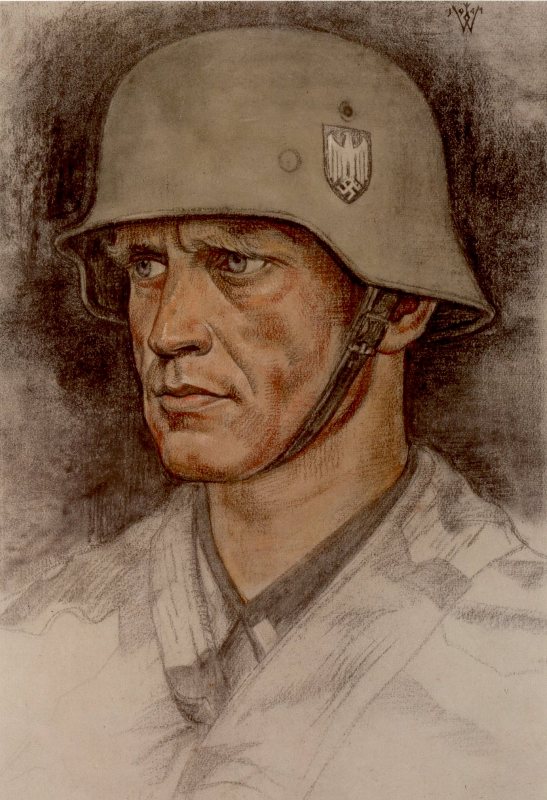 Wolfgang Willrich (born March 31, 1897, died October 18, 1948) was a German artist and art critic who created propaganda images for the Nazis in the Third Reich. He created heroic images with idealized, "Aryan" human types, and despised modernist, "degenerate art" (degenerate art) art that he eagerly helped to remove from public museums. Through postcards and posters in large editions, Willrich became one of the most famous artists in National Socialist Germany before and during World War II. Artistic work in National Socialist Germany In 1933, Willrich was hired by Hitler's government to create idealized portraits of "purebred" Germans and portraits of soldiers and party leaders. At the time, Willrich was well known for his portraits of war heroes and for his portrayal of the "noble Nordic" in folk life in the countryside. Many of Willrich's photos were sold in popular postcard format. He became especially known for members of the Hitler Youth collecting photos and often sending them to his heroes and role models to get an autograph. und Boden and evidence of preserved «Nordic» genetic material among the rural population. In 1935 he published a collection of works entitled Bauerntum als Heger deutschen Blutes ("The Peasant Population as Guardians of the German Blood") with an introduction by Walther Darré. SS chief Heinrich Himmler wrote the foreword to the subsequent release. With the support of Darré and Himmler, Willrich became one of the most popular artists in Germany during World War II. He published the book Des Edlen ewiges Reich ("The Noble Eternal Kingdom", about 50 pages) at Verlag Grenze und Ausland (first time 1939) with, among other things, portraits that in idealized form depicted "natural Nordic" beauty. Willrich's image of the popular General Erwin Rommel had the Ministry of Propaganda printed in poster size. Bernard Law Montgomery, Rommel's British counterpart, had Willrich's portrait of Rommel on the wall. Willrich was an ardent advocate of Nazi ideas about Blut und Boden. He otherwise had moderate influence in the Third Reich. He became a member of the SS in 1937. Willrich's pictures have since been reused by neo-Nazis.

Among other things, he painted a portrait of Lina Heydrich, "national security chief" Reinhard Heydrich's wife. He was worried that the many hours Lina spent with the painter could lead to an intimate relationship that threatened an already lame marriage. Reinhard was little at home, and Lina suspected that he was unfaithful. Reinhard, for his part, suspected Lina of having an affair with her friend Walter Schellenberg. It is unclear whether Lina Heydrich (who was young, under 30) and Willrich were intimate, and Heydrich himself arranged a demonstration of power against Willrich. In an interview in her older days, Lina Heydrich described Willrich as a terribly small man and lousy painter. Centrally, a woman sits partially undressed on her upper body and breastfeeds an infant, with a man and three older children around her. Everyone is blonde. The woman has clear similarities with Lina Heydrich, and Reinhard Heydrich therefore tried in January 1937 to stop broad publication of the picture. Reinhard assumed that the woman actually imagined Lina and that she was easy to recognize. He wrote a scathing letter to Willrich regarding the use of the image on the cover of Volk und Rasse magazine: “I must express my strongest dissatisfaction and demand that you immediately send me all reproductions and images of my family in your possession. The case will be reported to the Reichsführer SS [Heinrich Himmler]. " The case ended with Karl Wolff, Himmler's chief of staff, promising to stop further publication of the photo. B