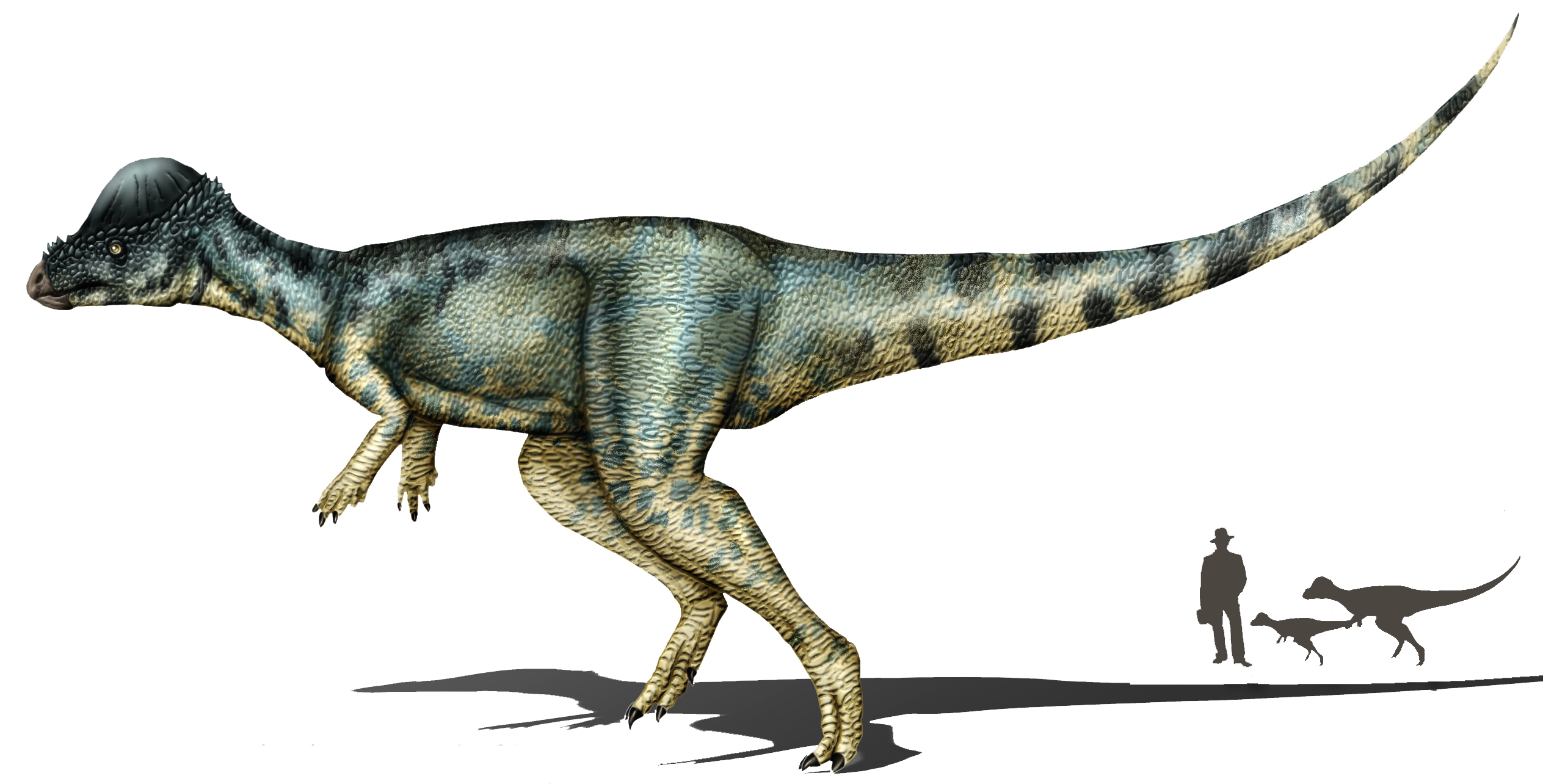 Alaskacephale - a genus of extinct dinosaur, marginocephalous from the pachycephalosaurus family. The animal inhabited the northern slopes of Alaska. North Slope Borrough was indicated as a typical location. It lived in the Late Cretaceous, in the Late Campaigns. His fossils (the holotype includes an incomplete left scale bone) were found in the rocks of the Prince Creek Formation belonging to the Colville group. The find was described in 2005 by Roland Gangloff and colleagues, in the title of his work mentioning that it was the first pachycephalosaurin from Arctic Alaska. The description showed that the animal had features unheard of in the pachycephalosaurs known so far. Given the poverty of the holotype, the diagnostic features of the genus and species must necessarily be of the squamous bone. It had two rows of bone nodules converging towards the median plane and diverging in the opposite direction. The bases of said nodules were clearly polygonal, and they also had prominent vertices. The generic name refers to the site where the remains of a typical specimen, Alaska, were found. The second part of the generic name, cephale, was used by Sullivan as a suffix often used in names of pachycephalosaurs. It comes from the Greek word cephalo, meaning head. A single species of Alaskacephale gangloffi is distinguished in the genus. It commemorates Roland Gangloff, who was the first to describe the holotype find, Sullivan also points to his contribution to increasing knowledge about the dinosaurs of the Arctic part of the North American continent. The genus belongs to the pachycephalosaurus family. Already the discoverer of the first find postulated to classify it to a lower taxon within this family, the genus creator departed from this. On the other hand, in more recent works the genus is included in the Pachycephalosaurini species. Moreover, Evans et al. In 2015 outright define the Pachycephalosaurini tribe as a clade that includes all descendants of the last common ancestor of Pachycephalosaurus and Alaskacephale.

The bones of a previously unknown dinosaur were discovered on the northern slopes of the Alaska Mountains, near the North Slope Borrough, which was later reported as a typical location. The find was described in 2005 by Roland Gangloff and colleagues, in the title of his work mentioning that it was the first pachycephalosaurin from Arctic Alaska. The holotype was marked with UAMAK-493-V-001. However, the researcher did not provide a formal description of the new taxon, which appeared a year later in RM Sullivan's review of pachycephalosaurs.

The Alaskacephale differed from its relatives in a double row of nodules on the scaly bone. These nodules, with a well-expressed polygonal shape at the base and a prominent apex, converged to the line of the median plane. These features were found by Sullivan to be diagnostic for the new genus Pachycephalosauria. The square bone appears to be connected to a scaly suture. Gangloff and others compared it to the homologue of the pachycephalosaurus. Sullivan, on the other hand, points out that it differs from the state found in all other Pachycephalosauridae, in which it has a triangular front and lies posterior-dorsal to the scalesbone. She further notes that its front end is flanked by two scales of the scales, antero-abdominal and postero-abdominal. There is no sign of finger-like indentations in any of the Pachycephalosauridae, and the whole thing is too far forward. Sullivan concludes that this is not a proper fusion of the bones, and thus negates the seam notion in both pachycephalosaurus and Alaskacephale. Rather, the researcher sees a remnant of a lateral fracture of the square bone below the junction with the squamous bone. At the same time, it warns against considering such a feature as diagnostic.

The generic name refers to the place where the remains of a typical specimen were found, i.e. the state of Alaska. The second part of the name ro