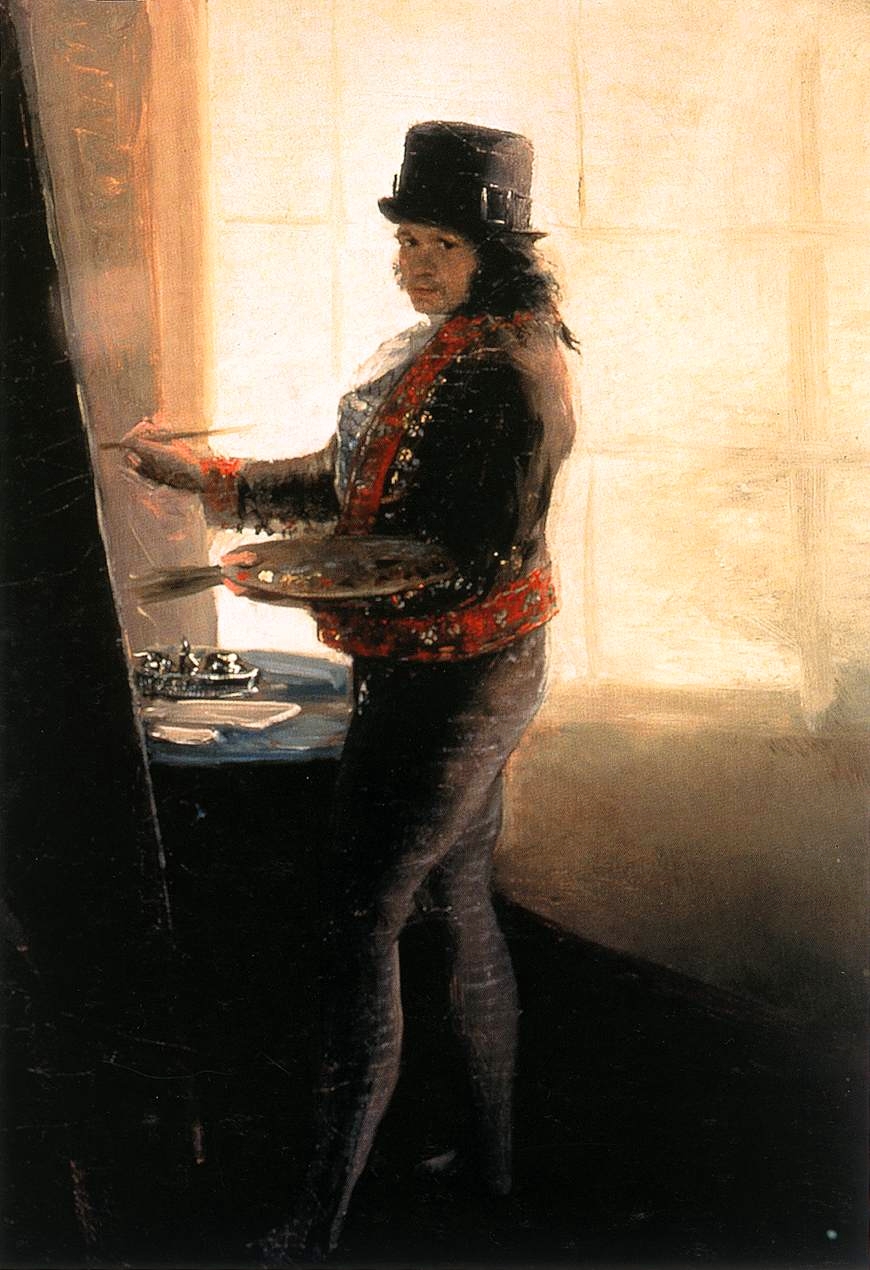 Francisco José de Goya y Lucientes (born March 30, 1746 in Fuendetodos, died April 16, 1828 in Bordeaux) - Spanish painter, graphic artist and draftsman of the Romantic period, court painter of Charles III Bourbon, Charles IV Bourbon and Ferdinand VII Bourbon, portraitist and painter genre scenes. Considered one of the most outstanding and original artists at the turn of the 18th and 19th centuries. Goya's artistic career stretches roughly between 1771, when he painted his first fresco in the Basilica del Pilar in Zaragoza, and 1827, when one of his last works was created, The Milkmaid of Bordeaux. During more than half a century of his professional work, about 700 paintings, 280 prints and about a thousand drawings were created. Working on his own unique style, Goya has evolved from the baroque and rococo, which permeate his first frescoes and tapestry designs, through neoclassical academism, to pre-romanticism and pre-impressionism visible in his last paintings and prints. The result of liberation from classical principles and the culmination of artistic expression is a series of black paintings. The subject matter he touches upon is very broad, including: portraits, genre scenes (hunting, folk scenes, vices of society, violence, witches and witchcraft), historical and religious paintings and still life. With regard to the number of works and their quality, the collection preserved in the Prado Museum in Madrid is particularly important. The artist is also widely represented in various museums around the world, especially through his portraits. His works can be seen at the National Gallery in London, the Metropolitan Museum of Art in New York, the Uffizi Gallery in Florence, the Old Pinakothek in Munich and many others.

He was born in the small village of Fuendetodos in Aragon in northern Spain, despite the fact that his family lived permanently in Zaragoza. He was the son of Braulio José Goya y Franque and Gracia Lucientes Salvador. The father of Basque origins was a gilder; his job was to cover picture frames, church decorations and furniture with gilding. The mother came from an impoverished Spanish noble family. Goya's grandfather was a city notary, which gave the whole family a lower-middle-class position and allowed for better education of the offspring. The future painter was baptized with the names Francisco José. He was the fourth of six children; he had three brothers and two sisters. Brother Tomás took over his father's profession and Camillo became a priest. In Fuendetodos, where the family was temporarily staying (probably due to the father's work), they lived in his mother's modest family home, the remains of a land estate. After a short stay in Fuendetodos, which coincided with the birth of Goya, the family returned to Zaragoza, where the artist spent his childhood.

From 1756 he attended one of the free Piarist schools (Escuelas Pías de San Antón), founded in the 17th century by St. Józef Kalasanty. There he met Martín Zapater, who remained his friend until the end of his life. Goya's abundant correspondence with Zapater (131 letters written between 1755–1801), which has survived to this day, is an important source of knowledge about the painter and his era. At the age of only 13, he began studying in the studio of the local painter José Luzán (1710–1785), who met Goya's father through his brothers goldsmiths. Luzán, who previously lived in Italy, adhered to the Neapolitan Baroque style and the works of Luca Giordana. During four years in Luzan Goy's studio, he learned the rules of drawing and painting techniques, and made numerous copies of the engravings from the teacher's collection. Twice (in 1763 and 1766), but without success, he tried to enter the Royal Academy of Fine Arts of St. Ferdinand in Madrid. In the years 1762–1763, commissioned by pro