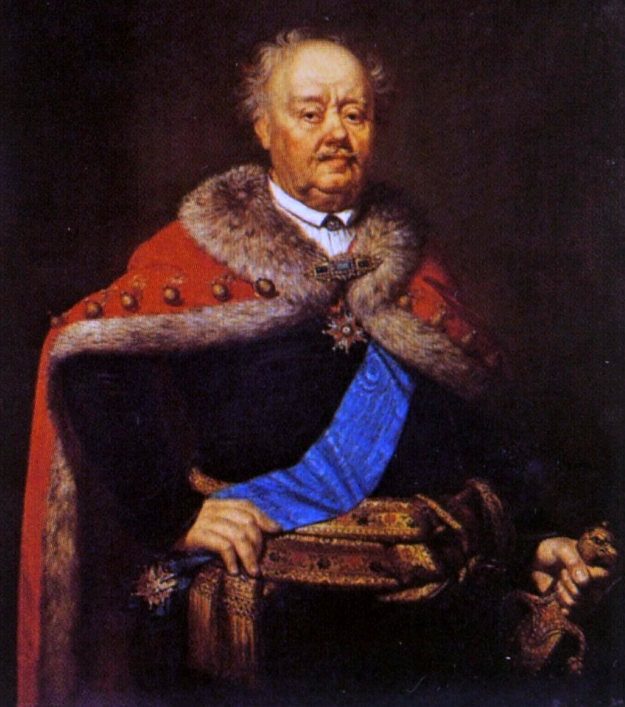 Franciszek Ksawery Branicki of the Korczak coat of arms (born around 1730 in Barwałda, died in 1819 in Biała Cerkiew) - first royal adjutant general in 1764, war minister in the Guard of the Laws, general of Lithuanian artillery in 1768-1773, field hetman of the Crown in 1773–1774, Grand Hetman of the Crown in 1774–1793, Lieutenant General of the Crown Army from 1764, Crown Lieutenant General from 1764–1766, General of the Russian Empire from 1795, Member of Parliament in 1752 and the Convocation Sejm (1764), Crown Hunter in 1766 , the headquarters of the Crown in 1764, the starost of Halych in the years 1763-1767. Opponent of the reforms of the Four Years' Sejm and the May 3rd Constitution, co-founder of the Targowica Confederation, during the Kościuszko Uprising considered a great traitor and sentenced to death in effigie.

He was the son of Piotr, the standard bearer of Halych and Waleria née Szembek, the castellan of Oświęcim. In 1754, he became the nobleman of the chamber, and at the turn of 1754/1755, chamberlain of Augustus III of the Saxon. He began his career as a soldier in the Seven Years' War in the Russian army, then the French army. He distinguished himself at Sarbinowo (Zorndorf) in 1758, commanding a squadron of Russian cavalry. For his merits in the French army, Louis XV honored him with the title of count (in Poland until the partitions, the title was not recognized). In 1765 he became a Knight of the Order of Saint Stanislaus. He was a member of the Seym in 1762. Elected a hood judge of the Halych region in 1764. Counselor of the Czartoryski Confederation in 1764. In 1764, he was the elector of Stanisław August Poniatowski from the Halych land and an envoy of this land to the election parliament. He was a member of the coronation Sejm in 1764 from the Zakroczym region. Commissar of knighthood in the Crown Military Commission in 1765-1770. In 1766, as a result of a pistol duel with the famous Giacomo Casanova, then residing in Poland, he was badly injured in the stomach. In 1766 he was a member of the Seym Czaplica from the Halych region. He was a member of the Radom Confederation in 1767. In the appendix to the dispatch of October 2, 1767 to the president of the College of Foreign Affairs of the Russian Empire, Nikita Panin, the Russian envoy, Nikolai Repnin, described him as an envoy for the implementation of Russian plans at the 1767 Seym for which the king, an envoy of the Sochaczew region to the 1767 Seym, is responsible. In 1767, as a deputy to the Repninian Seym from the Sochaczew region, he became part of the delegation, selected under the pressure of the Russian envoy, Nikolai Repnin, established to define the political system of the Polish-Lithuanian Commonwealth. As a regimentary, at the head of the Crown troops faithful to Stanisław August Poniatowski, he helped suppress the Bar Confederation in the years 1768–1772. On June 19, 1768, he captured Bar together with the Russian army. In 1770, due to the crisis in relations with Russia, Stanisław August Poniatowski appointed him his envoy in Russia, without an agreement with the Czartoryski family. On January 18, 1771, Branicki arrived in St. Petersburg. From there, he warned King Stanisław that if the Russian mission in Warsaw and its chief Kasper von Saldern did not come to an understanding with the Poles, the partition would take place, and so it did. In 1772 he went on a diplomatic mission to Paris. For these merits, Stanisław August Poniatowski granted him the Białocerkiew starosty and appointed him the great crown hetman. At the Sejm of Partition 1773-1775 he became a member of the Crown Distribution Commission, established to liquidate the property of the Jesuit Order dissolved in the Commonwealth. Member of the Andrzej Mokronowski confederation in 1776. At the Sejm of 1778, he became a consultant of the Perpetual Council. Member of the Military Department of the Permanent Council in 1779. He was a member of the confederation of the Four-Year Seym. He was chairman of the Military Commission of the Two Nations in 1788. In July 1791, in agreement with Grigory Potemkin, he organized the kidnapping of King Stanisław August from Łazienki.