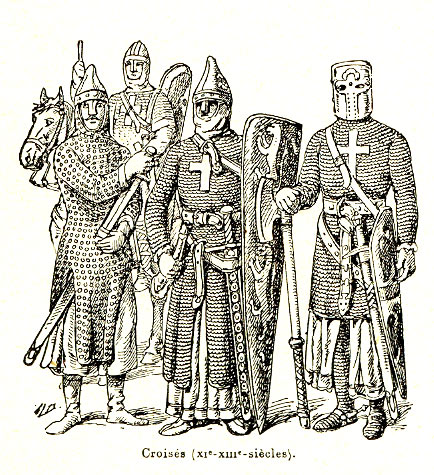 The First Crusade (First Crusade) - a war expedition that started the period of armed crusades, started by Pope Urban II with the appeal at the synod in Clermont on November 27, 1095. The expedition set out in 1096, with the dual goal of conquering Jerusalem and the Holy Land and freeing Eastern Christians from Islamic rule. It all started thanks to the Byzantine emperor Alexius I Comnenus and his appeal to the Roman Church and the Western knights for help in the fight against the Seljuk Turks to regain lost lands in Anatolia. The call for help quickly turned into a mass migration from the West and the conquest of areas outside Europe. Both knights and peasants set out from many corners of Western Europe by land and sea to Jerusalem, finally conquering it on July 15, 1099, establishing the Kingdom of Jerusalem along with the other Christian states of the Cross. Although these acquisitions lasted less than two hundred years, the first expedition was a significant turning point in the history of the expansion of Western civilization, as well as the first serious step, from the fall of the Western Roman Empire, towards the reopening of access to trade with the East. This first expedition, as the only one in the entire history of the Crusades, was a complete success.

The emergence and rapid development of the Turkish Seljuq state caused the Turks to take control of the entire Middle East. From 1079, Jerusalem was in the domain of Tutusz Ibn Alp Arslan. In 1071, the Sultan of Alp Arslan dealt a devastating defeat to the Byzantine forces at the Battle of Manzikert, destroying the Empire's military foundations and its ability to defend Christianity in the Middle East. In the years 1071-1085, the Turks, taking advantage of the chaos reigning in Byzantium and internal wars between the candidates for power, took over almost all of Asia Minor. Under the rule of Muslims, Nikkea became the capital of Sultan Sulajman Ibn Kutulmisz. The reign of Emperor Alexius I Comnenus in Asia was territorially limited to fragments of the Black Sea coast and isolated cities on the shores of the Mediterranean Sea. The Seljuk state, however, soon disintegrated into many smaller states, which often waged wars among themselves, which gave the Byzantine Empire a good chance of regaining Anatolia and Palestine. However, the Byzantine army after the Battle of Manzikert was too weak, and the imperial treasury was empty. A request for help from Emperor Alexius gave Pope Urban II the excuse to declare a crusade to reclaim lost territories and take control of Jerusalem. In 1095, Urban II officially announced the beginning of the Crusade. He did so in his closing speech at the Clermont Synod. This sparked the enthusiasm of the audience, and right after that, the sign of the crusades - the red cross - was also chosen. The date of the beginning of the First Crusade was August 15, 1096, the time immediately after the harvest, optimal due to the possibility of supplying a large army.

In response to the appeal of Pope Urban II, already in March, a huge crowd of civilians (about 20,000 people), led by a charismatic, but unknown monk called in the sources Peter the Hermit or Peter of Amiens, set off on a crusade. The expedition had already set off at the end of 1095, but it was badly organized and almost militarily worthless. It consisted mainly of peasants and the poor, but also common criminals who broke away from the main march and committed several large pogroms of Jews in Germany. One of such groups was defeated by Hungarian troops at the Battle of Wieselberg. Most of the expedition's participants reached Constantinople via the Balkans, but the Byzantine emperor, Alexios I Comnenus, would not let