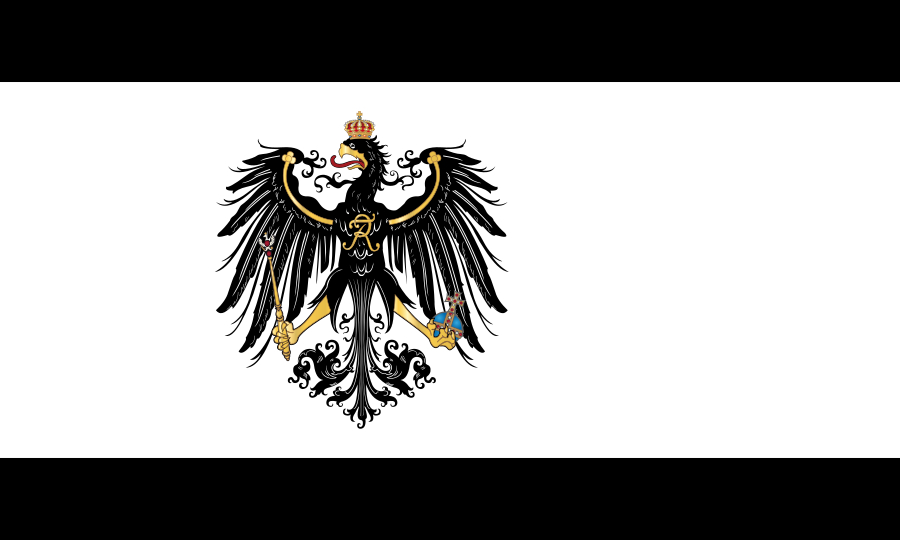 {{State infobox}} Unknown fields: "p2_flaga", "density_place", "i1", "p1", "language_used", "i2_data", "i1_flaga", "p1_flaga", "s1_flaga", "i1_data", " s1_data "," s1 "," n1_flaga "," p2 "and" i2 ". The Kingdom of Prussia (German: Königreich Preußen) - a state created by elevating the Duchy of Prussia to the rank of a kingdom in 1701. The resulting state also took over the other domains of the Hohenzollern dynasty (including the Brandenburg Electorate). In 1806, after the dissolution of the Holy Roman Empire, its rulers lost their rights as the prince-elector of the Reich. In the years 1815-1866 a member state of the German Union, in the years 1866-1871 the North German Union, in the years 1871-1918 the German Empire. The King of Prussia was at the same time the German emperor, and Prussia in the Empire had a hegemonic position. The territory of the Kingdom of Prussia comprised two-thirds of the entire area of ​​the German Empire.

From 1618, the Brandenburg Electorate and the Duchy of Prussia were in a personal union as Brandenburg-Prussia. The kingdom was established at the time of the coronation of the Brandenburg elector Frederick III in 1701 from the former state of Brandenburg-Prussia. Frederick assumed the title of king in Prussia, German König in Preussen, and not king of Prussia. The coronation took place in Königsberg, which was the traditional capital of the former Duchy of Prussia, but Berlin remained the center of the Hohenzollern state as a whole. One of the first people to congratulate Fryderyk was the then Polish king and the Saxon elector August II the Strong. At that time, however, this title was not recognized by the Sejm of the Republic of Poland, which from the legal point of view was tantamount to its non-recognition by the Polish state, so August II could only submit it as the elector of Saxony. However, this title was recognized by the majority of other major European countries in the political arena: Austria, Sweden, Russia, Great Britain, the Netherlands, and Denmark. In 1713, after the war of the Spanish Succession, France and Spain also recognized the royal dignity of the rulers of Prussia and Brandenburg (in this war, France and Prussia fought on opposite sides). The Weakened Republic of Poland recognized this title only at the Convocation Sejm in 1764, as a result of Russian pressure and Prussian bribery, and the Holy See in 1787. Emperor Leopold I of Habsburg, the formal head of Elector Frederick in the German Reich, agreed to the coronation in exchange for the support of Brandenburg-Prussia for the succession of the Austrian Habsburgs in Spain. Protests from the Teutonic Order were refuted by the Prussian lawyer P. Ludevig, who proved the absolute lack of any rights of the order to these lands, incl. through the Welaw-Bydgoszcz treaties, justifying the full sovereignty of the Hohenzollern house in this territory. Prince-elector Frederick III proclaimed himself on January 18, 1701 in Królewiec king in Prussia (German: König in Preussen, implicitly Ducal, in which they were sovereigns from 1657), because the title of King of Prussia was due from 1466 to the Polish rulers, and took the name of Frederick I It was also related to the desire to avoid a conflict with the Commonwealth, as the name "Prusy" also included Gdańsk Pomerania. The Prussian ruler could not be crowned in Brandenburg, formally belonging to the Holy Roman Empire, and thus being part of the German Kingdom and under the imperial sovereignty. In August 1757, during the Seven Years' War, the Kingdom was seized by the Russian army, and in December of that year, Empress Elizabeth issued a decree about its incorporation into the Russian Empire. The Königsberg Castle became the seat of the Russian governor from then on. However, the miracle of the Brandenburg house, i.e. the death of the tsarina in 1762, resulted in the restoration of the Hohenzollerns' power. Frederick II the Great in 1772, i.e. after the First Partition of Poland, as a result of which he obtained Royal Prussia, prov