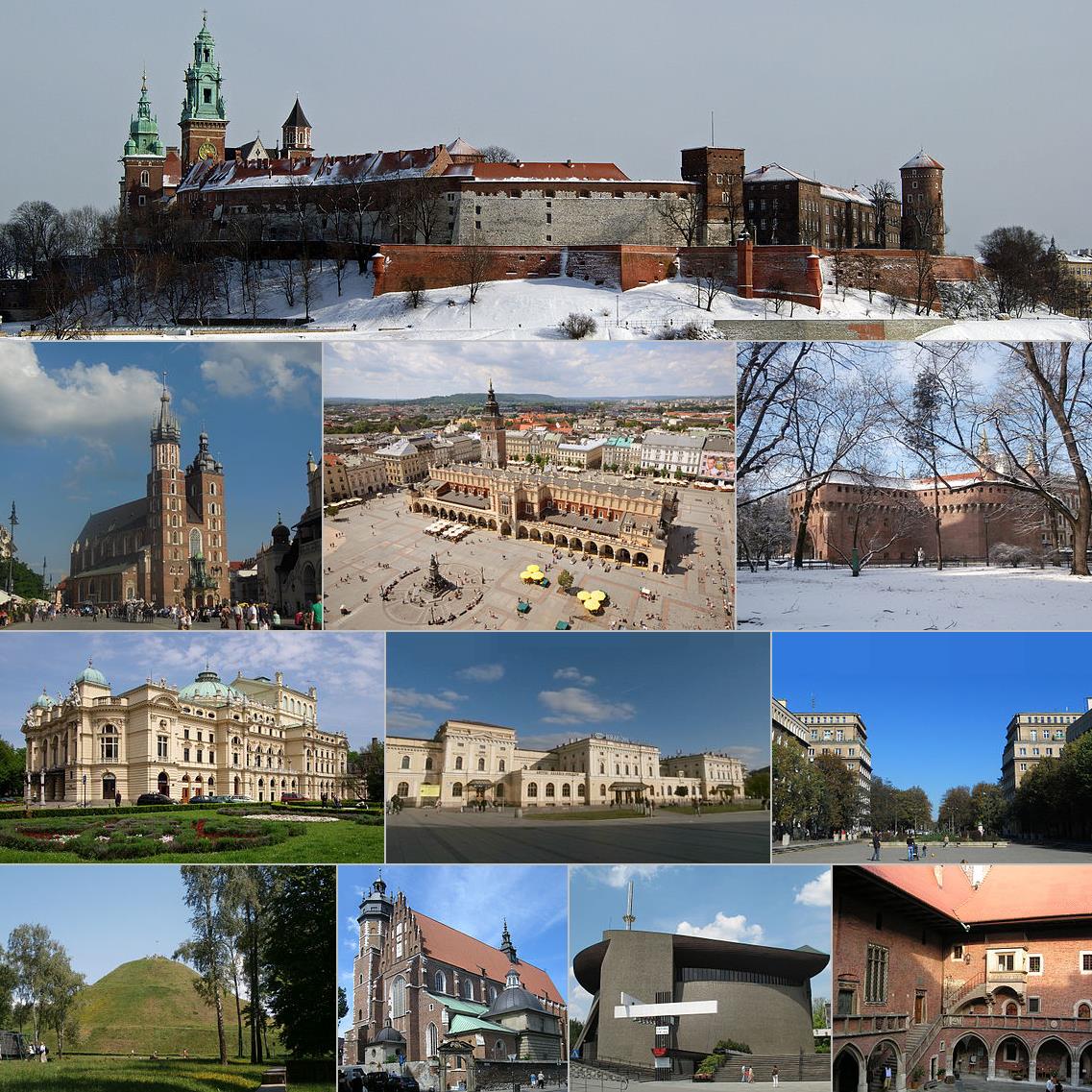 Kraków, the Royal Capital City of Kraków (Latin Cracovia, German Krakau, Yiddish קראָקע Kroke) - a city with poviat rights located in southern Poland on the Vistula River, the second largest city in the country in terms of population and area. The formal capital of Poland until 1795 and the coronation town and necropolis of Polish kings. From 1000 continuously the capital of the Krakow diocese (one of five in Poland at that time), and from 1925 the archdiocese and metropolis. Founded before 1228, again in 1257. Since regaining independence in 1918, the voivodeship city (since 1999 the seat of the authorities of the Małopolska Voivodeship), is also the central metropolitan center of the Krakow agglomeration and the Krakow Metropolitan Area. Krakow is the capital of the historical Małopolska. It is situated in the area of ​​Brama Krakowska, Basin Nidziańska and Pogórze Zachodniobeskidzkie. The headquarters of, among others, the Polish Academy of Arts and Sciences, the National Science Center, the Oil and Gas Institute - the National Research Institute, the National Research Institute of Animal Production, the National School of Judiciary and Public Prosecution, the headquarters of the Polish Special Forces, which is also one of several NATO special forces commands, Land Operations Center - Land Component Command, Polish Ski Association, European Union Operational and Strategic Command, NATO Counterintelligence Expert Center, National Center for Hadron Radiotherapy, Central Mountain Tourism Center and Institute of Forensic Expertise. Prof. Dr. Jan Sehn. The oldest Polish university, the Jagiellonian University, has been operating in the city since 1364, and there are cultural institutions of national importance and status, including: Wawel Royal Castle, the National Stary Theater, Juliusz Słowacki in Krakow, the National Museum, the National Pantheon, the Crypt of Merit at Skałka, the Crypt of the National Poets at Wawel, the National Archives, the Jagiellonian Library, the Book Institute, the Institute of Literature, the Center for Special Operations, and the National Rugby Center. A city with poviat rights serves as an administrative, cultural, educational, scientific, economic, service and tourist center. Kraków is the second largest, after Warsaw, market for modern office space (over one million square meters of office space), as well as one of the key railway junctions in Poland.

Krakow is located in southern Poland, in the central-western part of the Lesser Poland Voivodeship on the Vistula River; on its territory there are estuaries of the Vistula tributaries: Białucha (the lower course of the Prądnik), Rudawa, Dłubnia, Drwina Długa and Wilga. Krakow is located at the junction of several geographic regions: the Kraków Gate, the Oświęcim Basin, the Sandomierz Basin, the Zachodniobeskidzkie Foothills, and the Kraków-Częstochowa Upland. The location of Krakow makes it a base for trips to Polish mountains or trips to the picturesque Krakow-Częstochowa Upland. The city has a longitudinal extent of 18 kilometers and a latitudinal length of 31 kilometers. Within the administrative boundaries of Krakow, the meridian of 20 ° E and the parallel of 50 ° N intersect (the only case of intersection with full tens of degrees in Europe). The following communes are neighboring Krakow: Igołomia-Wawrzeńczyce, Kocmyrzów-Luborzyca, Koniusza, Liszki, Michałowice, Mogilany, Niepołomice, Skawina, Świątniki Górne, Wieliczka, Wielka Wieś, Zabierzów, and Zielonki. These communes belong to three poviats adjacent to Kraków: Kraków, Wieliczka and Proszowice.

The Vistula valley constitutes the city's longitudinal axis. The river network consists of the Vistula, its right tributary, the Wilga, and the left tributaries of the Rudawa, Białucha, Dłubnia, Sanka and others.