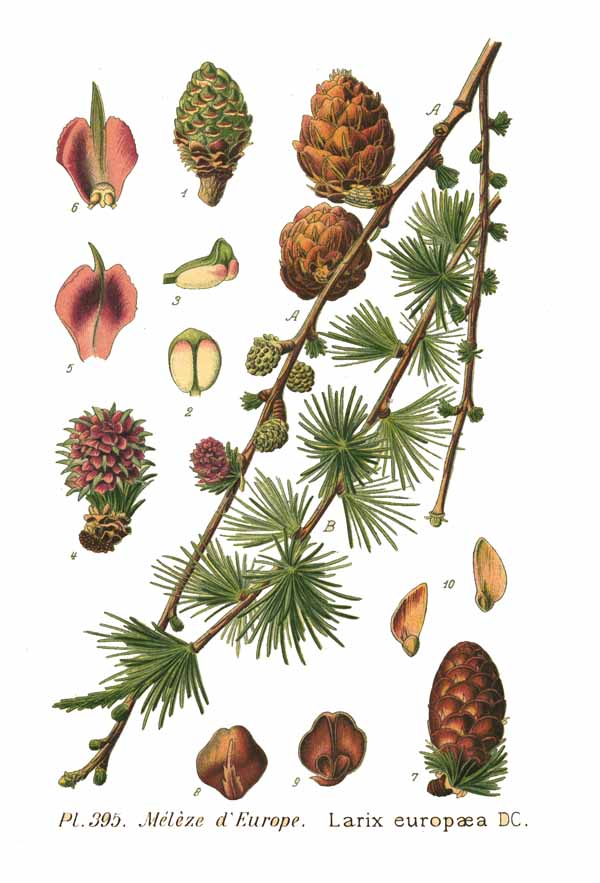 Larch (Larix Mill.) - a genus of trees of the pine family. It includes 10 species, in some views a dozen or so species. They are found in the temperate and cool regions of the Northern Hemisphere. In the temperate zone they inhabit mountain areas, in the cool zone they grow in boreal forests and lasotundra, being the northernmost trees. In Poland, typical European larch L. decidua subsp. decidua growing in the Tatra Mountains, where it reaches the upper forest border, and Polish European larch L. decidua subsp. polonica growing in the central and south-eastern part of the country. In addition to native species, the following were introduced to Polish forests: Japanese larch L. kaempferi and Eurojaponian larch L. × marschlinsii. In vast areas, larches are the basic forest trees. Larch wood (from different species has similar properties) is a valued raw material with a long tradition of use - it is heavy, hard, but easily cleavable. After drying, it is easy to work with, it is also easy to roll and polish. It is as durable as oak. In contact with water, it petrifies. Since antiquity, it has been considered ideal for the construction of bridges, water structures, strengthening wetlands, it was used in the construction of various buildings, boats and ships, furniture, chests and barrels, railway sleepers, mines, telegraph poles, musical instruments, paneling, fences and gates . Venetian turpentine was produced from European larch resins, the bark was used for tanning leather. Due to the qualities of wood, as well as low requirements and fast growth, these trees are popularly cultivated. They also grow well in polluted and urban areas, they can be trimmed and formed into hedges.

All larch species occur in the temperate and polar zones of the northern hemisphere. The center of diversity is North-East Asia, where the Siberian, Dahurian and Japanese larch grow (the differentiation and hybrid formation within the local larches is the reason for distinguishing a number of taxa of various rank, including a larger number of species - even 9 only in the Russian Far East) . Larix mastersiana is limited to the Sichuan Province of China. Chinese larch has a wider range in China, and Griffith's larch is limited to the Himalayas. Siberian larch extends from Asian species to northeastern Europe. Apart from it, only European larch (not counting introduced species) is present on the European continent. Three species grow in North America, with Lyalla larch and Western larch having ranges limited to mountainous areas in the western part of the continent, and American larch having a wide range in the northern part.

Slice Trees ranging from approx. 10-15 m (Griffith's larch) to 70-80 m (Western larch), with a dbh up to 3 m. The crown is loose, pyramidal (from very narrow in the American larch to very wide in the Japanese larch) none with branches growing in irregular whorls or whorls. The branches extend horizontally while the side branches usually hang down. Two kinds of shoots - long shoots, with leaves only in the first year, and short shoots developing on two-year-old and older shoots in the leaf axils. Long shoots are grooved but smooth (needle marks are small and flat). The color of shoots, hair, and the presence of a wax bloom varies in different species and is of great taxonomic importance. The bark begins to peel quickly, usually in the form of a shield, with age the bark becomes thick and deeply fissured (it remains quite thin only in American and Western larch). Leaves Seasonal (only evergreen on annual seedlings) - chap