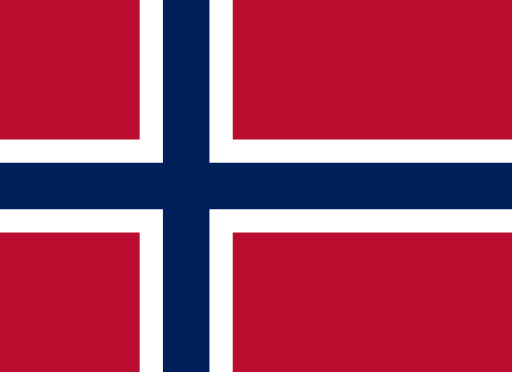 {{Infobox country}} Unknown fields: "density_place", "language_used", "p1_flag" and "p1". Norway (bokmål Norge or Nynorsk Noreg), officially the Kingdom of Norway - a state in Northern Europe that is a constitutional monarchy, the territory of which includes the western and northern part of the Scandinavian Peninsula, Jan Mayen, Svalbard, Bouvet Island and Lofoten. It has a total area of ​​385 207 km² and has 5 367 580 inhabitants (2015). It borders with Sweden almost along the entire length of the border; much shorter sections separate Norway from Finland and Russia. The country also has a sea border (via the Skagerrak strait) with Denmark. The capital of Norway is Oslo. Long, over 20 thousand. kilometers, the coastline is known for its characteristic bays, the so-called fjords. The name of the country comes from the Old Norse nord vegen (Polish road to the north).

Norway is the second (after Iceland) most sparsely populated European country. The average population density is about 14 inhabitants per 1 km². The population is concentrated mainly in the southern part of the country, in the Oslofjord region and on the coasts. 3.3 million people live in cities (73% of the population, data from 2001). The largest agglomeration is Oslo. The average population density of the agglomeration is 3787 people per km². Other major cities in Norway are Bergen, Stavanger, Trondheim, Tromsø, Drammen, Fredrikstad, Molde, Lillestrøm, Kristiansand, Narvik.

Southern and central Norway is located in the maritime temperate zone, and the north (beyond the Arctic Circle) in the temperate maritime zone, bordering the subpolar on the northern shores. In some parts of the country, snow remains all year round and the temperature in winter reaches -40 ° C, although there are even more severe frosts.

The oldest traces of human activity in Norway were found near Koms in the Finnmark district and near Fosna in Nordmøre. This find is dated back to 9000 BC. - 8,000 BC In 793, the Viking Age began with an attack on the English monastery of Lindisfarne. From this year on, Scandinavian invaders on long boats were often seen in the ports of North-Western Europe. The Norwegian Vikings reached Iceland, Ireland (they founded the city of Dublin there), Greenland, and America. In the early Middle Ages, the country was divided among the local rulers. One of the first to try to unite was Harald Pięknowłosy (Norwegian Harald Hårfagre). It was in 872, after the Battle of Harsfjorden, that he founded the first royal seat in Norway - Avaldsnes. The first church was built in Norway in Moster in 995, thanks to King Olaf Tryggvason. The battle of Stiklestad, where the ruler of Norway, Olaf Haraldsson, later recognized as a saint, is considered a symbolic moment of the country's Christianization. The 13th century is the time of Norway's glory: under Håkon IV, Norwegian territory also included Jämtland, Iceland, Faroe Islands, Orkney Islands, Shetland and Greenland. In the 14th century, the country was weakened by the growing influence of the Hanseatic League, the Black Death epidemic in 1349 and the struggle for the throne. After the death of Håkon VI in 1380, his son Olaf IV took the throne, and then the wife of the late king, Margaret I, who was also queen of Denmark and later of Sweden. In 1397, Norway, Sweden and Denmark entered into a union known as the Kalmar union. Sweden broke out of the union in 1523. Norway, increasingly dependent on Denmark, remained in the union until 1814. It was then that the winners in the Napoleonic Wars signed the Treaty of Kiel, under which Norway was to become part of Sweden, as compensation for the latter for the loss of Finland for Russia. Adopted May 17, 1814 (in Eid