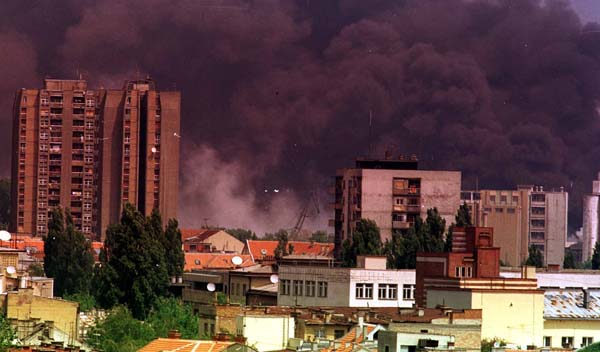 Operation Allied Force - carried out by the forces of the North Atlantic Alliance (NATO) between March 24 and June 20, 1999, an air operation in the Federal Republic of Yugoslavia, aimed at ending ethnic cleansing in Kosovo and restoring the multi-ethnic character of the province and forcing the process of democratization in Yugoslavia. In view of the ineffectiveness of the previously undertaken diplomatic actions, the North Atlantic Alliance decided to carry out a military operation, which was called "the first war for human rights in history". It has sparked doctrinal and public disputes about this intervention, especially its legal bases. For the first time in history, the North Atlantic Alliance has conducted a military operation without the authorization of the United Nations. NATO's intervention, however, deepened the humanitarian catastrophe that had already taken place before it began, and so - regardless of the "Allied Force" - the United States, and then the entire Alliance, undertook a second operation - aimed at delivering humanitarian aid, called "Allied Harbor". The allied operation Allied Force was another expression - after the operations over Bosnia and Herzegovina in 1992–1995 - of the progressive transformation of the North Atlantic Alliance, which was transformed from a strictly defensive organization into one capable of operating outside the territory of the member states, on the periphery of Europe, capable of carrying out long-term operations there operations to stabilize crisis situations.

Historical background of the conflict

Kosovo, in the opinion of most historians, is the cradle of Serbian culture and statehood. The Kosovar city of Prizren was the capital of the strongest Serbian state during the reign of Stefan Urosh IV Dusan. On June 15, 1389, a battle took place in Kosovo, in which the 15,000-strong army of Prince Lazar's Serbs was defeated in the fight against the 30,000-strong army of Sultan Murad I. The defeat of the Serbs opened the way for the Ottoman Empire to conquer the Balkans and resulted in the loss of independence by Serbia, and its incorporation into the empire in 1459. It was then that the process of Islamization began, which was a source of tensions and antagonisms between Christians, mainly Serbs, and Muslims, who became Albanians. During the Austro-Turkish war, at the end of the 17th century, Austrian troops entered the Serb-inhabited territories, and the Serbs took part in the battles against the Turks. However, after the defeat at the Battle of Kačanik in 1690, the Austrian army withdrew from Serbia, and about 300,000 Serbs took refuge from Turkish revenge in today's Vojvodina in what was then Austria. Taking advantage of this escape, the Turks settled in abandoned territories professing Albanians. During the First Balkan War (1912–1913), Serbia, along with Montenegro and Greece, occupied Albania. In 1913, when the Albanian state was reborn, as a result of pressure from Russia, most of Kosovo was incorporated into Serbia, and part of it - Metohia - to the Kingdom of Montenegro. By the decision of the Entente, in 1918 all of Kosovo became part of the newly created Kingdom of Serbs, Croats and Slovenes, which in 1929 took the name of the Kingdom of Yugoslavia. In royal Yugoslavia, the situation of the Albanian people was bad. Albanians were considered to be urbanized Muslim Serbs; they had no national rights, there were no Albanian schools, and no Albanian magazines. During World War II, Kosovo was occupied by Italy and formally incorporated into Greater Albania. During the occupation, education, administration and military police were seized by the Albanians, and the brutal persecution of Serbs began. Constant