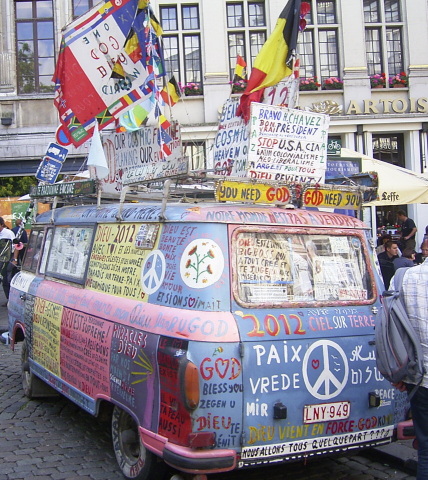 The hippie movement, whose members were called hippies, hippies, hippies, children of flowers or children of LSD (hippie, -s; to be hip - live up to date, today) - a counter-culture of the second half of the 1960s and early 1970s. Of the twentieth century. It was a revolution proclaiming a revolt of young people against the world of adults (do not believe anyone in their thirties) and its institutions: family, church, school, workplace, bosses, competition, money, army, war, norms, constraints, prohibitions (it is forbidden to prohibit), hypocrisy, dress conventions, private property (living in communes). A manifestation of a counterculture that rejects social norms based on consumption, competition and materialism. The institutions and structures they opposed were labeled by the hippies as the establishment. Despite the emphasis of this movement on combating the applicable dress conventions, he also created a specific fashion genre. Thanks to the dissemination by newly established TV programs devoted exclusively to specific youth music, the phenomenon spread to almost the entire Western world. Apart from a group of professed followers of the hippie ideology, this movement has become a kind of fashion among young people who took over only music and external attributes from hippies. The hippie movement was considered proof of the success of the market economy and welfare society. All previous utopias, such as the idea of ​​phalansters, had to deal with the sources of income themselves. Here it turned out that society is able to support people who do not want to work because they prefer to live their own way. The consequences of the existence of this movement were the expansion of pacifist movements and ecological ideologies, interest in the spirituality of the East, criticism of the so-called the rat race, conformism and all consumerism. This movement contributed to the spread of psychoactive substances, in particular marijuana. He was one of the links contributing to the so-called the sexual revolution. He was also one of the indirect sources of the New Age movement.

The hippies translated the ideas of the beatnik generation, and especially the work of Allen Ginsberg and Michael McClure, into a social movement consolidated by speaking against a common enemy of the Vietnam War. The beginning of the hippie movement is considered to be January 14, 1967, during The World's First Human Be-in in San Francisco, where Harvard-expelled psychology lecturer and LSD eulogist Timothy Leary, speaking to young people, announced the end of American idols. : money and work, and the beginning of the era of love and a new religion, which is a modified Zen Buddhism. To this he added a new sacrament, as LSD was called; only the combination of these two elements, according to him, allowed to achieve full enlightenment of the mind. Slogans were announced that became a symbol of the movement: Make love not war, All people are one and Drop out. Apart from Timothy Leary, the speakers included Richard Alpert, Alan Watts - a researcher of eastern religions, especially Zen, and Allen Ginsberg - they all wore white Hindu robes and had the eye of Providence on their foreheads. Among the crowd listening to them, "Santa Claus" circled, distributing LSD and marijuana. A relentless hippie carnival began in the Haight-Ashbury district. The summer of 1967 was called the summer of love, then dozens of new music bands appeared, playing in the spirit of psychedelia. This year's Monterey Pop music festival was a particularly important event. Some believe that the end of the hippie movement was heralded by The Altamont Speedway Free Festival on December 6, 1969. The festival was organized by musicians from the Jefferson Airplane group. Members of the Hells Angels motorcycle gang were hired as bodyguards. During