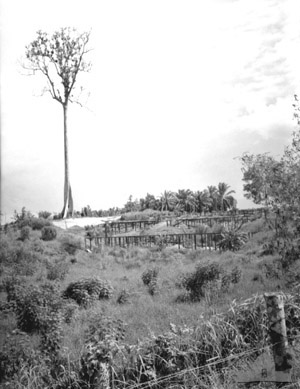 Sandakan Death Marches - forced evacuation of allied prisoners of war imprisoned in a POW camp in Sandakan in North Borneo, carried out by the Imperial Japanese Army in 1945, in the last phase of the Pacific War, ended with the extermination of over 99% of prisoners. In January 1945, due to the fear of an Allied invasion and the destruction of the airport where prisoners were working, the command of the Japanese 37th Army decided to transfer them to the west coast of the protectorate. Due to the fact that the Allies ruled at sea and in the air, the evacuation was carried out by land. The first group of prisoners left Sandakan on January 28, the second - on May 29, and the third - on June 15. The march through the swamps and the mountains covered with dense forest turned into a "death march", during which Australians and British were killed en masse due to exhaustion or at the hands of the guards. Eventually, instead of the 400 km distant destination - Tuaran, the POWs reached only Ranau on the 250th kilometer of the route. Those unable to walk were left in Sandakan, where they all died of starvation and disease, or were killed by the guards. Almost all the POWs who made it to Ranau also died or were murdered. Of the 2,434 Australians and Brits imprisoned in Sandakan, only six survived. They were only Australians, and they were all refugees. It is widely believed that the "Sandakan Death Marches" were the greatest single crime suffered by Australian soldiers during World War II. The findings of the Australian researcher Lynette Ramsay Silver show that a significant number of prisoners imprisoned in Sandakan could have survived if the planned action of their release - operation "Kingfisher" had been carried out. However, due to delays and errors committed by the command of the Australian Services Reconnaissance Department, mainly due to poor recognition, it was to be canceled. After the war, for fear of a scandal, the Australian command was supposed to deliberately conceal these facts, maintaining that the operation was unfeasible and never left the stage of consideration. At the same time, the responsibility for leaving the captives at the mercy of the Japanese was falsely blamed on the American general Douglas MacArthur. Some Australian authors, including Paul Ham, do not agree with Silver's theses.

During the war in the Pacific near Sandakan, the capital of the British protectorate of North Borneo, there was a POW camp organized by the Imperial Japanese Army for captured Allied soldiers. The first POW contingent, known as Force B, was imprisoned in the camp on July 19, 1942. It included 1,494 Australians - soldiers of the 8th Infantry Division, who had been captured in Singapore five months earlier. In April 1943, two new groups of prisoners of war were brought to Sandakan. The first included 776 soldiers. Almost all - with the exception of six Australians and one South African - were British, Royal Air Force and Royal Artillery soldiers who were taken prisoner in Java and later detained at the Changi POW camp in Singapore. The second group, known as Force E, comprised 503 prisoners. As in the case of Force B, they were Australians, the vast majority of whom were taken prisoner during the Battle of Singapore. The prisoners of war were placed in Sandakan to work on the construction of a Japanese military airport. At first, the living conditions, food and treatment were relatively bearable. Soon, however, the situation in the camp started to worsen. By the end of 1942, the incidence of dysentery, malaria, beriberi, and ringworm had increased. Many prisoners also suffered