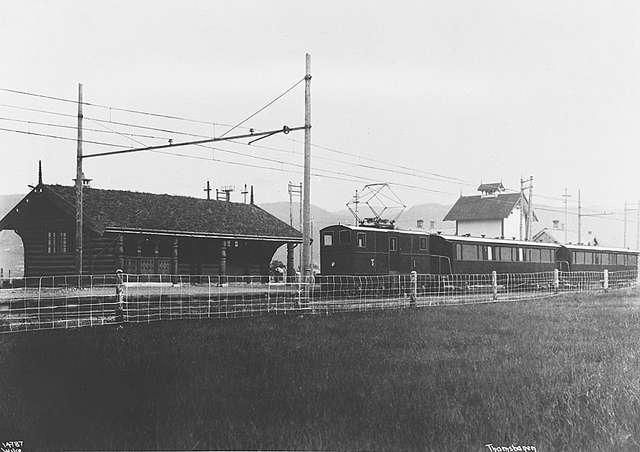 Thamshavnbanen - a narrow gauge electrified railway in Norway in the district of Trøndelag, in the municipalities of Orkland and Meldal. It was established in 1908 to transport ores from the Løkken Verk mine to the smelter and port of Thamshamn. Currently operated as a museum line. Thamshavnbanen was the first electrified railway in Norway and is also the oldest active AC powered railway line. It is also the only line in Norway with a track gauge of 1000 mm.

The idea to build the railway line came from the Norwegian entrepreneur Christian Thams, who owned the copper and zinc mine in Løkken Verk. He replaced manual water pumps with electric ones. For this purpose, it was necessary to bring electricity to the mine, which in turn made it possible to build an electrified railway line. Work began in 1906, and in 1908 the section between Orkanger and Svorkmo was put into operation. The King of Norway, Haakon VII, participated in the opening of the line. In 1910 the missing section from Svorkmo to Løkken was put into operation. It was then that the line was inaugurated again, chaired by Prime Minister Wollert Konow. From the very beginning, the line was a hybrid and transported passengers in addition to ores. During World War II, the line was operated by the German occupiers. For this reason, the Norwegian resistance movement (Ling's Company to be exact) carried out four sabotage actions on it. These actions were aimed mainly at the rolling stock, which was difficult to replace due to the unusual spacing. As a result, the Germans rebuilt the line into a standard gauge, adding a third rail. Rebuilding was completed in May 1945, so the additional rail was never used and was removed shortly after the war. In 1963, passenger traffic on the line was stopped. In 1974, the transport of ore from the mine was also stopped. It has operated as a museum line since 1983, initially only on the Løkken - Svorkmo section. In 1986 it was extended to Solbusøy, 1990 to Fannrem and in 2001 to Bårdshaug, which is now the northern end of the line. In 1993, the section between Orkanger and Thamshamn was pulled down.

Thamshavnbanen is a line with a track spacing of 1000 mm. It is powered by an alternating current of 6600 V, 25 Hz. The full length of the line was 25.2 km with a height difference of 160.7 m. The currently operated section is 22 km long. The top speed was originally 60 km / h. The line runs along the Orkli valley. In Svorkmo it was necessary to change the course of its tributary, Svorki, to lead the line. Between Svorkmo and Thamshamn, embankments and other structures are prepared for the normal gauge of the rails. Initially, it was planned to build a section of the Dovrebanen line here. Ultimately, however, the Storting decided to draw this line through the valleys of the Sokna and Gaula rivers.

Initially, there were eight stations and railroad stops on Thamshavnbanen. Currently, four of them are in operation for the needs of the museum line.