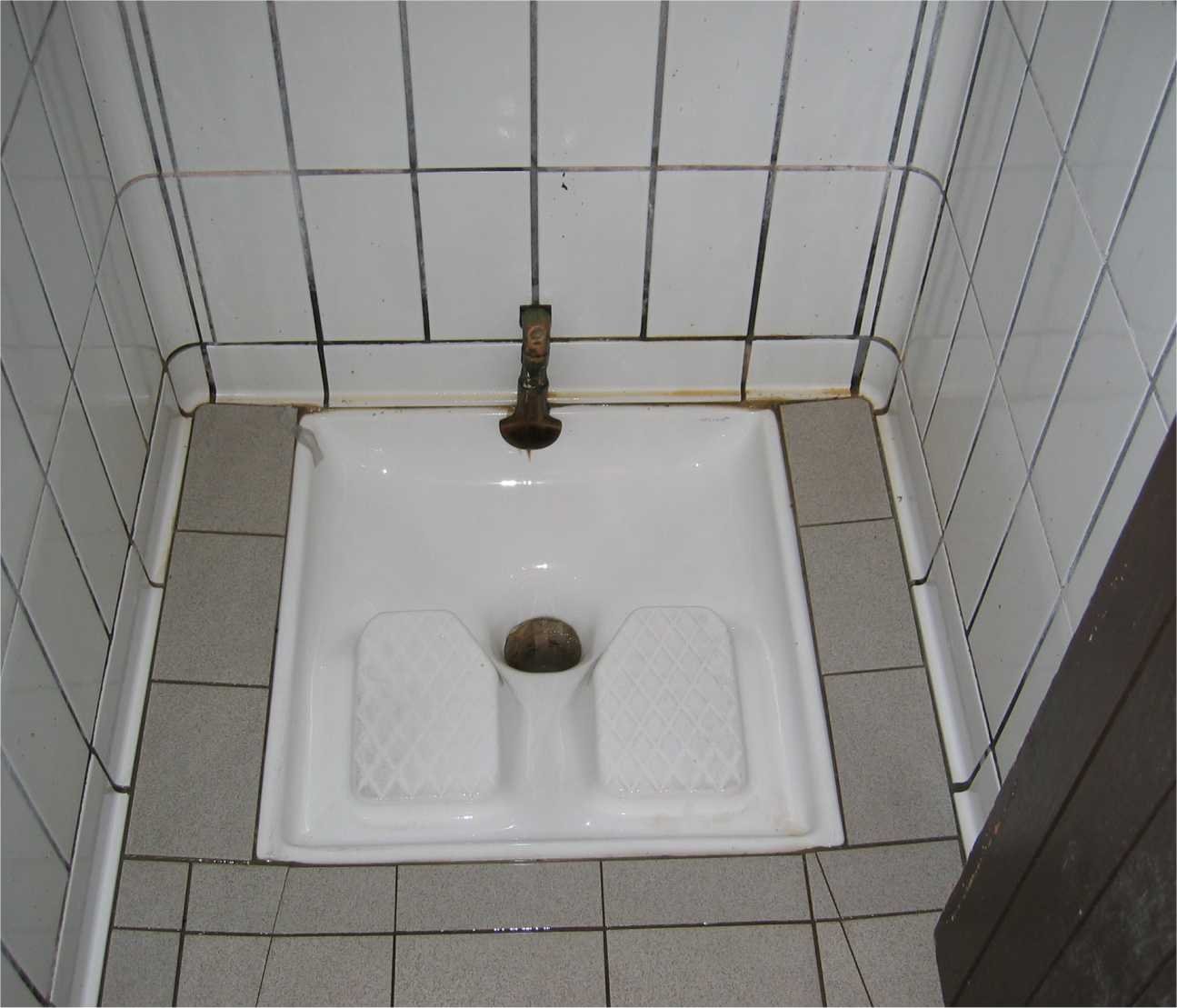 Squat toilet, ski toilet (real Turkish toilet, Arabic toilet) - a type of sanitary device used for defecation in a squatting position. The main part of this type of toilet is built of an oval bowl assembled at the level of the floor, ending in the lower part with a drain with a diameter of 75 to 100 mm. On both sides of the bowl there are (but not always) bases for the feet. Some models have the option of flushing with the help of special flushing valves. They are usually made of ceramics or stainless steel. Unlike other types of passages, they do not have their own siphon.

There are several types of these installations.

The user puts his feet on special supports (formed protrusions of the basin). He crouches to face the exit. It is most widespread in Turkey and can sometimes be found in public buildings such as motels on highways in France, Italy and all former Soviet republics. It is also widely used in India where it is referred to as the Indian Water Closet or IWC for short to distinguish it from the traditional European style EWC (or Western Latin / Roman). It can also be found in the Middle East or in rural areas of Greece, Bulgaria, Romania, Italy or Portugal, China and most of Southeast Asia.

This toilet has a slightly different shape - it crouches on the floor and the installation fits between the legs (it is narrower). The person squats facing the flush. This type of toilet can be a big surprise for people from the cultural circle, where it is not common, and where sit-down toilets in the form of a toilet bowl with a toilet are used. It can also be difficult for them to use, especially in means of transport such as train or ship. The British used to scornfully refer to them as "stand & deliver" toilets. In connection with the raised argument for the health aspect of defecation in a squat position, special adapters have been developed, stands attached to a traditional toilet bowl, allowing you to enjoy the benefits of this attitude of using the toilet.

"Squat mode" is considered healthier and has a preventive effect against diseases of the large intestine (cancer, hemorrhoids, colitis), as it allows for full bowel movements without plaque, and protects against damage associated with prostate diseases (nerve irritation). It has been suggested that squatting strengthens the pelvic muscles in women, reducing the likelihood of incontinence. Regularly assuming and maintaining a squat position can also help keep your knees flexible. Additionally, it has been suggested that the use of this type of toilet strengthens the hips and improves breathing and concentration. The squat position is the primary defecation position for humans. Such a toilet is cheaper than traditional toilet bowls. Toilets of this type are easier to clean and generally maintain hygiene, they are less prone to acts of vandalism. They force a reduction in residence time (the squat position does not allow for comfortable reading, e.g. of newspapers). They are especially practical in public places, as there is no contact between bare skin and potentially dirty surfaces (as in the case of traditional toilet seats), which reduces the risk of possible transmission of microorganisms. Scientific research has shown that seat toilets are not a greater health risk than squat toilets. In fact, infections in toilets occur mainly in direct contact with the secretions of previous toilet users and with the forming aerosol