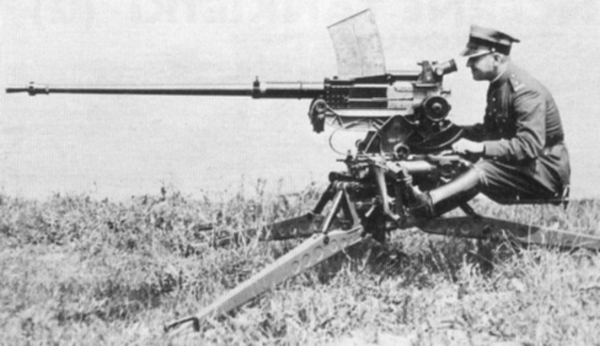 Large-caliber machine gun (WKM, Wukaem) - machine gun caliber 12–20 (inclusive) mm. In the Second Polish Republic, the name of the heaviest machine gun (nkm) was used. After the war, the current name was introduced under the influence of the Russian language. The most common wkm caliber is 12.7 mm (0.50 inch), there are also 13.2 mm, 14.5 mm, 15 mm, 20 mm. Currently, the latter caliber is classified as a cannon.

The beginning of large-caliber machine guns was given by French attempts to construct weapons capable of fighting enemy airships during the First World War. For this purpose, they adapted a cartridge from the Grass Mle 1874 11mm rifle. The first wukaemami were the Hotchkiss Mle 14 and Vickers wz. 09. Wukaemy then developed as aircraft and vehicle on-board weapons and anti-aircraft weapons. The most popular designs of large-caliber machine guns are the Browning M2 and M2HB (USA) called "fifty" and DSzK (USSR) - both 12.7 mm caliber, used during World War II and now. Various M2HB variants are still in use, DSzKM is still in use but has the successor of the NSW KG. The most powerful popular rifle is Krupnokalibiernyj Puliemjot of Vladimirov of Soviet origin.