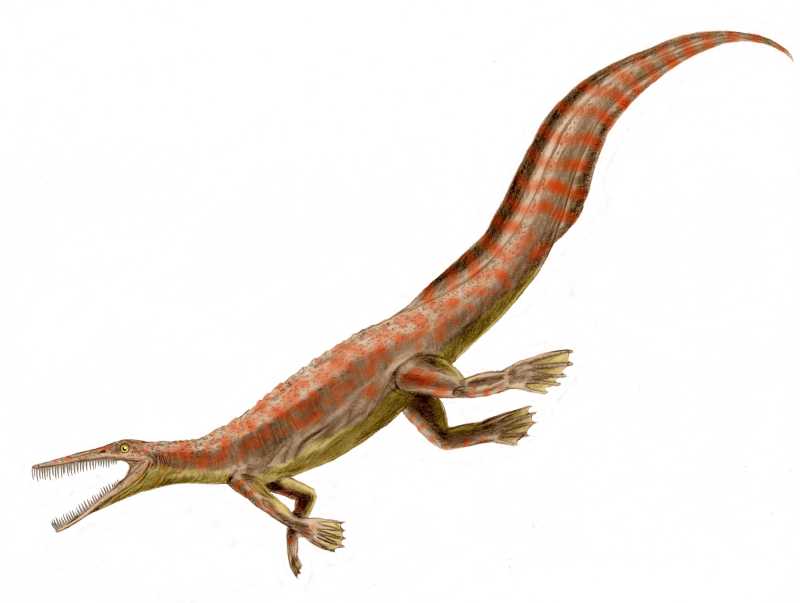 Sauropsida (Sauropsida) - one of the two main clades of amniotes (next to synapsids), which split into two main evolutionary lines: anapsids, characterized by a skull devoid of temporal openings, and diapsids, in which the skull developed two pairs of temporal openings (two each - upper and lower - behind each eye), through which the strong muscles of the jaws are threaded. The term "sauropsy" was coined by Thomas Henry Huxley in the 1860s; stated that the clusters of birds (Aves) and reptiles (Reptilia) are more closely related to each other than to any other class of vertebrates, and that both clusters together form one of the three main groups into which vertebrates (along with mammals and the Ichthyopsida group, to which Huxley included fish and amphibians, now recognized as paraphyletic). Huxley originally referred to the group of birds and reptiles only with the English term Sauroids, but later gave it the Latin name "Sauropsida". Edwin Stephen Goodrich in 1916 noted that the traditionally understood group of reptiles is paraphyletic, as it includes both amniotes closely related to birds and closely related to mammals. He therefore proposed that the name Sauropsida be used only for birds and all amniotes more closely related to them than to mammals; The sauropsids were to be a sister group to the Theropsida group (synonymous with synapsids), which included mammals and all amniotes more closely related to them than to birds. According to Goodrich, the sauropsids and theropsids evolved from what he called Protosauria, which included the oldest reptiles and some of the more primitive Paleozoic tetrapods. Other scientists, such as David Watson, defined sauropsids and theropsides differently, including the primitive reptiles in these two groups, which Goodrich classified as "protosaurs," and on the other hand excluding birds and mammals, respectively. Jacques Gauthier (1994) defined Sauropsid as a clade of reptiles (sensu Gauthier, Kluge and Rowe, 1988; see below) and all amniotes more closely related to them than to mammals; on the other hand, Michel Laurin and Robert Reisz (1995) defined Sauropsid as a clade that included the last common ancestor of Mesosaurs, Turtles and Diapsids, and all of its descendants. All reptiles living today belong to the sauropsids; most authors also include birds among them. This corresponds to the historical understanding of the term Sauropsida; moreover, it is clear that birds must be part of sauropsides if they are to be monophyletic (like mammals, they are part of monophyletic synapsids). However, prof. Michael Benton, in an attempt to reconcile the traditional Linnaean classification of vertebrates with the newer, based on the principles of cladistics, proposed in the third edition of Vertebrate Paleontology not to include birds and mammals in sauropsids and synapsids, so that birds and mammals could retain the status of separate clusters. Instead, Benton proposed that the elevated sauropsids and synapsids replace the traditional reptile cluster. In the fourth edition of Vertebrate Paleontology, Benton distinguished the reptile cluster (Reptilia) in place of the sauropsid cluster, while keeping the synapsids as a separate cluster from reptiles. Some authors have attempted to redefine reptiles so that they become a monophyletic group; in connection with these attempts, the relationship between reptiles and sauropsids has become uncertain. Gauthier, Kluge, and Rowe (1988) defined Reptilia as a clade comprising the last common ancestor of living turtles and members of the Sauria clade (ie the crown group of diapsids to which the Lepidosauromorph and Archosauromorph clades belong) and all of its descendants; in turn, Laurin and Reisz (1995) defined Reptilia as a clade encompassing the last common ancestor