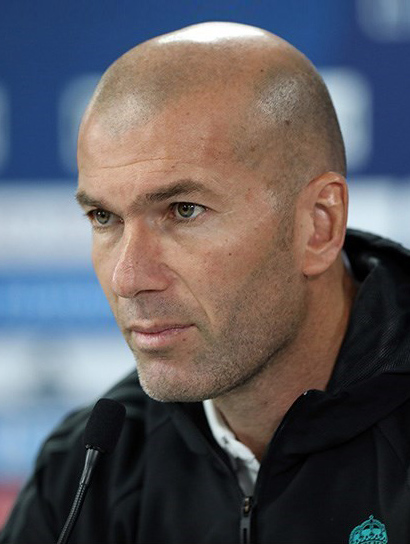 Zinédine Yazid Zidane (born June 23, 1972 in Marseilles) - French footballer of Algerian origin, he played as a midfielder, after the end of his career as a football coach. During his career as a football player, he was nicknamed "Zizou". 108 times representative of his country, with whom he won the 1998 World Championship and the 2000 European Championship. Winner of the Golden Ball in 1998, the best player in the 2006 World Cup, where he reached the finals as the captain of the national team. A player of AS Cannes, Girondins Bordeaux, Juventus and Real Madrid, with whom he won the Champions League in 2002. Three times elected FIFA Footballer of the Year, once elected the best player in Europe. In 2004, Brazilian Pelé placed him on the list of the 100 best living footballers in the world. Zidane's football career ended in 2006 after the World Cup.

Beginnings of career and stay in AS Cannes

Zinédine Zidane already in 1982 joined the junior school of the US Saint-Henri club, whose stadium was located in one of the districts of Marseille - La Castellane. Then the young Frenchman trained in the junior teams SO Septèmes-les-Vallons. At fourteen he left Septèmes-les-Vallons to be recruited into the junior league. It was then that he caught the attention of AS Cannes scout Jean Varraud. Zidane made his adult debut as a 16-year-old on May 20, 1989, and scored his first goal for AS Cannes on February 8, 1991. As a reward for this goal, the French player received a car from the president of the club. In his debut season in the team from Cannes, Zidane played two league games, but in the next competitions he did not appear on the pitch even once. The 1990/1991 season, however, already started as the main player of Boro Primorac's charges and played in 28 Ligue 1 matches. In the following season, he made 31 appearances and scored five goals, thanks to which he became one of the team's best scorers.

In the summer of 1992, Zidane became a footballer for the Girondins Bordeaux. From the very beginning of his stay in the "Girondins" team, the French midfielder was the main player of the team. He ended his first season in the new club with 35 appearances and 10 goals in the league. Together with Bordeaux Zidane, he won the Intertoto Cup in 1995 and reached the UEFA Cup final in 1996. During four years of playing for this club, the Frenchman in the midfield had the opportunity to play alongside players such as Bixente Lizarazu, Christophe Dugarry, Richard Witschge and Philippe Vercruysse. In 1995, Kenny Dalglish, the Blackburn Rovers coach, expressed the desire to recruit Zidane and Dugarry. Team owner Jack Walker commented, saying "why buy Zidane when we have Tim Sherwood in the squad?"

In May 1996, Zidane signed a four-year contract with Champions League winner Juventus for £ 3 million. In the team led by Marcello Lippi, he played as a quarterback. He contributed to the "Old Lady" winning the Italian championship and the Intercontinental Cup, in which Juventus defeated CA River Plate 1-0. During the 1996/1997 season, the Italian club also reached the Champions League final, but then lost 3-1 to Borussia Dortmund. Zidane ended his first year in Turin with 29 games and five Serie A goals. By scoring seven goals in 32 Italian league games, Zidane helped Juventus defend the country title. He played thirteen times in the Champions League and scored five goals, but the "Old Lady" lost to Real Madrid 1-0 in the final match of this competition. Juventus finished sixth in the 1998/1999 league, then won the country's runner-up twice in a row. In 1999, the winner