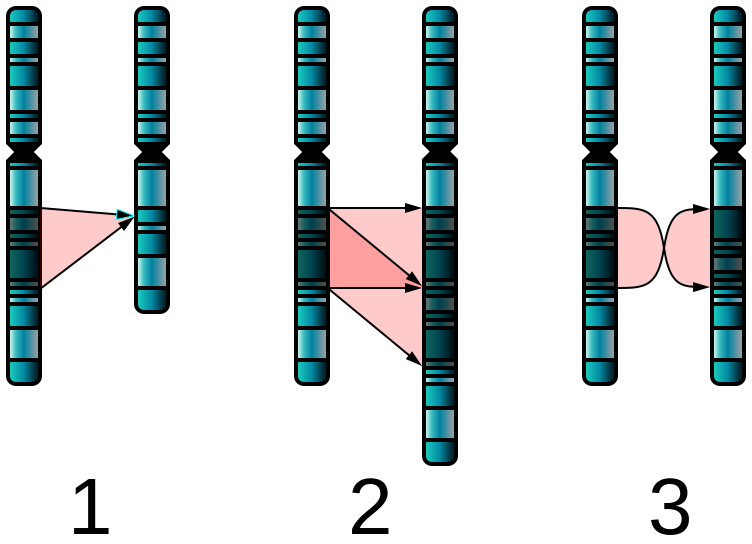 The defective functioning that of chromosomal segregation that can cause chromosomal anomaly (Brazilian Portuguese) or chromosomal anomaly (European Portuguese) or partial chromosomal dysplasia (Brazilian Portuguese) or partial chromosomal dysplasia (European Portuguese), a malformation that can result in serious deficiencies. Some examples of deficiencies caused by chromosomal abnormalities in man are: Cri-du-Chat syndrome, which is caused by the deletion of part of the short arm of chromosome 5. Victims make high-pitched sounds that resemble a cat's meow. They have eyes wide apart, head and jaw small and mentally retarded. Wolf-Hirschhorn syndrome, which is caused by partial deletion of the long arm of chromosome 4. 1p36 deletion syndrome, which may be caused by partial deletion of the short arm of chromosome 1. Sex chromosome abnormalities occur due to atypical meiosis during the anomalous process of gametogenesis, ie, gamete production (sperm and egg), with altered haploid genomic quantity. Specifically during the separation of homologous chromosomes (anaphase I), or also related to the segregation of sister chromatids (anaphase II), without disjunction of sex chromosomes XX or XY. Upon fertilization, the genetic contribution of these cells causes the appearance of individuals with abnormal karyotype in terms of the constant number of chromosomes of the species, emerging organisms with a chromosome set greater than 46 chromatin filaments contained within the somatic cell karyotheque (diploid). Such genetic conformity evidences the state characterized by organisms with female and male appearance, respectively named from the genotype by: Superfemale and Supermale. The likely karyotypes of individuals with sex chromosome abnormalities can be represented as follows: - Three possible variations for a female organism: 47, XXX; 48, XXXX; 49,XXXXX (the last two are usually rare events). - And a single variation in the male organism: 47, XYY. In women, the frequency is relatively high, reaching 1 case in approximately 700 births. In men, this frequency can reach 01 case in 1,000 births. The main features manifested are: - Motor and speech disorders; - High hormone level; - Reduced brain volume; - Low IQ; - Abnormally sized ears, hands and feet.