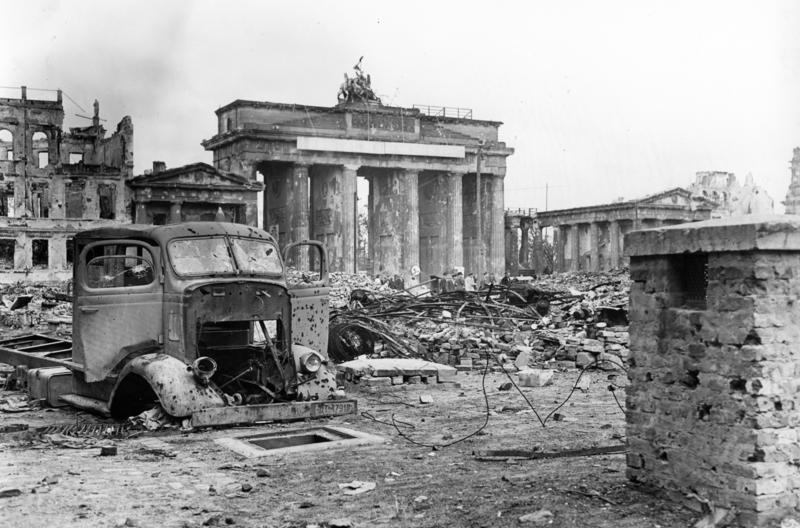 The bombing or bombing of Berlin was a series of military bombings carried out against the capital of Nazi Germany during World War II. Berlin was the target of 363 air raids between 1940 and 1945 by the RAF Bomber Command, the USAAF Eighth Air Force, the French Air Force and the Soviet Air Force as part of Germany's Allied strategic bombing campaign. British bombers dropped 45,517 tons of bombs, while US planes dropped 23,000 tons. As the bombing continued, more and more people fled the city. By May 1945, 1.7 million people (40% of the population) had left Berlin.

With the outbreak of World War II in 1939, the President of the United States, Franklin D. Roosevelt, made a request to the belligerent countries to limit their air attacks to military targets. The French and British agreed to comply with the request, on condition that it be "on the understanding that these same rules of war would be scrupulously observed by all". only against military targets and infrastructure buildings of direct military importance, such as ports and railways. Initially, the British government avoided the deliberate bombing of civilian property outside the combat zones. This policy was abandoned on 15 May 1940, two days after the German air raid on Rotterdam, when the RAF was given permission to attack civilian targets in the Ruhr, including oil plants and other industrial targets that were important to the German war effort. . The first RAF attack on Germany took place on the night of May 10-11, 1940, in Dortmund. The Jules Verne aircraft, a variant of the French Naval Aviation Farman F.220, was the first Allied bomber to attack Berlin. On the night of 7 June 1940, he dropped eight 250 kg and eighty 10 kg bombs on the German capital. Between 1939 and 1942, the policy of bombing only targets of direct military importance was gradually abandoned in favor of per zone". Thus, large-scale bombings of German cities began, with the aim of also destroying residential buildings and civil infrastructure constructions. While killing German civilians was never a deliberate aim, it was evident that bombing an entire region would inflict civilian casualties on a large scale. With the technology available at the time, precision bombing of military targets was only possible in daylight (which was already difficult). However, the daytime bombings led to high losses of British aircraft, so the preference was to make the attacks at night. The night attack, however, also presented many navigation difficulties and a high inaccuracy in the dropping of bombs.

Before 1941, Berlin (which is 950 kilometers from London) was at the limit reachable by the British bombers then available. In summer, the days were longer and the sky was clear increasing the risk for Allied bombers. At this time of year, the bombings were carried out only at night. The first RAF attack on Berlin took place on the night of 25 August 1940. In this action, 95 aircraft were sent to bomb Tempelhof Airport, near the center of Berlin. 81 of these planes managed to fulfill their objectives, dropping bombs in and around Berlin. Although the damage from this first attack was light, the psychological effect on Hitler was considerable. The bombings in Berlin led the Nazi dictator to order the Luftwaffe to stop attacking British airfields and air defenses and start bombing the cities of England. This change came at a time during the Battle of Britain in which the d