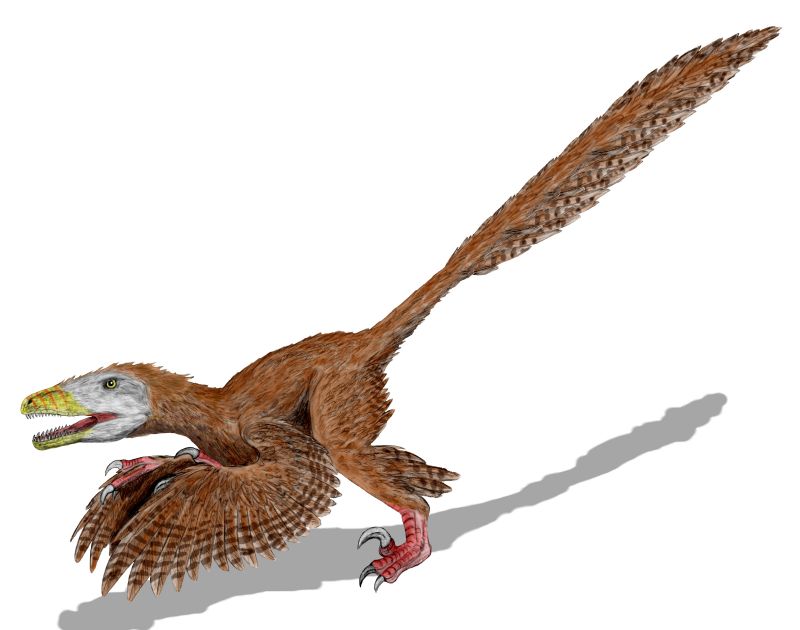 The realization that dinosaurs are closely related to birds raised the obvious possibility of the existence of feathered dinosaurs. Archeopteryx fossils have well-preserved feathers, but until the early 1990s, clearly non-avian dinosaur fossils were discovered with preserved feathers. Today there are more than twenty genera of dinosaurs with fossil feathers, almost all of which are theropods. Most are from the Yixian Formation of China. The fossil feathers of one specimen, Shuvuuia deserti, tested positive in immunological tests for beta-keratin, the main protein in bird feathers. In 2015, a 99-million-year-old dinosaur with feathers, bones and soft tissue was discovered in Myanmar.

Many non-avian dinosaurs are known to have had feathers. Direct evidence of feathers exists for the following genera, listed in the currently accepted order and by date of publication. In all of the examples, the evidence described consists of feather impressions, except those marked with an asterisk (*), which denotes genera known to have had the feathers based on skeletal or chemical evidence, such as the presence of "handles". feather". Avimimus* (1987) Sinosauropteryx (1996) Protarchaeopteryx (1997) Caudipteryx (1998) Rahonavis* (1998) Shuvuuia (1999) Sinornithosaurus (1999) Beipiaosaurus (1999) Microraptor (2000) Noming* (2000) Cryptovolans (2002) Scansoriopteryx (2002) Epidendrosaurus (2002) Psittacosaurus? (2002) Yixianosaurus (2003) Dilong (2004) Pedopenne (2005) Jinfengopteryx (2005) Juravenator? (2006) Sinocalliopteryx (2007) Velociraptor* (2007) Epidexipteryx (2008) Anchiornis (2009) Tianyulong? (2009)Note, filamentous structures in some dinosaurs of the Ornithischia group (Psittacosaurus, Tianyulong) and pterosaurs may or may not be homologous with theropod feathers and proto-feathers.