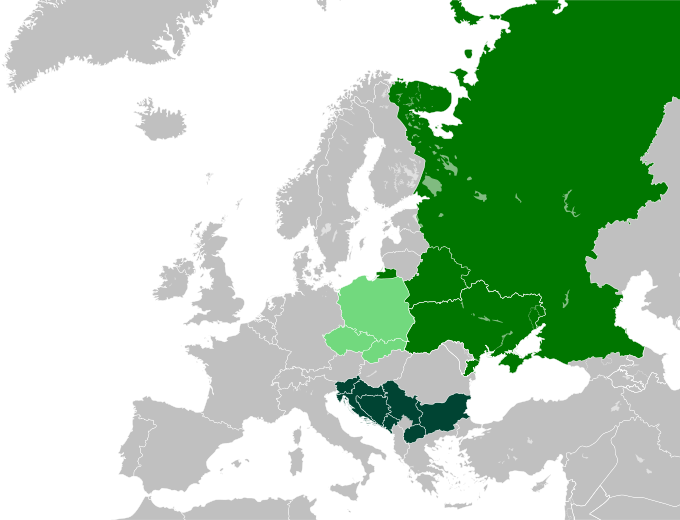 Slavs is the term used to refer to an ethnic and linguistic branch of Indo-European peoples who live mainly in Central and Eastern Europe. From the beginning of the sixth century they dispersed to inhabit most of central, eastern Europe and the Balkans. Later, many settled in Siberia and Central Asia or emigrated to other parts of the world. More than half of Europe's territory is inhabited by communities of Slavic language speakers. The modern nations and ethnic groups known by the ethnonym "Slavic" are considerably diverse genetically and culturally, and the links between these peoples are quite varied, from a sense of connection and affinity to feelings of mutual hostility. Slavic peoples are classified geographically and linguistically into West Slavs (which includes Czechs, Slovaks, Moravians, Poles, Silesians and Sorbians), East Slavs (which includes Belarusians, Russians, Ruthenians and Ukrainians) and Southern Slavs (which covers Bosniaks, Bulgarians, Croats, Macedonians, Montenegrins, Serbs and Slovenes). According to a 2007 genetic study based on the haplogroups of the human Y chromosome, the Slav male group divides into two main groups; one encompasses all West Slavs, East Slavs, and two male Southern Slavic populations (Western Croatians and Slovenians), while the other group encompasses all remaining South Slav males.

The Slavic autonym slověninъ is traditionally and most often observed as a derivation of Slavic "glory, fame" or slovo "word, talk". As such, it would originally denote "people who speak (the same language)", that is, peoples who understand each other, in contrast to the Slavic word for foreign peoples němci, which means "to grumble, one who murmurs" (from the Slavic němъ " mumble, mute"). This last word came to denote the Germanic peoples in many later Slavic languages, such as Polish Niemiec, Russian Nemeц, Serbo-Croatian n(ij)emac, etc. The English word Slav is derived from the medieval Latin sclavus, a loan from the ancient Greek σκλάβος (sklábos) "slave", which in turn was a loan from the Slavic autonym: Proto-Slavic slověninъ "Slavic". Excluding Ptolemy's ambiguous mention of the Slavonoi and Sabianoi tribes, the earliest Slavic references under this name date back to the sixth century. The word was written in different ways as Σκλάβήνοι Sklábēnoi, Σκλαύηνοι Sklaúenoi or Σκλάβίνοι Sklabinoi in ancient Greek and sclaueni, sclavi, sclauini or sthlaueni in Latin. The oldest documents written in ecclesiastical Slav and dating to the ninth century attest to Slovѣne Slověne to describe the Slavs. Other attestations include the Old East Slavic word Сlovene Slověně to describe "an East Slavic group near Novgorod", and Slavutich "the Dnieper river". Alternative suggestions proposed by some academics enjoy much less support. B. P. Lozonski argues that the Slavic word formerly had the meaning of worshiper, worshiper, in its context meaning "practitioner of a common Slavic religion", from which it evolved into an ethnonym. SB Bernstein speculates that it derives from the reconstructed Proto-European word *(s)lawos, cognate of the Ancient Greek λαός laós "population, people", which by itself generally does not accept etymology. However, Max Vasmer and others have suggested that the word originated as the name of a river, comparing it to Latin cognates such as cluere "clean, purify", a lexical root that is not known to have continued in Slavic, although it appears in other languages ​​with similar meanings.

ProtoSlavic, the ancestral language of all Slavic languages, branching off into an uncertain time and place from the protoindo-I