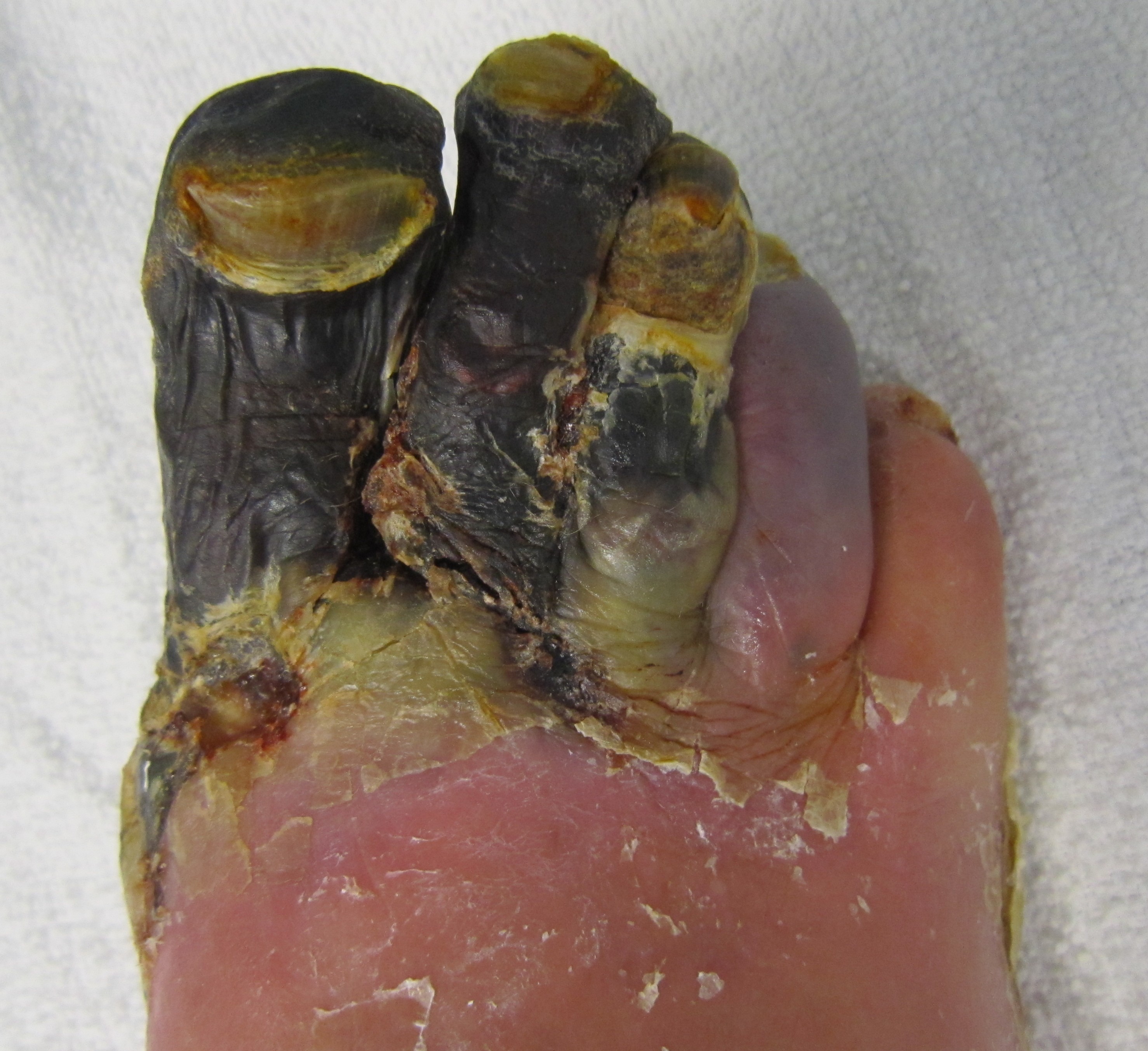 Gangrene is a type of tissue death caused by lack of blood supply. The most common symptoms are skin color change to red or black, tingling, swelling, pain, skin breakdown and cold body at the affected site. The most common affected areas are the feet and hands. Some types of gangrene may be associated with fever or sepsis. Risk factors include diabetes, peripheral arterial disease, smoking, severe physical trauma, alcoholism, HIV/AIDS, frostbite and Raynaud's syndrome. The condition can be classified into dry gangrene, wet gangrene, gas gangrene, internal gangrene and necrotizing fasciitis. Diagnosis of gangrene is based on symptoms and may be supplemented by imaging tests. Treatment consists of surgery to remove dead tissue, antibiotics to treat any infections, and measures to treat the underlying cause. Among the surgical procedures are debridement, amputation or larval therapy. Among the measures to treat the underlying cause are bypass surgery or angioplasty. In some cases hyperbaric oxygen therapy may be used. The frequency of gangrene is unknown.

Most cases occur after a severe physical trauma, such as a car accident, that results in enough blood loss to leave some part of the body without blood supply for several minutes. It can also occur as a complication of chronic illness, from burns caused by extreme temperature, after surgery, or from bacterial infection. The most common species of bacteria involved in gangrene are: Miscellaneous Clostridium Some Streptococcus Staphylococcus aureus Yersinia pestis Several other bacteria can also grow on wounds or any part of the body that has their circulation interfered or impeded, worsening gangrene.

Basically it can be divided into: Dry gangrene: These usually appear on the feet or hands and are caused by complications from diabetes mellitus or an autoimmune disease. It can become wet when infected with pathogenic bacteria. Wet gangrene: Almost always associated with bacterial infection with pus. It can be caused by an injury or burn. Gas gangrene: Severe, acute, painful condition in which the muscles and subcutaneous tissues fill with gas and a serous exudate; due to the fermentation of carbohydrates in the tissue producing gases (carbon dioxide and hydrogen) made by anaerobic bacteria. If bloodstream invasion occurs, there is a risk of death. Other types of classifications include: G. embolic - a condition that follows the interruption of the blood supply by means of an embolism. Symmetrical G. - from matching fingers on both sides due to vasomotor disturbances. G. ophidian - caused by snakebite, can lead to amputation. Fournier's G.: it happens due to Gram-negative bacillary or germinal contamination in the perineal region. When sepsis occurs it can be fatal.

Immediate cleaning of serious wounds, allowing blood circulation, and preventive treatment with antibiotics are the most effective steps in preventing gas gangrene.