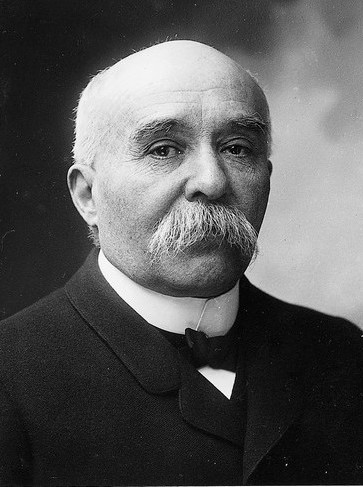 Georges Benjamin Clemenceau (Mouilleron-en-Pareds, 28 September 1841—Paris, 24 November 1929) was a French statesman, journalist, and physician. Graduated in medicine, a science that soon switched to political activities. At the age of 30 in 1871 Clemenceau was a member of the National Assembly, in which he spoke out vehemently against the peace treaty with the newly unified German Empire. His political stance was sometimes a little uncomfortable for some of his peers, as he defended the republican and anticlerical ideals of the extreme left. This irreverent politician was responsible for the fall of six governments and the resignation of the president of the republic, which earned him the title of "the tiger". Georges Clemenceau was the founder of the newspaper La Justice, a journal with a radical trend, which considerably increased its political influence. In 1897 he was responsible for the publication of L'Aurore, where the French writer Émile Zola released "J'accuse" in connection with the "Dreyfus Case". Between 1902 and 1920 Clemenceau was elected senator. He held the post of Prime Minister of France from 1906-1909 and 1917-1920. In the latter, he headed the country during World War I and was one of the main authors of the Paris peace conference, which resulted in the Treaty of Versailles, where he had two main objectives: The recovery of Alsace and Lorraine and the independence of the Rhineland. Only the first objective was completed, but the Rhineland demilitarized.

1870 - Mayor of Montmartre. 1876 ​​- elected to the Chamber of Deputies. 1902 - elected to the French senate. 1906 to 1909 - French Prime Minister. November 1917 - French Prime Minister again. He is also minister of war. He was the leader of the French delegation to the Paris Conference at the end of World War I, where the Treaty of Versailles was signed. He lost the 1920 election. He was succeeded by Alexandre Millerand.

"War making is far easier than making peace" "War is a series of disasters that result in a winner" "Managing silence is more difficult than managing words." "Just as there is a civil society founded on freedom, there is a military society founded on obedience, the judge of freedom cannot be the judge of obedience." "A man who is not a socialist at age 20 has no heart. A man who is still a socialist at age 40 has no head." "War! It is too serious a thing to be entrusted to the military." "If even God was content with the ten commandments, what is the reason you insist on fourteen, my dear Wilson?"