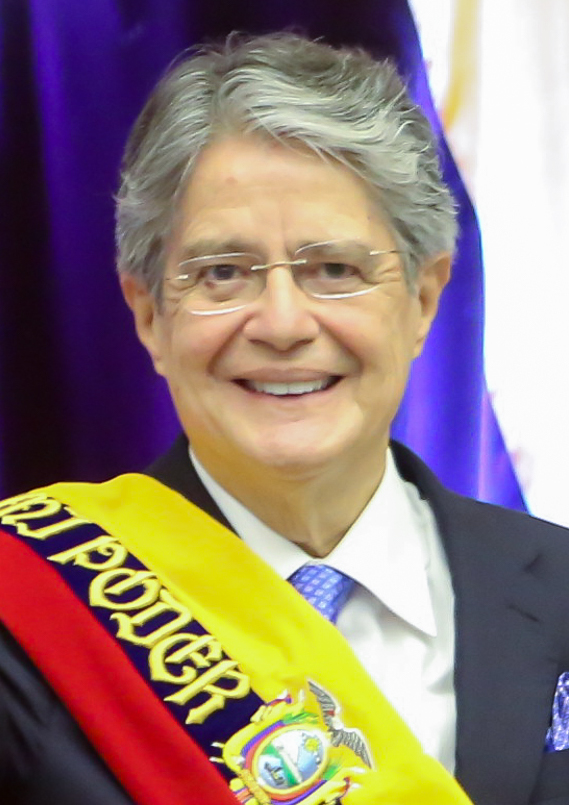 Guillermo Alberto Santiago Lasso Mendoza (Guayaquil, November 16, 1955) is an Ecuadorian businessman and politician, being the 55th president of the Republic of Ecuador, since May 24, 2021, succeeding Lenín Moreno. Guayaquil Bank. In addition, he was founder and president of the "Movimiento CREO - Creando Oportunidades", a party for which he contested the elections for President of Ecuador, on three occasions: 2013, 2017 and 2021, winning the last one, after defeating the socialist Andrés Arauz. In public administration, Lasso held various positions, he was governor of Guayas between 1998 and 1999, Minister of Economy and Energy in 1999, under President Jamil Mahuad, and Ambassador Itinerant of Ecuador in 2003.

He was born in the city of Guayaquil, on November 16, 1955. Lasso is the last of eleven siblings from an upper-class family. His father, Enrique Lasso Alvarado, was a civil servant from Quito, and his mother, Nora Mendoza, was originally from Portoviejo. In 1976, he met his future wife, María de Lourdes Alcívar Crespo, whom he married in 1980 and had 5 children.He studied at Colegio San José La Salle and worked to pay for his studies. He later studied business administration at the Instituto de Desarrollo Empresarial (IDE) in 1993. On October 11, 2011, the Universidad de las Américas awarded him the title of Doctor Honoris Causa. At age 23, he founded his first company, Constructora Alfa y Omega, with his brother Enrique Lasso, in 1978. He worked in several financial credit companies and, in the 1980s, he was vice president of the Coca-Cola branch in his country, in addition to representing the Japanese factory of Hino trucks. In 1994, he was appointed executive chairman of Banco Guayaquil, a position he held until 2012, when he decided to step away to dedicate himself to other projects. He is president of Fundación Ecuador Libre, a think tank on public policies that follow the principles of freedom and social solidarity.

Starting in 2011, Lasso took a public political stance, with presidential aspirations for the General Elections in Ecuador in 2013, creating the CREO movement, a center-right movement founded by former members of the UNO (Una Nueva Opción) movement. , Izquierda Democrática, Movimiento Concertación and members of Ecuador's private sector. He established a coalition "Unidos por el Ecuador" for the presidential elections, managing to obtain 22.68% of the valid votes (almost 2 million votes), still losing in the first round against then-president Rafael Correa. political militancy, always appearing in the national media with comments in opposition to the government of Rafael Correa.

Since 2015, Lasso has positioned himself as a pre-candidate for his party by organizing a collective "Compromiso Ecuador" with popular consultation on the new constitutional amendments that were being voted on by the Legislative Power. In the 2017 elections, Guillermo Lasso came in second in the first round and received 28.10% of the valid votes against 39.36% for the ruling candidate Lenín Moreno. most voted does not exceed 40% of valid votes, and must have more than 10% difference in relation to the second place. Therefore, after difficult electoral counting, a second round was declared on April 2, 2017 between Moreno and Lasso. Its main political platform consists of defending freedom of the press, fighting corruption, generating jobs with support for entrepreneurship in the country, legal security after a new constitutional reform and declaring itself against the socialism promoted by some countries, with reference to