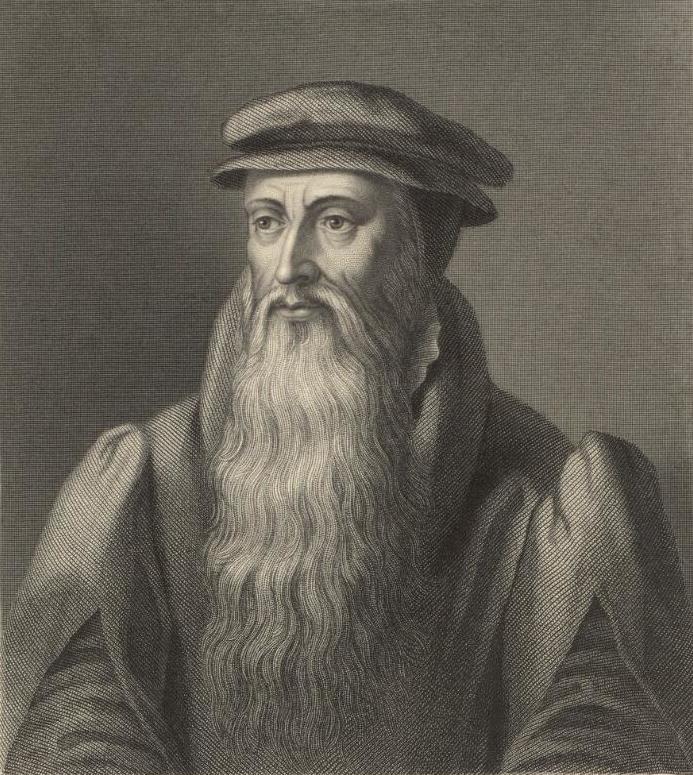 John Knox, English: John Canox (c. 1514—November 24, 1572) was a Scottish minister, theologian, and writer who led the Protestant Reformation in Scotland. He was the Reformer of the Church of Scotland, and the founder of Presbyterianism. Born in Giffordgate, a street in Haddington, East Lothian, Knox is believed to have been educated at the University of St Andrews and worked as a notary-priest. Influenced by early church reformers such as George Wishart, he joined the movement to reform the Scottish church. He was caught up in the ecclesiastical and political events surrounding the assassination of Cardinal David Beaton in 1546 and the intervention of the regent Maria de Guise. He was taken prisoner by French forces the following year and exiled to England when he was released in 1549. During the exile, Knox was licensed to work in the Church of England, where he rose through the ranks to serve King Edward VI of England as royal chaplain . He exerted a reforming influence on the text of the Book of Common Prayer. In England he met and married his first wife, Margery Bowes. When Mary I ascended the throne of England and re-established Roman Catholicism, Knox was forced to resign and leave the country. Knox moved to Geneva and then to Frankfurt. In Geneva he met John Calvin, from whom he gained experience and knowledge of Reformed theology and Presbyterian government. He created a new order of service, which was eventually adopted by the Reformed church in Scotland. He left Geneva to head the English refugee church in Frankfurt, but was forced to drop differences over the liturgy, thus ending his association with the Church of England. On his return to Scotland, Knox led the Protestant Reformation in Scotland, in partnership with the Scottish Protestant nobility. The move can be seen by some as a revolution, as it led to the ousting of Maria de Guise, who ruled the country on behalf of her young daughter Maria, Queen of Scots. Knox helped write the new confession of faith and ecclesiastical order for the Reformed church, the Kirk. He wrote his five volume A History of the Reformation in Scotland between 1559 and 1566. He continued to serve as the religious leader of the Protestants during the reign of Mary of Scotland. In several interviews with the Queen, Knox admonished her for supporting Catholic practices. After she was arrested for her role in the murder of her husband, Lord Darnley, and King James VI was enthroned in her place, Knox openly called for her execution. He continued to preach until his last days.

There is no record that Knox professed the Protestant faith, but Presbyterian tradition believes that this was in 1545, as he had previously shown signs of sympathy for these ideas. According to East Lothian native Thomas Guillaume Calderwood, the Order of Blackfriars in 1543 was the first to "give Mr. Knox a whiff of truth." His original change of mind has been attributed to his study of Augustine and Jerome in his youth, as noted. In fact, little is known about the first 30 years of his life. Much influenced by George Wishart, he became his follower in 1546, the year in which Wishart was burned as a heretic. This scholar was probably the immediate instrument of his conversion for he had returned, after a period of expulsion, in 1544, and died on the scaffold, Cardinal Beaton's last and illustrious victim. Among other places where he preached Protestant Reform doctrines, Wishart had been to East Lothian in December 1545, and there Knox must have met him. It could be said that Knox's almost youthful enthusiasm for the doctrine would have moved him. Knox followed him relentlessly as his bodyguard, and would carry a sword, willing to use it to defend Wishart from the emissaries of the cardinal who