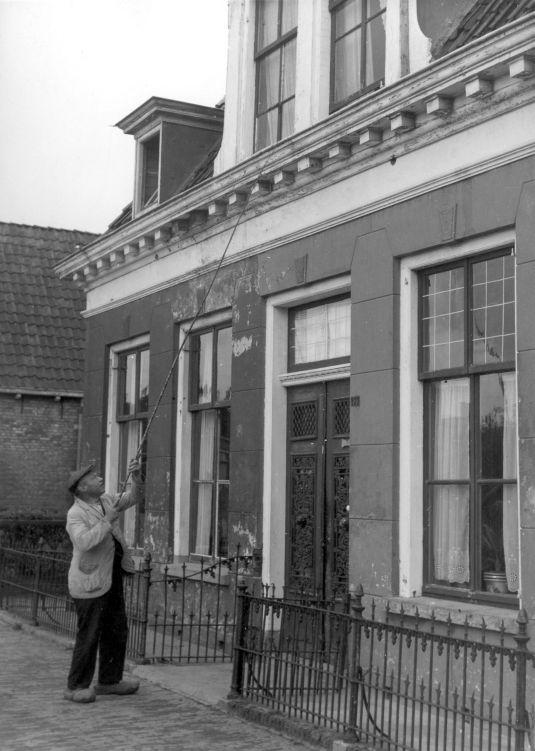 A knocker-up, sometimes known as a knocker-upper or caller-up (translated into English as "alarm clock" or "human alarm clock"), was a profession in Great Britain and Ireland that began during and lasted until the Industrial Revolution. , when alarm clocks were neither cheap nor reliable. A knocker-up's job was to wake up sleeping people so they could get to work on time. By the 1940s and 1950s this profession had disappeared, although it still continued in some parts of industrial England until the early 1970s. long and light, often made of bamboo, to reach the windows of the higher floors. A 1931 photograph shows a knocker-upper in East London tossing peas at a customer's window with a straw (as a sort of blowgun). In exchange for the task, the knocker-up would be paid a few cents a week. Some knocker-uppers wouldn't leave a customer's window until they were sure the customer had woken up, while others simply knocked several times and then moved on. . The work was usually done by elderly men and women, but sometimes police officers supplemented their pay by performing the task during morning patrols. Charles Dickens's book Great Expectations, magnum opus, includes a brief description of a knocker-upper, who also appears in the story of the Jack the Ripper murders in East London.

«Silent footage of a knocker-up c.1946». . Produced by Sam Hanna at Burnley (Vimeo - North West Film Archive) Woodcock, George (March 1944). «The Tyranny of the Clock» (in English). Accessed March 12, 2022. Archived from the original January 28, 2005 «Knocker-up Man in action» (in English). . Apparently in Oldham «The Knocker-up Man» (in English). . Interpretation of Mike Canavan's song describing the profession «A Miner's House Slate» (in English). at Ferryhill. A mining town in the northeast of England.