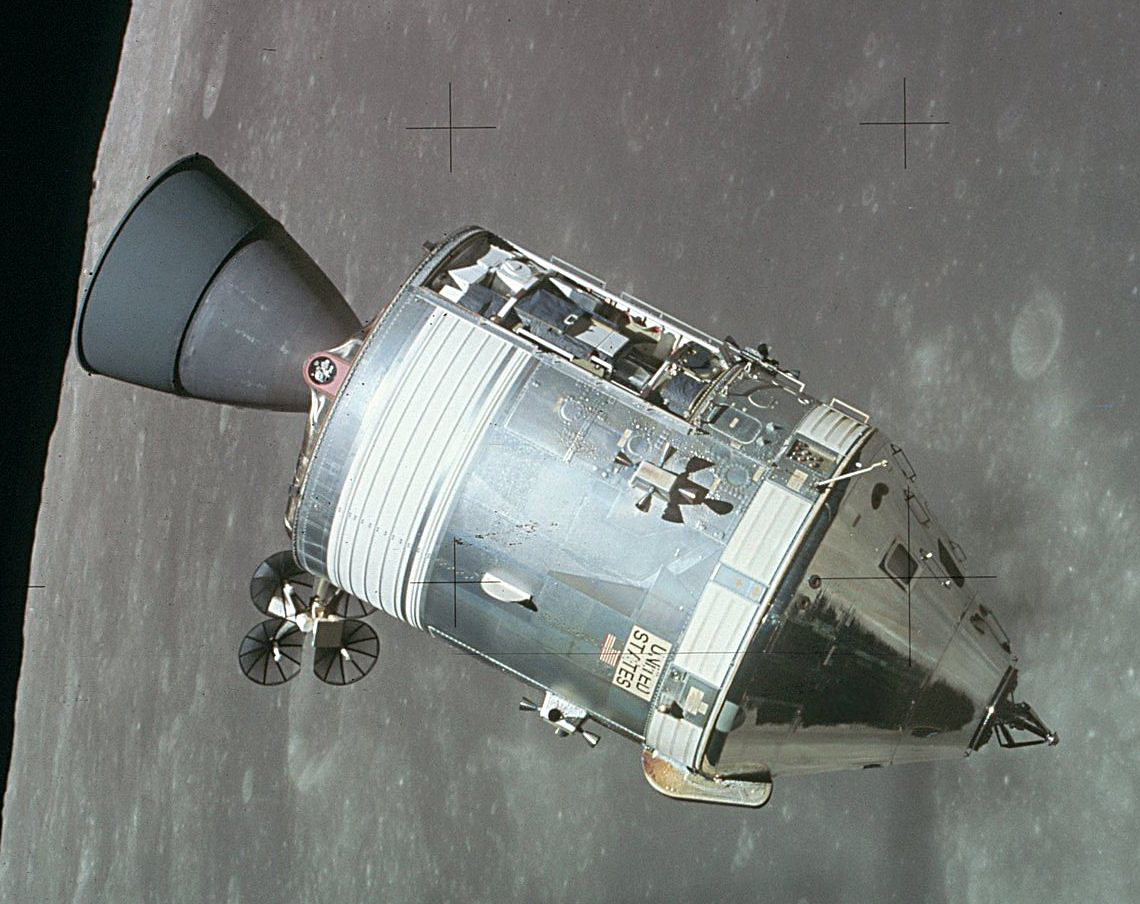 Apollo Command and Service Module was one of the parts of the spacecraft used in Project Apollo (the other part was the Lunar Apollo Module). It consisted of two parts: Command Module and Service Module. Both always act together, disconnecting only when re-entering the Earth's atmosphere. The Command Module is the capsule, it has a conical shape, which the astronauts occupied during most of the trip, and was the only part that re-entered the atmosphere land, falling by parachute. The Service Module, cylindrical in shape, contained the life-sustaining equipment (such as oxygen cylinders) and engines. These two modules worked together, forming a set whose objective was to keep the astronauts safe during the trip and for re-entry into the Earth's atmosphere. For re-entry into the Earth's atmosphere, the Command Module had a heat shield, which allowed the vehicle to resist to the high temperatures generated by reentry, and a parachute system. The Command Module was the control center of the Apollo spacecraft and the space to hold Apollo astronauts during missions. It contained the pressurized main cabin, crew seats, instrument and control panel, electronic and optical steering systems, communications systems, environment control system, batteries, heat shield, reaction control system, feedback device. coupling, five windows and the parachute system. The Service Module was the part of the spacecraft that was not pressurized and contained the fuel cells, batteries, high-gain antenna, radiators, water, oxygen, hydrogen, control system reaction, propellant to leave lunar orbit, and service propulsion system. On the Apollo 15, Apollo 16 and Apollo 17 missions he also carried a pack of scientific instruments, mapping camera and a small sub-satellite to study the Moon. Most of the Apollo Service Module is taken up by the propellant and the rocket engine which places the spacecraft in lunar orbit and then returns it to Earth. The main engine is also used for course corrections during the trip to the Moon. The Service Module remains coupled to the Command Module throughout the mission, disconnecting from it only for re-entry into the Earth's atmosphere (only the Command Module re-enters ).The Apollo Command and Service Module was designed and manufactured by "North American Aviation", an aircraft manufacturer in the United States, which had previously manufactured some experimental aircraft for NASA.

Concepts of an advanced crew spacecraft began before the announcement of the Moon landing goal. The three-person vehicle would be primarily for orbital use around the Earth. This would include a large pressurized auxiliary orbital module where the crew would live and work for weeks on end. They would perform space-station-like activities on the module, while later versions would use the module to transport cargo to space stations. The spacecraft served Project Olympus (LORL), a single revolving, folding space station launched on a single Saturn V. Later versions would be used in circumlunar flights and would be the basis for a direct-ascent lunar spacecraft, as well as for use in interplanetary missions. In the late 1960s, NASA called on US industry to propose designs for the vehicle. On May 25, 1961, President John F. Kennedy announced the goal of landing on the Moon before 1970, which completely circumvented plans for NASA's Olympus Orbital Station.

When NASA awarded the initial Apollo contract to North American Aviation on November 28, 1961, it was still assumed that the lunar landing would be accomplished by direct ascension rather than by rendezvous in