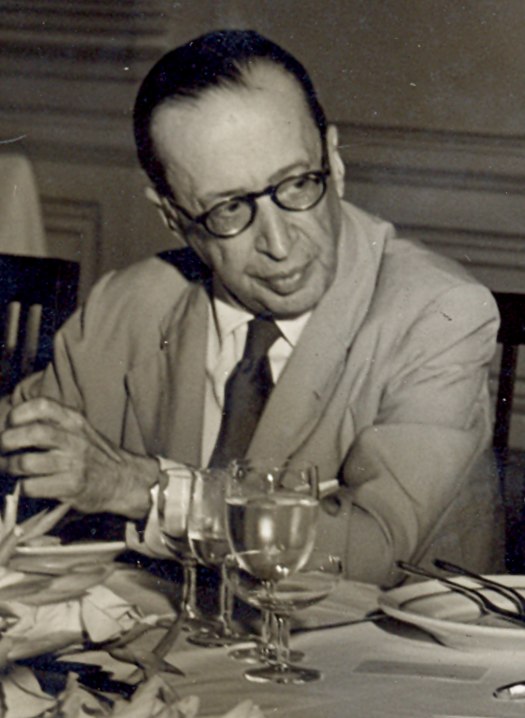 Manuel Carneiro de Sousa Bandeira Filho (Recife, April 19, 1886 — Rio de Janeiro, October 13, 1968) was a Brazilian poet, literary and art critic, literature professor and translator. He is considered part of the 1922 generation of modernism in Brazil. His poem "Os Sapos" was the opening wing of the Week of Modern Art. Together with writers such as João Cabral de Melo Neto, Gilberto Freyre, Clarice Lispector and Joaquim Cardozo, among others, he represents the best of literary production in the state of Pernambuco. The topics covered by Bandeira are wide and varied. Among the themes constantly present are eroticism, pessimism and death, among many others. Despite being an atheist, themes such as Christian mysticism appear in his poetry, alongside a poetry focused on libertine love and carnal desire, for example.

Son of engineer Manuel Carneiro de Sousa Bandeira and his wife Francelina Ribeiro de Sousa Bandeira, he was the paternal grandson of Antônio Herculano de Sousa Bandeira, lawyer, professor at the Recife Faculty of Law and general deputy in the 12th legislature. Having two clearly important uncles, one, João Carneiro de Sousa Bandeira, who was a lawyer, professor of law and member of the Brazilian Academy of Letters, and the other, Antônio Herculano de Sousa Bandeira Filho, who was the older brother of his father and he was a lawyer, attorney for the crown, author of an expressive legal work and was also President of the Provinces of Paraíba and Mato Grosso. His maternal grandfather was Antônio José da Costa Ribeiro, a lawyer and politician, deputy general in the 17th legislature. Costa Ribeiro was the grandfather mentioned in "Evocação do Recife". His house on Rua da União is referred to in the poem as "my grandfather's house". In Rio de Janeiro, where he traveled with his family, due to his father's profession, a civil engineer at the Ministry of Transportation, he studied at Colégio Pedro II (National Gymnasium, as the first republicans called it). He was a student of Silva Ramos, José Veríssimo and João Ribeiro, and had as fellow disciples Álvaro Ferdinando Sousa da Silveira, Antenor Nascentes, Castro Menezes, Lopes da Costa, and Artur Moses. In 1903, he finished the Humanities course, the family moved to São Paulo, where he started the architecture course at the Polytechnic School of São Paulo, which he interrupted because of tuberculosis (1904). To treat himself, he sought rest in Campanha, Teresópolis and Petrópolis. With the help of his father, who gathered all the family's savings, he went to Switzerland, where he stayed at the Sanatorium of Clavadel, where he stayed from June 1913 to October 1914, where he had the poet Paul Eluard as a colleague in the sanatorium. Due to the start of the First World War, he returned to Brazil. Upon his return, he started in literature, publishing the book "A Cinza das Horas", in 1917, in an edition of 200 copies, paid for by himself. Two years later, he published his second book, "Carnival". In 1935, he was appointed federal inspector of education. In 1936, "Homenagem a Manuel Bandeira" was published, a collection of studies on his work, signed by some of the greatest critics of the time, thus achieving public acclaim. From 1938 to 1943, he was professor of literature at Colégio D. Pedro II. In 1940 he was elected a member of the Brazilian Academy of Letters. Later, he was appointed professor of Hispano-American Literature at the Faculty of Philosophy of the University of Brazil, a position from which he retired in 1956. Manuel Bandeira died on October 13, 1968, with gastric hemorrhage, at the age of 82, in Rio de Janeiro, and was buried in tomb 15 of the mausoleum of the Academia Brasileira de Letras, in the São João Batista Cemetery.

He was elected to the Brazilian Academy of Letters, where he was the third occupant of chair 24, whose patron is Júlio Ribeiro. His election took place on August 29, 1940, succeeding Luís Guimarães Filho, and was received by the academic