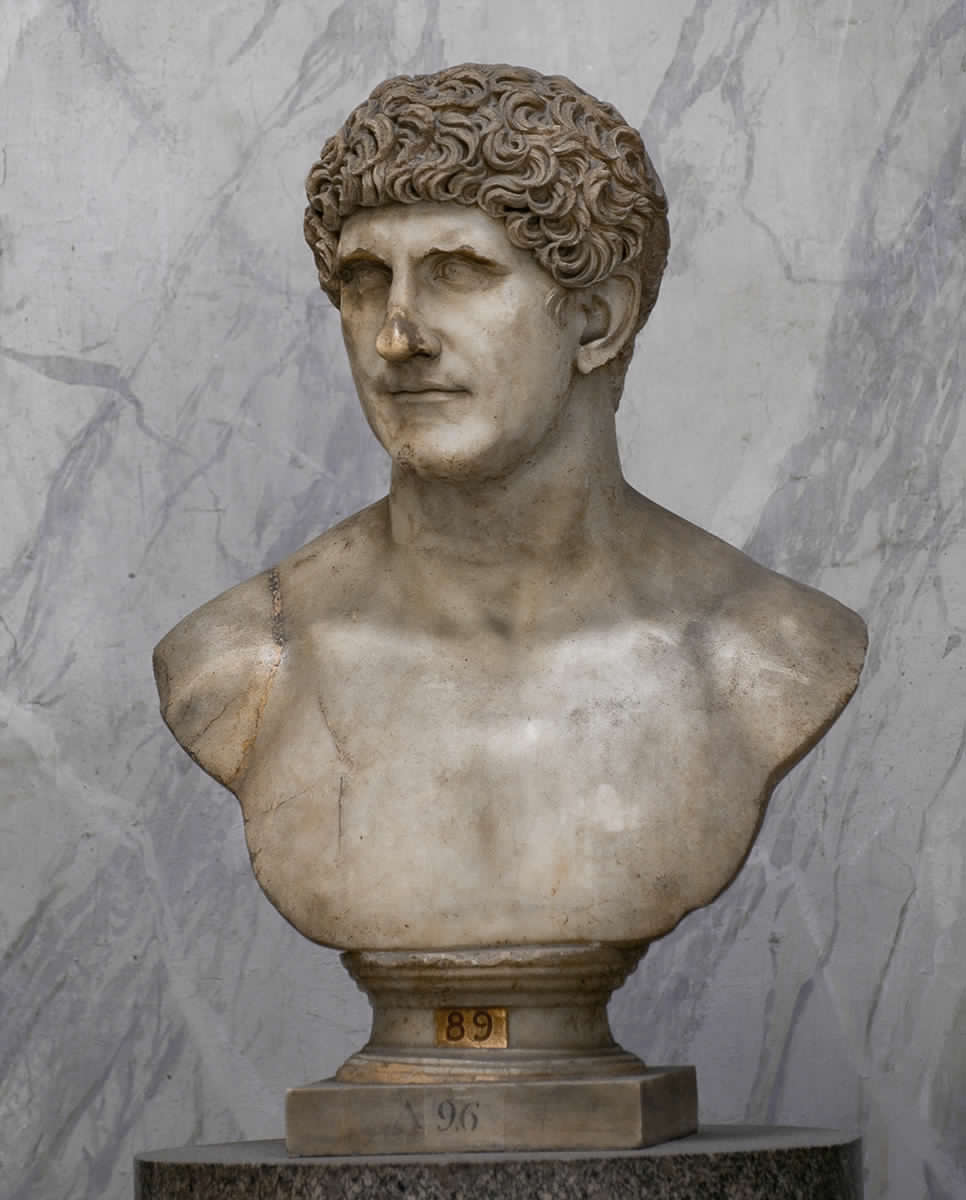 Marco Antônio (Brazilian Portuguese) or Marco António (European Portuguese) (83–30 BC; Latin: Marcus Antonius), also known simply as Antônio, was a politician of the gens Antonia of the Roman Republic appointed consul three times, in 44, 34 and 31 BC with Julius Caesar (and Publius Cornelius Dolabela after his death), Lucius Scribonius Libon and Octavian respectively. He was also the dictator's cavalry master in 48 and 47 BC. Antony was an ally of Caesar and served with him during the conquest of Gaul and in the civil war against Pompey. He was appointed administrator of Italy while Caesar consolidated his power in Greece, Africa and Hispania. After Caesar's assassination in 44 BC, Antony joined Marcus Aemilius Lepidus, Caesar's other great general, and Octavian, who was his nephew and adopted son, forming a three-man dictatorship known as the Second Triumvirate. The triumvirs waged war against the liberatores, as Caesar's assassins were called, and defeated them at the Battle of Philippi (42 BC), dividing the Republic's command from then on. Antony was given the eastern provinces, including the client kingdom of Egypt, ruled at the time by Cleopatra VII Philopator, and command of the war against the Parthians. Relations between the triumvirs were quite difficult as they fought each other to accumulate more and more power and influence. The civil war between Antony and Octavian was averted in 40 BC through the marriage of Octavian's sister Octavia the Minor to Antony. Despite the marriage, Antony maintained his love affair with Cleopatra, who bore him three children, which only worsened his relationship with Octavian. Lepidus was expelled from the group in 36 BC, and in 33 BC, discord between the two remaining triumvirs caused a schism between the two. Hostilities finally resulted in civil war in 31 BC, when the Roman senate, at the instigation of Octavian, declared war on Cleopatra and proclaimed Antony a traitor to his country. In the same year Antony was defeated by Octavian's forces at the Battle of Actium. Defeated, Antony and Cleopatra fled to Egypt and killed each other together. With Antony dead, Octavian was the undisputed master of the entire Roman world. In 27 BC, he was given the title of "Augustus", the final milestone in the transformation of the Roman Republic into the Roman Empire, with Octavian himself, now called simply Augustus, as its first Emperor.

A member of the plebeian people of the Antonians, Antony was born in Rome on January 14, 83 BC His eponymous father was known as Mark Antony Crético, son of the famous Mark Antony Orador, murdered during the persecutions that followed the capture of Rome by the forces of Gaius Marius in the winter of 87−6 BC His mother was Julia Antonia, a distant cousin of Julius Caesar (Lucius Julius Caesar was her grandfather and great-grandfather). Antony was a child at the time of Sulla's march on Rome in 82 BC. According to the Roman orator Cicero, Antony's father was incompetent and corrupt and was only given any power precisely because he was unable to use or abuse it effectively. In 74 BC, he was given a military command to defeat the pirates ravaging the Mediterranean, but he died in Crete in 71 BC without making any progress. The death of Antônio the senior left Antônio and his brothers, Lucius and Caio, in the care of their mother, Julia, who married Publius Cornelius Lentulus Sura, an eminent member of the ancient patrician nobility. Lentulus, despite exploiting his political success to enrich himself, was constantly in debt because of his extravagant lifestyle. He was one of the protagonists in Catiline's Second Conspiracy and was summarily executed on the orders of the consul Cicero in 63 BC for his involvement. His death provoked a perpetual resentment between Júlia Antonia and the famous orator. the first years