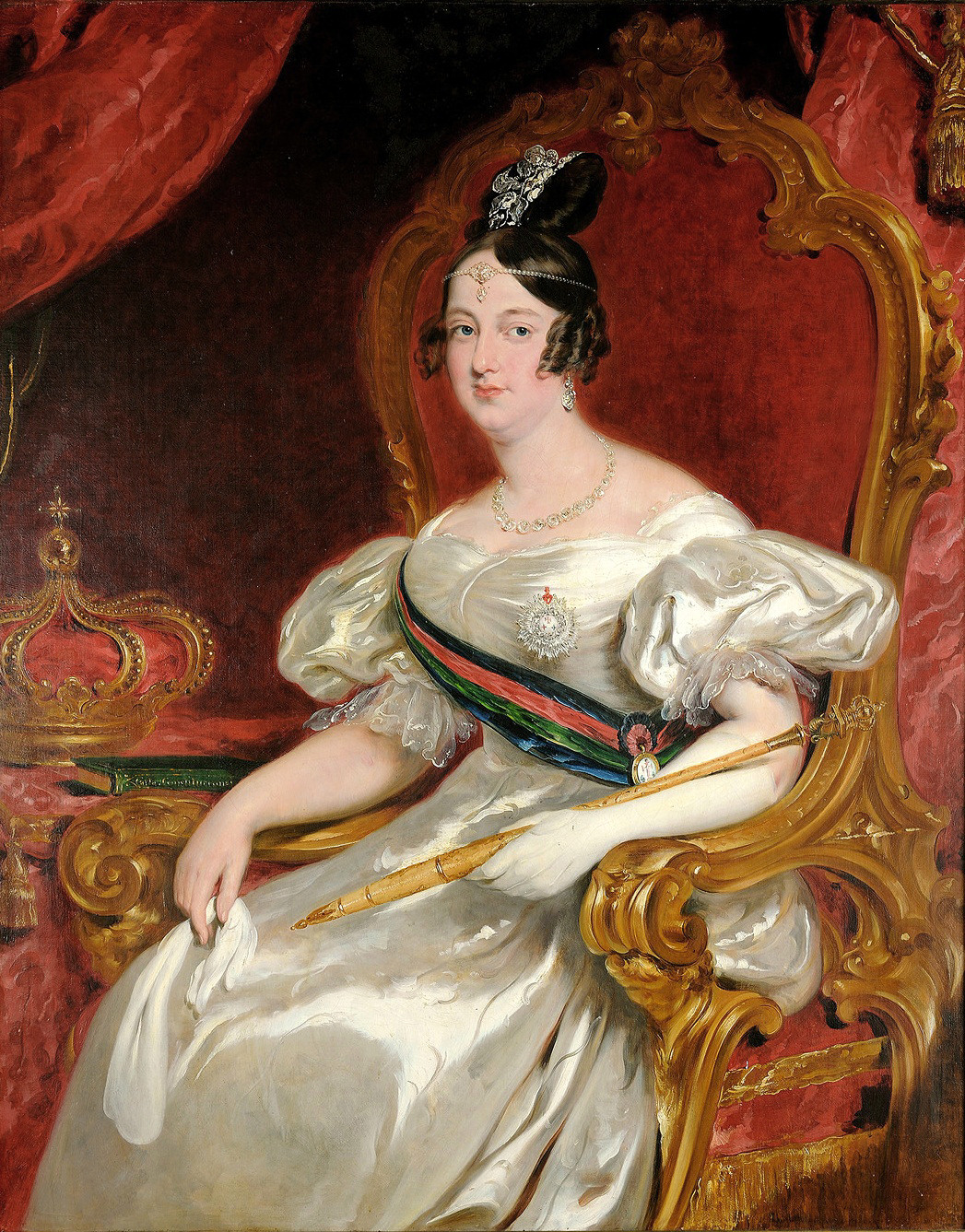 Maria II of Portugal (full name: Maria da Glória Joana Carlota Leopoldina da Cruz Francisca Xavier de Paula Isidora Micaela Gabriela Rafaela Gonzaga; Rio de Janeiro, April 4, 1819 – Lisbon, November 15, 1853), nicknamed "the Educator " and "the Good Mother", she was the Queen of Portugal and the Algarves on two different occasions: first from 1826 to 1828, when she was deposed by her uncle Miguel; then, from 1834 until her death in 1853. She was the eldest daughter of Emperor Pedro I of Brazil - who also briefly reigned in Portugal, as Pedro IV - and of his first wife, the Empress Consort of Brazil and Queen Consort of Portugal and the Algarves, Archduchess Maria Leopoldina of Austria.

Dona Maria da Glória Joana Carlota Leopoldina da Cruz Francisca Xavier de Paula Isidora Micaela Gabriela Rafaela Gonzaga was born on April 4, 1819 at São Cristóvão Palace, city of Rio de Janeiro, Kingdom of Brazil, under the title of Princess of Beira and later Imperial Princess of Brazil. She was the eldest daughter of the then royal prince Pedro de Alcântara and his first wife, Archduchess Maria Leopoldina of Austria. Maria da Glória was the only European monarch to be born outside of European lands.

Beginning of the reign

Pedro ascended to the Portuguese throne in March 1826 as Pedro IV, but quickly abdicated in favor of his eldest daughter, who became Queen of Portugal and the Algarves as Maria II, then only seven years old. Queen Maria II left Rio de Janeiro on July 5, 1828, accompanied by Felisberto Caldeira Brant, Marquis of Barbacena, who had been chosen by Pedro himself to accompany her. Infante Miguel, his paternal uncle, arrived in Lisbon on the 9th of February 1828 and disembarked on the 22nd, receiving the regency from the hands of his eldest sister, Infanta Isabel Maria, ratifying on the 26th of February the oath he had sworn to the constitutional charter before the courts that Isabel Maria had convened, but it did not take long to change her resolution. Miguel dissolved the courts on March 13, convening on May 3 the council of the three States to decide who owned the crown, according to the old way of the courts of the country, when it came to serious points of law. The council met on June 21 and Miguel was proclaimed king four days later in a hasty resolution, in view of the act of recognition of the heir to the crown provided by the regency and royal chamber of peers, established by the constitutional charter, on the succession of the House of Bragança in the two crowns of Portugal and Brazil, and particularly in that of Portugal, already indicated in the conferences held in London in August 1823. It is also in the preliminaries of the treaty of August 25, 1823, which recognized the Independence of Brazil, where in this regard the following Secret Article was presented at the conference of August 9: "As for the acceptance of the personal resignation of the Emperor of Brazil , Pedro, to the Crown of Portugal, the Courts of Portugal must determine which of the emperor's sons will be called to the succession of that crown on the death of the present king: it is understood that the said courts may call to the succession the eldest son of the said emperor of the Brazil, or the eldest daughter, in the absence of male offspring". Miguel resided in Vienna, where he was sent, by royal letter of 12 May 1824, after the revolt of 30 April or Abrilada. The Brazilians did not accept that the emperor girdled the Portuguese crown, which would result in the unity of the old monarchy, from which they had freed themselves. Pedro, after being proclaimed King of Portugal, decided to abdicate the Portuguese crown in his eldest daughter, Maria da Glória, on May 3, and on April 29 he granted the Portuguese a free constitution, the constitutional charter. The abdication was conditional: the princess would marry her uncle, Miguel, and until the consortium took place,