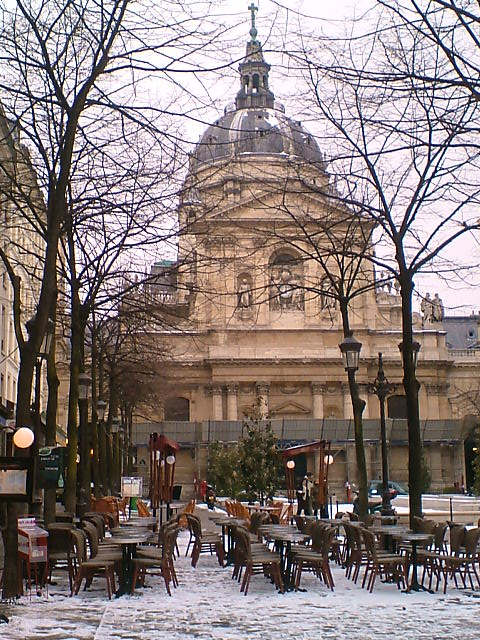 The Sorbonne is a historic building in the Latin Quarter of Paris, which has housed the main university in Paris since 1200, the second oldest university in history. The name Sorbonne alludes to the thirteenth-century theologian Robert de Sorbon, founder of the College of Sorbonne in 1257, which at the time was dedicated to the teaching of theology. In common language, the name Sorbonne came to identify the entire University of Paris.

The college was founded in 1253 by Robert de Sorbon. Louis IX of France confirmed the foundation in 1257. It was one of the first significant faculties of the medieval University of Paris. The library was one of the first to organize items alphabetically by title. The university predates the college by about a century, and smaller colleges had already been founded during the late 12th century. During the 16th century, the Sorbonne became involved in the intellectual struggle between Catholics and Protestants. The University served as an important stronghold of conservative Catholic attitudes and as such led a struggle against King Francis I's policy of relative tolerance of French Protestants, except for a brief period during 1533 when the University was placed under Protestant control. The Sorbonne, acting in conjunction with the Catholic Church, condemned 500 printed works as heretical between 1544 and 1556. The Collège de Sorbonne was suppressed during the French Revolution, reopened by Napoleon in 1808 and finally closed in 1882. This was just one of many colleges of the University of Paris that existed until the French Revolution. Hastings Rashdall, in The Universities of Europe in the Middle Ages (1895), which is still a standard reference on the subject, lists some 70 university faculties from the Middle Ages alone; some of them were short-lived and disappeared before the end of the medieval period, but others were founded in the early modern period, such as the Collège des Quatre-Nations.

Over time, the faculty grew to be the leading French institution for theological studies and "Sorbonne" was often used synonymously with the Faculty of Theology in Paris, despite it being only one of the university's many faculties.

After months of conflict between students and authorities at the University of Paris in Nanterre, the administration closed the university on May 2, 1968. Students at the Sorbonne campus in Paris gathered on May 3 to protest the closure and the threat of expulsion of several students in Nanterre. On May 6, the national student union, Union Nationale des Étudiants de France (UNEF) – still the largest student union in France today – and the university professors union called a march to protest the police raid on the Sorbonne. More than 20,000 students, teachers and other supporters marched towards the Sorbonne, still cordoned off by police, who attacked, wielding their truncheons, as protesters approached. As the crowd dispersed, some began to make barricades with whatever was within reach, while others threw stones from the pavement, forcing the police to retreat for a while. The police then responded with tear gas and attacked the crowd again. Hundreds of students were arrested. The 10th of May marked the "Night of the Barricades", where students used cars, wood and cobblestones to barricade the streets of the Latin Quarter. Brutal street fighting took place between students and riot police, mainly on Rue Gay-Lussac. Early the next morning, when the fighting was over, Daniel Cohn-Bendit sent out a radio broadcast calling for a general strike. On Monday, May 13, more than a million workers went on strike and students declared that the Sorbonne was "open to the public". The negotiations