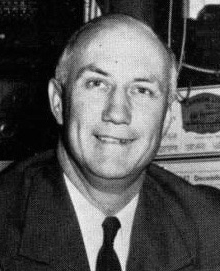 James Strom Thurmond (Edgefield, December 5, 1902—Edgefield, June 26, 2003) was an American politician. He was governor of South Carolina from 1947 to 1951 and a US senator for the same state for 48 years. He also ran for president in 1949, when he won 2.4% of the popular vote and 39 Electoral College votes. He was a member of the Democratic Party between 1946 and 1948, of Dixiecrat in 1948, again of the Democratic Party between 1948 and 1964, and of the Republican Party between 1964 and 2003. He served in the United States Senate between 1954 and 1956 and between 1956 and 2003. On leaving the office, was the longest-serving senator in American history, though he was later surpassed by Robert Byrd and Daniel Inouye in time of service. He left the position of senator at the age of one hundred, also becoming the oldest person to serve a term in the senate. To this day, he is the only member of one of the US Houses of Congress to reach the age of one hundred. Known for his defenses of segregationist policies, he was discovered in 2003 to have a biracial daughter, Essie Mae Washington-Williams , born in 1925 to Afro-American domestic worker Carrie Butler. He has never publicly shown, however, regret for his segregationist agendas, even though his campaign against desegregation has been his main contribution to US political history.