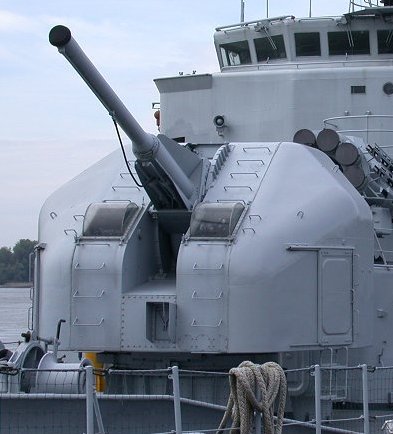 An artillery turret or gun turret is a device that is intended to protect an artillery gun and its garrison, while allowing the gun to be aimed and fired in multiple directions. The artillery turret essentially consists of an armored turntable. It can be mounted on a fixed fortification, a warship, an armored vehicle or an aircraft. Turrets can be armed with one or more machine guns, light cannons, large caliber pieces or missile launchers. Each tower can be operated manually or via remote control. Smaller turrets, whether or not mounted on larger turrets, are called "turrets". The tower serves to protect your garrison and weapons against enemy fire and inclement weather. The term "tower" originates from the analogy of artillery towers with the towers of ancient medieval castles.

A warship turret is a rotating artillery repair, typically covered by an armored dome that protects the guns and guns.

Prior to the development of large-caliber, long-range artillery pieces in the mid-19th century, ships of the line had rows of side-mounted guns installed on each side of the vessel, often installed in pillboxes. The firepower originated in the large number of pieces that could only be aimed within an arc limited to one of the sides of the ship. Due to the instability of the ship, many larger and heavier weapons could not be carried. In addition, the casemates were often located close to the waterline, which made them vulnerable to flooding, restricting their use to calm waters. The turrets would allow fewer guns to be aimed and fired towards both sides of the ship, while providing armored protection to the garrison. One of the world's first tower ships and the first to see combat was the US Navy's USS Monitor. The Monitor had two muzzle-loading pieces mounted on a central rotating armored turret. An alternative system, used at the time, used the barbeta, which consisted of a fixed open armored turret, inside which was the artillery piece that rotated, with its tube projecting over the parapet of the tower. In later projects, an armored cover was installed over the barbette. With the advent of North American South Carolina-class battleships in 1908, the main battery turrets were designed to fire on top of each other to improve firing arcs with weapons centered on the ship's centerline. This was due to the need to move all main battery turrets to the centerline for an improvement in the structural support of the ships. This was in stark contrast to the contemporary British battleship HMS Dreadnought which, while revolutionary in many ways, still retained side turrets. Other major innovations were Japanese Kongō-class and British Queen Elizabeth-class battleships that dispensed with the "Q" turret amidships in favor of heavier parts in fewer repairs. While World War I ships often had a double turret configuration, by the time of World War II triple and even quadruple turrets were more frequent, which reduced the number of artillery repairs to the ship, at the same time, improving armored protection. The quadruple towers, however, proved to be too complex and not very operational. The largest battleship turrets ever were those installed on World War II battleships, in which an ironclad box protected a large garrison during combat. The main armament caliber of large battleships was typically 300 mm to 450 mm. Each of the towers assembling pe