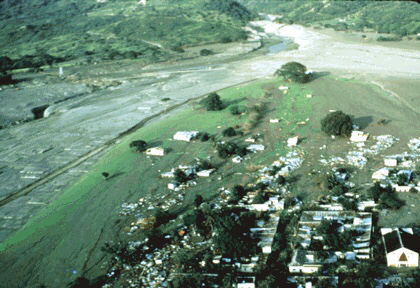 The Armero tragedy (Spanish: Tragedia de Armero [tɾaˈxeðja ðe aɾˈmeɾo]) occurred after the eruption of the Nevado del Ruiz stratovolcano in Tolima, Colombia, on November 13, 1985. After 69 years of dormancy, the volcano's eruption took the nearby cities without warning, although the government has received alerts. As pyroclastic flows erupted from the volcano's crater, they melted the mountain's glaciers, sending four massive lahars (volcanically induced mud flows, landslides and debris flows) down its slopes at 50 km/h. The lahars gained speed in ravines and engulfed the city of Armero, killing more than 20,000 of its nearly 29,000 inhabitants. Victims in other cities, particularly Chinchiná, brought the total death toll to 23,000. Images and photographs of Omayra Sánchez, a young victim of the tragedy, were published around the world. Other photos of the lahars and the impact of the disaster drew worldwide attention and sparked controversy over the Colombian government's degree of responsibility for the disaster. A banner at a mass funeral in Ibague read: "The volcano didn't kill 22,000 people. The government killed them." Relief efforts were hampered by the composition of the mud, which made it nearly impossible to move without getting stuck. When aid workers arrived in Armero twelve hours after the eruption, many of the seriously injured victims were dead. Aid workers were horrified by the landscape of fallen trees, disfigured human bodies and piles of wreckage from entire homes. This was the second deadliest volcanic disaster of the 20th century, surpassed only by the eruption of Mount Pelée in 1902 and is the fourth deadliest volcanic event recorded since the year 1500. The event was a predictable catastrophe exacerbated by the population's ignorance of the destructive history of the volcano; geologists and other experts warned authorities and media about the danger in the weeks and days leading up to the eruption. Neighborhood hazard maps were prepared but poorly distributed. On the day of the eruption, several evacuation attempts were made, but a severe storm restricted communications. Many victims remained in their homes as instructed, believing the eruption was over. The noise of the storm may have prevented many from hearing the sounds of the eruption until it was too late. Nevado del Ruiz has erupted several times since the disaster and continues to threaten up to 500,000 people living along the valleys of the Combeima, Chinchiná, Coello-Toche and Guali rivers. A lahar (or group of lahars) similar in size to the 1985 event can travel up to 100 km from the volcano and can be triggered by a small eruption. To counter this threat, the Colombian government created a specialized office that promotes awareness of natural threats. The United States Geological Survey also created the Volcanic Disaster Assistance Program and the Volcanic Crisis Assistance Team, which evacuated some 75,000 people from the area around Mount Pinatubo before its eruption in 1991. In 1988, three years after the eruption, Dr. Stanley Williams of Louisiana State University said that "with the possible exception of Mount St. Helena in Washington state, no other volcano in the Western Hemisphere is being observed as elaborately" as Nevado del Ruiz. Many of Colombia's cities have campaigns to raise awareness of natural disaster planning programs that have helped save lives. Near Nevado del Ruiz in particular, locals became suspicious of volcanic activity: when the volcano erupted in 1989, more than 2,300 people who lived around it were evacuated.