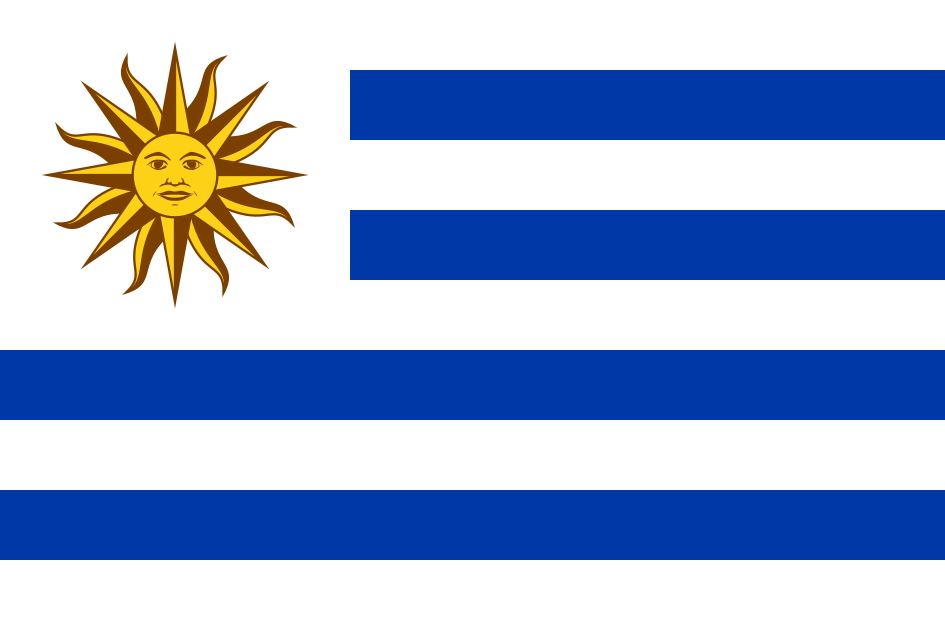 Uruguay (Spanish: Uruguay, pronounced: [uɾuˈɣwaj]), officially the Oriental Republic of Uruguay (Spanish: República Oriental del Uruguay, pronounced: [reˈpuβlika oɾjenˈtal del uɾuˈɣwai]), is a country located in the southeastern part of South America. Its population is around 3.5 million, of which 1.8 million live in the capital, Montevideo, and its metropolitan area. It is estimated that between 88% and 94% of the population has mainly European or mixed-race descent. Uruguay's only land border is with the Brazilian state of Rio Grande do Sul in the north, being Brazil's second smallest border with another South American country. To the west is the Uruguay River and to the southwest is the River Plate estuary. The country borders Argentina only on a few banks of any of the rivers mentioned above, while to the southeast is the Atlantic Ocean. Uruguay is the second smallest country in South America, being only bigger than Suriname. Colonia del Sacramento, the oldest European settlement in Uruguay, was founded by the Portuguese in January 1680. In 1777, with the Treaty of Santo Ildefonso, the colony became a Spanish possession. The city of Montevideo was founded by the Spanish in the 18th century as a military fortress. Uruguay gained its independence from the Empire of Brazil between 1810 and 1828, after wars that involved Spain, Portugal, Argentina, as well as Brazil itself. Currently, the country is a constitutional democracy, where the president fulfills the role of head of state and head of government. According to Transparency International, Uruguay is ranked as the least corrupt country in Latin America (followed by Chile in second). Uruguay is one of the most economically developed countries in South America, with one of the highest GDP per capita, at 48. th place in the quality of life index (2011) and 1st in quality of life/human development in Latin America, when inequality is considered. It was the highest ranked Latin American country in the Legatum Prosperity Index. During the 2008–2009 financial crisis, the country was the only one on the American continent that did not experience a technical economic recession (two consecutive quarters of contraction). Uruguay is reimbursed by the United Nations for most of its military expenditures, as most of these expenditures are spent on UN peacekeeping forces. The country is known for being a pioneer in measures related to civil rights and democratization of society. In 1907, it was the first country to legalize divorce, and in 1932, the second country in America to grant women the right to vote. In 2007, it was the first South American country to legalize same-sex civil unions and allow same-sex adoption. In 2013, the country became the second South American nation to approve same-sex marriage and the first in the world to legalize the cultivation, sale and consumption of cannabis, which led the British magazine The Economist to classify Uruguay as the country of the year 2013, for promoting "innovative reforms that are not limited to just improving a country, but which, if imitated, could benefit the world". Reader's Digest also ranked Uruguay the ninth "most livable and green" country in the world and the first in America.

La República Oriental del Uruguay originally means the republic east of the [river] Uruguay and is usually translated into Portuguese as República Oriental del Uruguay, while the government normally uses just Uruguay to refer to the country. The etymology of the name of the homonymous river, which comes from the Guarani language, is uncertain, but the official meaning is "river of painted birds".

The Spaniards arrived in present-day Uruguay in 1516. The fierce resistance of the natives, combined with