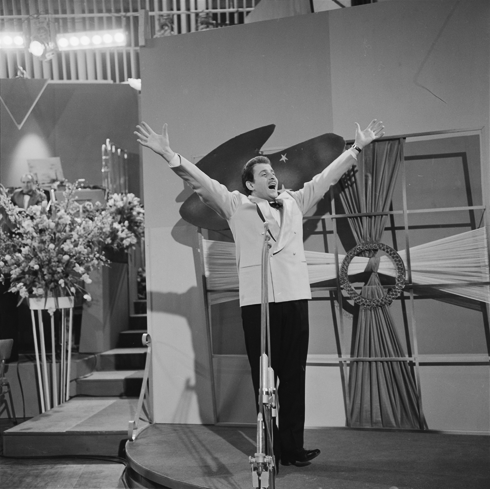 Nel blu dipinto di blu [nel ˈblu diˈpinto di ˈblu] (in Portuguese: "In the blue painted in blue"), popularly known as Volare is a song that became the first Grammy winner in 1958. only song in a language other than English to achieve such a feat. It is also one of the 7 foreign-language songs to reach the top of the Billboard Hot 100. In total, it spent five (non-consecutive) weeks on the Hot 100, between August and September 1958. The song was Italy's entry in the Eurovision Song Contest 1958 which took place in Hilversum in the Netherlands on 12 March of that year. It was performed in Italian by Domenico Modugno. It was the first song to be performed on the night of the festival, before the Netherlands' song "Heel de wereld", performed by Corry Brokken. She finished in 3rd place, having received 13 points, despite everything she was much better known than André Claveau's winner of the night. It was popular all over the world, while the winner fell into obscurity. In 2019, for the first time, Volare's recording was transmitted wirelessly using a semiconductor laser.

The song is a chanson-style ballad, in which Modugno (Lyrics in Diggiloo Thrush) describes the feeling he feels like flying with his lover. The song opens in a surreal prelude. Due to broadcasting problems, the song was not heard in all countries and so it was performed at the end again, before voting began.

The song became internationally known as "Volare", taken from its chorus, reaching the tops of sales around the world and several translations appeared in several languages ​​"Воларе (Volare)" in Russian; "Dans le bleu du ciel bleu" in French, "En el azul del cielo" in Spain, "Jouw ogen" in Dutch-speaking Belgium, "Taivaan sinessä" in Finland, "In your eyes I see the sky" in Portugal and " Blue painted blue" in Brazil and Latin America. The song remains popular and finished in 2nd place in the Congratulations: 50th Anniversary of the Eurovision Song Contest (only surpassed by Waterloo by ABBA) as the best song in the Eurovision Song Contest up to that year. reached final 14.

Other artists who recorded the song