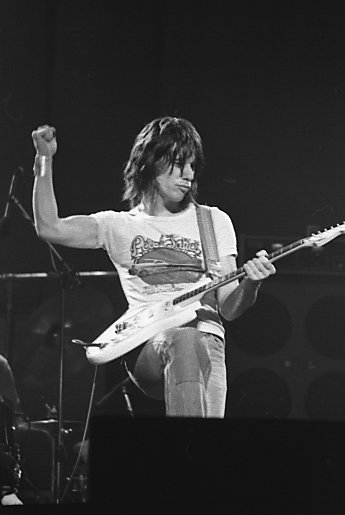 Jeff Beck (full name Jeffrey Arnold Beck, English Geoffrey Arnold Beck; born June 24, 1944, London) is a British guitar virtuoso, composer. Seven-time Grammy winner. At the beginning of his career, he played in the rock band The Yardbirds, then in 1967 he organized his own band The Jeff Beck Group. After that, he performed solo, and also collaborated with other performers as a guest musician. Beck's work has had a huge impact on styles of rock music such as blues rock, hard rock, fusion and others. From time to time, dramatically changing the direction of his musical activity, Beck each time reached the top in a new musical space. In 1990, according to a poll by The Observer, Beck was voted the most outstanding guitarist in the world. In 2003, Rolling Stone magazine named Jeff one of the 100 Greatest Guitarists of All Time, and in 2009 Beck was included in a similar list by the British magazine Classic Rock.

Beck was born in 1944 to Arnold and Ethel Beck at 206 Demesne Road, Wallington, England. At the age of ten, Beck sang in the church choir. Before learning to play the guitar, he tried his hand at the piano, drums and cello.

After school, Jeff entered the Wimbledon College of Art, and began playing the guitar when he heard the Chicago bluesmen Muddy Waters and Buddy Guy in the early 60s, whose records were then collecting. In 1964, Beck joined the rhythm and blues group Tridents and attracted the attention of Jimmy Page, on whose recommendation he joined The Yardbirds in March 1965, successfully replacing Eric Clapton, who left The Yardbirds and briefly joined the group John Mayall & the Bluesbreakers. The twenty months that Beck spent with The Yardbirds was perhaps the most creative period in the history of the group, but in October 1966, during an American tour, Beck was fired from the group for not showing up constantly, as well as for difficulties caused by his perfectionism and complex nature.