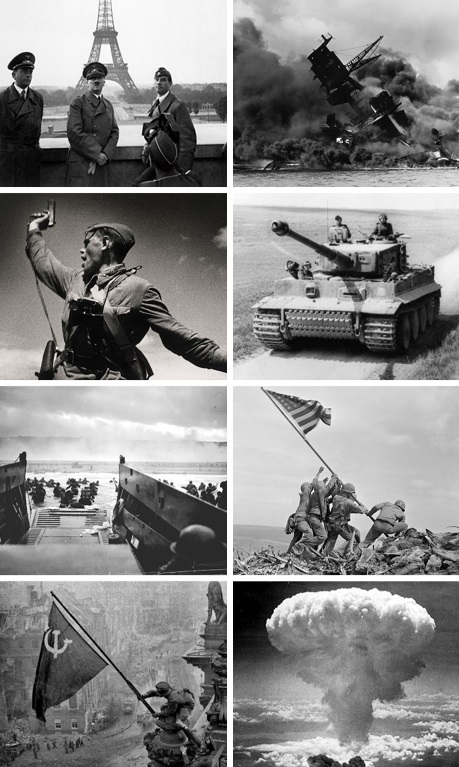 World War II (September 1, 1939 - September 2, 1945) - the war of two world military-political coalitions, which became the largest armed conflict in the history of mankind. It was attended by 62 states out of 74 that existed at that time (80% of the world's population). The fighting took place on the territory of Europe, Asia and Africa and in the waters of all oceans. This is the only conflict in which nuclear weapons have been used. More than 70 million people died as a result of the war, most of them civilians.

The number of countries involved varied over the course of the war. Some of them were active in the war, others helped the Allies with food supplies, and many participated in the war only nominally. The anti-Hitler coalition included: Poland, Great Britain (and its dominions: Canada, India, the Union of South Africa, Australia, New Zealand), France, Nepal - entered the war in September 1939; Ethiopia - Ethiopian troops under the command of the government of Ethiopia in exile continued guerrilla warfare after the annexation of the state in 1936, officially recognized as an ally on July 12, 1940; Denmark, Norway - April 9, 1940; Belgium, the Netherlands, Luxembourg - since May 10, 1940; Greece - October 28, 1940; Yugoslavia - April 6, 1941; USSR, Tuva, Mongolia - June 22, 1941; USA, Philippines, Honduras - since December 1941; China (the government of Chiang Kai-shek) - fought against Japan from July 7, 1937, officially recognized as an ally on December 9, 1941; Mexico - May 22, 1942; Brazil - August 22, 1942. During the war period, the Axis countries also declared war on the part of such states as Panama, Costa Rica, the Dominican Republic, El Salvador, Haiti, Nicaragua, Guatemala, Cuba, Argentina, Chile, Peru, Colombia, Iran, Albania, Paraguay, Ecuador, Turkey, Uruguay, Venezuela, Lebanon, Saudi Arabia, Liberia, Bolivia, however, these states did not take part in hostilities, and a nominal declaration of war was made by many of them only at its very final stage , between April and May 9, 1945. During the war, some states that left the Nazi bloc joined the coalition: Iraq - January 17, 1943; Box