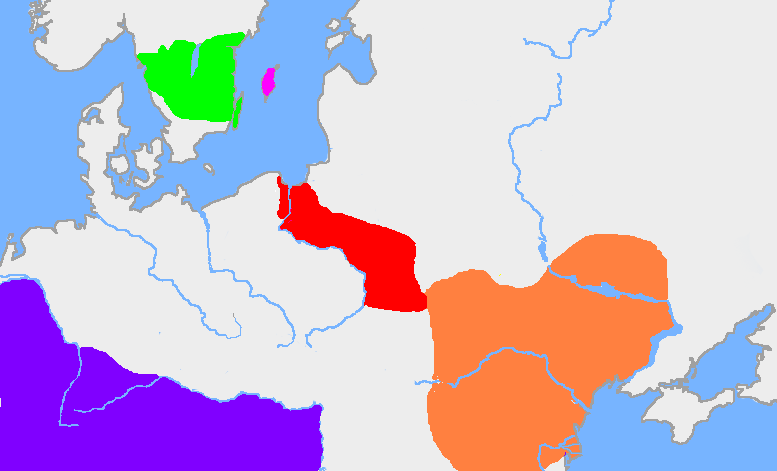 Goths (Gothic 𐌲𐌿𐍄𐌸𐌹𐌿𐌳𐌰, Gutþiuda; lat. Gothi, Got(h)ones, - Gutons; other Greek Γόθοι, Gonthi) - an ancient Germanic union of tribes. From the 2nd century A.D. e. until the 8th century A.D. e. played a significant role in the history of Europe. It was an association of Germanic tribes, probably of Scandinavian origin, who spoke the East Germanic Gothic language (for which Bishop Ulfilas developed the Gothic script in the 4th century AD). In the first centuries of our era, they began their journey from the Scandinavian Peninsula and gradually settled to the Northern Black Sea region and the Danube River, reaching the outposts of the Roman Empire. Christianity spread among the Goths in the 4th century.

The generally accepted opinion is that the Goths formed in Scandinavia, in the area that Jordan calls Scandza, one of the first attested states with centralized power in Europe, 2nd century AD, about its first king Berig, it is written below (probably Skane peninsula). In the 2nd century A.D. e. under King Berig, the Goths crossed the Baltic Sea and occupied the lower reaches of the Vistula, where archaeological sites of the Velbar culture are found (Jordan calls this area Gotiskandza). Displaced by the Goths from the territory of modern Poland, the Vandals and Rugs began to move south, forcing the local population to shift towards the Mediterranean. Hence - the first onslaught of the barbarians on the northeastern borders of the Roman Empire, which she felt under Marcus Aurelius (2nd century AD). At the same time, John de Galonifontibus in the book "Knowledge of the World" noted the following: "The Goths claim to be descended from the Scots and speak like the English." Probably, the author of these lines compared the name of the Goths with the ancient name of the Scots - Scots. The fifth king after Berig, the Goths Filimer, brought them to the lands of the Getae and Scythians (the Dnieper region). According to Jordan, the Goths from the banks of the Vistula reached the northern coast of the Black Sea, settling between the Dnieper and the Sea of ​​Azov. This is the only thing known about the arrival of the Goths in the Northern Black Sea region from written sources. According to the area of ​​monuments of the Chernyakhov culture, the area of ​​settlement of the Gothic tribes by the 4th century extended from the Seversky Donets in the east to the Carpathians and the lower Danube in the west. On the territory of present-day Ukraine