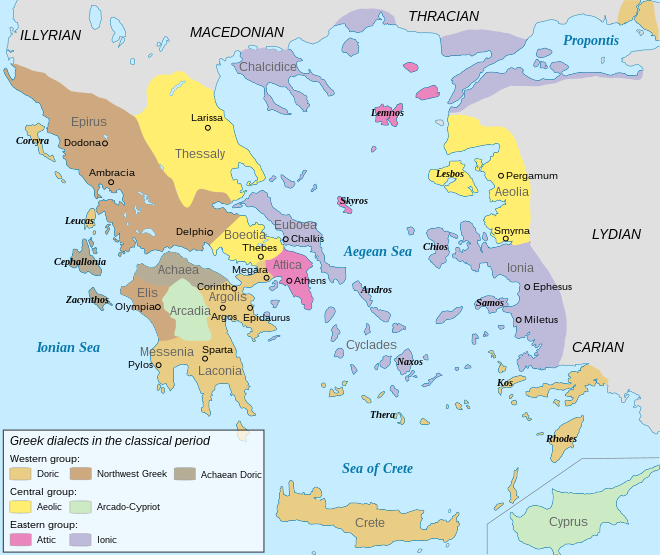 Ancient Greek (self-designation ἡ Ἑλληνικὴ γλῶσσα [γλῶττα], hē Hellēnikḗ glôssa [glôtta]) is the language of the Indo-European family, the ancestor of the Greek language, widespread in the territory of the Greek ecumene in the era from the beginning of the 2nd millennium BC. e. until the 4th century AD. Today it is used in churches and monasteries of the Orthodox Churches of Constantinople and Hellas. There are different periods of language development: Proto-Greek (XX-XVII centuries BC), Mycenaean (XVI-XII centuries BC), Post-Mycenaean (XI-IX centuries BC), Archaic (VIII-VI century BC), classical (V-IV centuries BC), Hellenistic (III century BC - IV century AD). At each stage of the development of the language, there were significantly different dialects. Ancient Greek is the language of Homer's Iliad and Odyssey, the philosophy and literature of the golden age of Athens, the Septuagint (translation of the Old Testament) and the New Testament. It was spoken in the policies of the classical era, the empire of Alexander the Great and the kingdoms of the Diadochi, the ancient Greek language was the second official language of the Roman Empire and the main language in the early stages of the existence of the Eastern Roman Empire (gradually degenerating into medieval (Byzantine) Greek). In the Middle Ages, it became a model of the literary language of Byzantium, received the status of a classic in Western Europe during the Renaissance and influenced the development of the modern Greek language - Kafarevusy, in contrast to Dimotiki, which was focused not on the written tradition, but on the spoken language.

There are several theories about the origin of the Greek language. According to one of them, the language stood out in the process of migration of speakers of the Proto-Greek language to the territory of Greece, while the migration could have occurred in the period from the 25th to the 17th century BC. e. According to another version, tribes came to Greece who spoke the late Proto-Indo-European language, and phonetic changes took place here later, as a result of which the Proto-Greek language stood out from the Indo-European unity. The Proto-Greek language entered the centum isogloss, since the palatovular series of sounds coincided with the velar, however, it did not escape the influence of the satem group, as evidenced by the transition of labeovelar to dental sounds before the front vowels (proto-Greek *kʷe > τε п